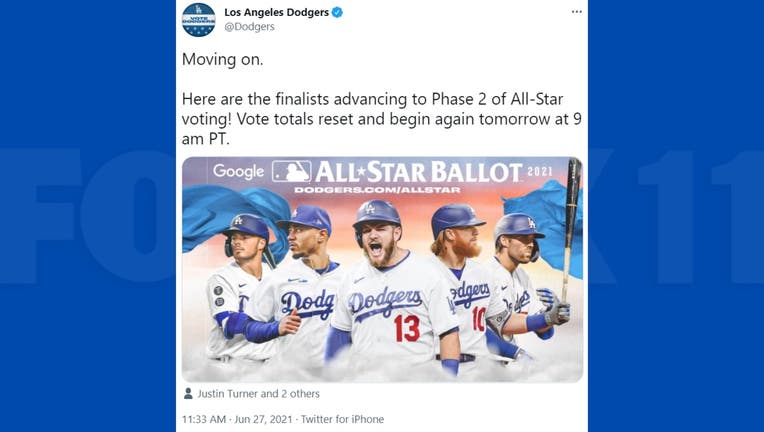 Muncy, who is hitting a .262 batting average and blasted 15 homers in 65 games this season, led all National League first basemen in fan votes in Phase 1 of the voting process. Lux ranked third among NL second basemen, Turner sat third among NL third basemen before joining Muncy in advancing to Phase 2 of the All-Star votes.

Betts and Taylor earned the fourth and fifth most fan votes respectively among NL outfielders before making the cut for Phase 2.

The next round of votes begins Monday, June 28 at 9 a.m. and ends Thursday, July 1 at 11 a.m. PT. Fans interested in voting for their favorite Dodgers or MLB stars can click here to cast their ballot.

Pitchers are selected through a combination of player votes and "choices made by the Commissioner's Office," according to MLB. Dodger standouts on the mound include 3-time Cy Young winner Clayton Kershaw, who won his ninth game of the season Sunday; Julio Urias, who also has nine wins so far this season; Trevor Bauer, who won seven games with a 2.57 ERA; Walker Buehler, whose record stands at 7-1 and a 2.51 ERA.

Kenley Jansen may have the strongest case among Dodgers pitchers to make the NL roster as the 3-time All-Star closer enters Monday with 18 saves and a 1.47 ERA.