An 18-year-old woman who was shot in the head by a Long Beach Unified School District safety resource officer was on life support and according to her family, she is brain dead.

LONG BEACH, Calif. - An 18-year-old woman who was shot in the head by a Long Beach Unified School District resource officer will soon be taken off life support, according to the attorney of the woman's family.

Luis Carrillo, the attorney of Mona Rodriguez's family, told FOX 11 late Thursday night that Rodriguez will be taken off life support on Friday, October 1. The latest comes about a day after her family revealed Rodriguez was declared brain dead after the shooting.

Rodriguez is a mom to a 5-month-old boy. 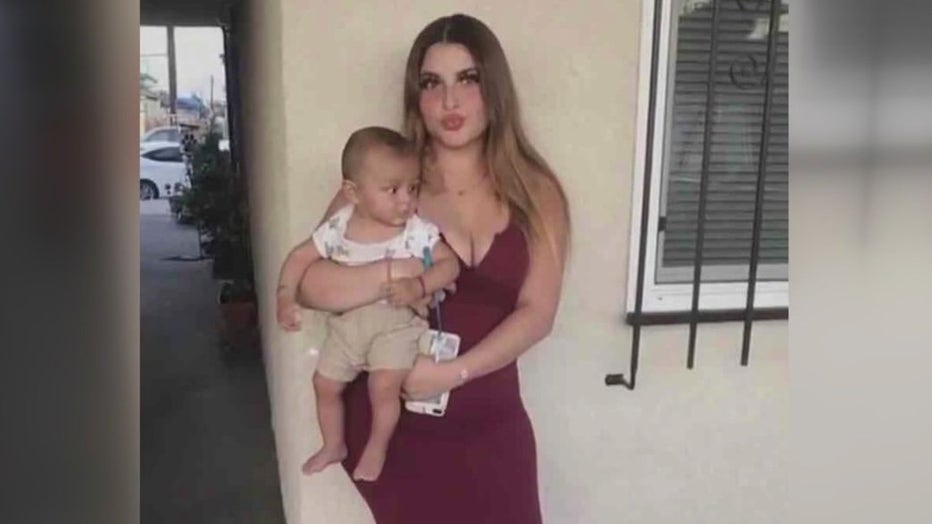 The Long Beach Police Department responded to a call of a shooting near Millikan High School a little before 3:15 p.m. Monday. Upon arrival, officers learned an 18-year-old woman was shot in the head by a Millikan's school resource officer near Spring Street and Palo Verde Avenue.

According to a statement issued by the Long Beach Unified School District, the resource officer was responding to an alleged fight between the woman and a 15-year-old girl. When Rodriguez, a man and a boy tried to leave the fight scene in a gray car, the school resource officer opened fire, hitting the woman, Long Beach PD said.

Rodriguez was sitting in the front passenger seat when she was shot, police say.

Relatives of the woman shot by a Long Beach school security officer were joined by activist Najee Ali at a news conference where they demanded the officer's arrest and prosecution.

Rafeul Chowdhury, Rodriguez's boyfriend of two years and the boy's father, got emotional outside Long Beach Memorial Care Hospital, saying, "I want justice for my girl, my baby momma, the love of my life."

Asked what he would say to the public safety officer who shot Rodriguez, Chowdhury said, "I just want him in jail, bro."

"I want him in jail for what he did to my girlfriend," he said. "She did not deserve it. I can't even sleep through the nights. I'm going crazy for myself, you know. I'm used to seeing her 24-7."

A woman is fighting for her life at an area hospital after being shot by a school resource officer in Long Beach Monday afternoon.

Community activist Najee Ali told FOX 11 shortly after the shooting that Rodriguez was on life support.

"I want to know, where is the outrage?" Ali said during a news conference Wednesday. "Where is the concern from the mayor of Long Beach, from the city council people, from the leaders. I've been at this hospital from the very moment I heard that she was shot in her head, to try to support and help the family. I've been here. I have not see the mayor, city council, our elected leadership show any concern for the victims."

On Tuesday night, her friends were spotted leaving candles and prayers at the shooting scene.

According to Long Beach PD, a 20-year-old man and a 16-year-old boy were also involved in the brawl. However, police are investigating their "participation level" in the fight.

"On September 27, at approximately 3:13 p.m., while conducting safe passage for students leaving Millikan High School, a Long Beach Unified School District (LBUSD) school safety officer responded to an incident in the area of Spring Street and Palo Verde Avenue. The school safety officer approached a group of individuals to investigate an altercation, and during the course of that investigation, the school safety officer discharged their duty weapon and an individual was struck by gunfire. Long Beach Police Department is leading the investigation into the facts surrounding the incident, and LBUSD defers any questions regarding that investigation to them. At this time, no injuries have been reported by any Millikan High School students. Because of the pending police investigation, we cannot share any additional details.

Additional staff will be at Millikan High School tomorrow to support students. LBUSD encourages students and families to contact the Long Beach Police Department if they have any information about this incident."

The shooting is being investigated by the Long Beach Police Department and the Los Angeles County District Attorney's Office.