VENTURA COUNTY - A small plane made an emergency landing on the 101 Freeway on Memorial Day and the pilot and flight student aboard the plane spoke with FOX 11 about the landing.

The emergency landing took place at around 7 p.m. Monday near Reyes Adobe Road in the Agoura Hills area.

"We had just landed in Camarillo and then we were on our way back. We had gotten to the top of our climb which is 3500 feet. I wanted to take some pictures so Trevor [flight instructor] ended up taking control. I was listening to "Gypsy" by Fleetwood Mac, everything was great," said Brian Carson, the flight student.

However, Trevor Peterson, the flight instructor for OC Flight Lessons, and the soon-to-be military pilot noticed a problem with the Cessna 172 plane.

"The engine started running rough. We had kind of an abrupt change in how the engine was running. I noticed the oil pressure dropped. My initial gut reaction was to try to divert to Van Nuys. Pretty quickly, I realized that wasn't an option. We declared an emergency," said Peterson.

It was an alarming experience for Peterson and Carson as a student. 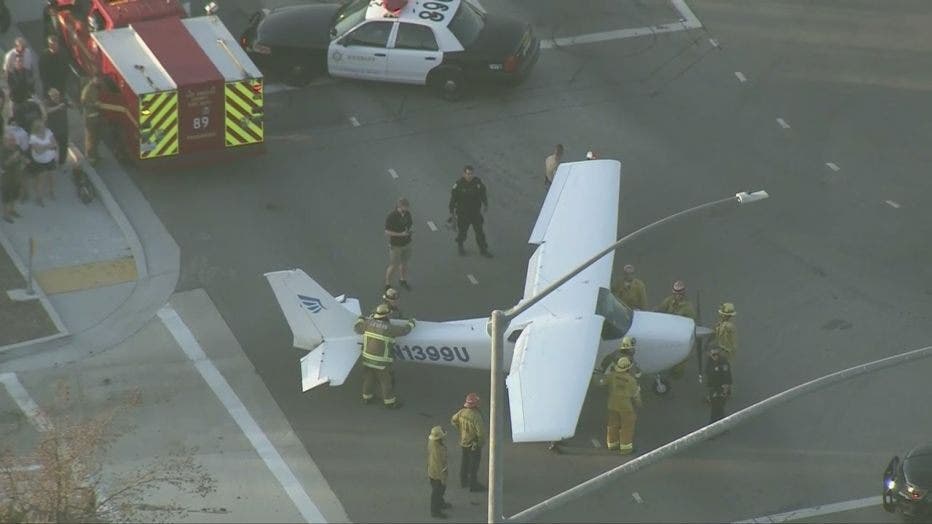 "When the engine first went out, I was thinking we might die so that was a little scary and then when he put the power back in, it started shaking more violently. I thought the plane might explode so that was another big scare," said Carson.

Peterson radioed air traffic control who told him the 101 Freeway was below for landing.

"You kind of revert to instinct. There was a moment of panic that quickly went away. I was extremely focused. This is exactly what we train for. This is what we train all of our students to do," said Peterson.

Peterson has been a pilot for four years and ended up landing the plane on the freeway without a scratch to the plane, other cars, and no one was injured.

"It was the first time I've ever shut the engine down in flight on a single-engine aircraft so in that sense it was different but in a lot of senses, it was exactly what I do every day three to four times per day," said Peterson.

Peterson said traffic was "fairly light" and he was able to spot a gap in between traffic for landing.

"I'm really thankful it wasn't backed up. Seven p.m. Memorial Day going back into Los Angeles, you expect that, but it all played into the assessment of where we were going to land," he said.

Law enforcement officials helped push the small plane off of the freeway after landing. Carson said he is grateful everyone is OK and Peterson landed the plane so well.

"I knew he was a great pilot so his landings have always been on par. It definitely makes me want to get better at my landings as well," said Carson.

Omar Amin, the owner of OC Flight Lessons, said he got the call about the emergency landing from Peterson shortly afterward.

"He [Peterson] goes 'Omar, I landed on the 101' so I could hear his voice and that's all I really cared about. I didn't care about the airplane. I knew he was safe," said Amin.

Amin described it as a "miracle" and said if Peterson was not aboard that aircraft as a pilot, there would have likely been a different outcome.

"It's amazing. It's a miracle there was no damage to people or property, not a scratch on the airplane. I can't thank him enough for doing a great job. It's amazing, reverting to his pilot skills. It's what we're taught from day one," said Amin.

Carson and Peterson know they will never forget the bizarre landing.

"Always the first question people ask you is what's the craziest thing that's happened to you or the most out there experience and this definitely tops it," said Peterson.

The cause for the emergency landing is still under investigation.