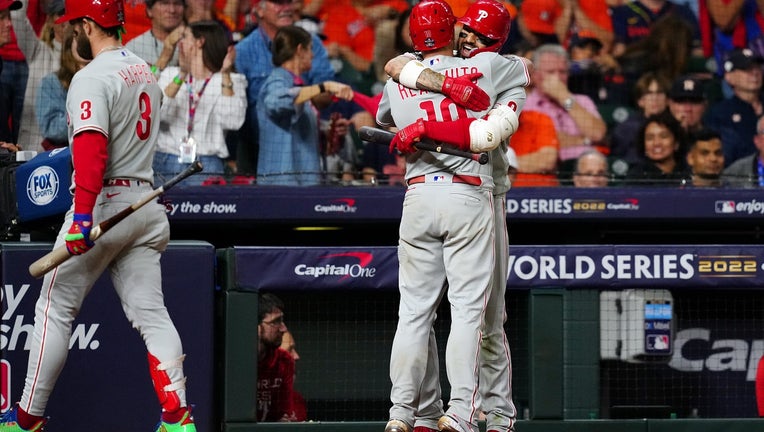 HOUSTON - The Fightin' Phillies lived up to their moniker, battling back from an early 5-run deficit to steal game one of the World Series in Houston.

It was the Kyle Tucker Show for the first three innings of the Fall Classic, as the 25-year-old Astros outfielder slugged a solo home run and three-run homer in back-to-back innings.

The Phillies started Fightin' down 5-0 in the 4th inning, answering with 2 out three-run rally punctuated by an Alec Bohm RBI double.

After a shaky start that only lasted 4+ innings, Phillies starter Aaron Nola kept the Astros bats in check in the bottom of the frame to keep it a 5-3 game.

The Phillies pulled even the very next inning, scoring two runs on a wall ball double by JT Realmuto.

Both teams' starters left the game after turning in lackluster performances. Nola served up 5 runs on 6 hits while tallying 5 strikeouts and a pair of walks.

Justin Verlander's postseason struggles continued, as he coughed up 5 runs on 6 hits in 5 innings of work.

In a game of bullpen's the advantage tilted to Houston's league-leading relief core, that continued to dazzle in the postseason, but the Phillies staff matched them into extra innings.

JT Realmuto made his early mark on the World Series in the 10th inning, clubbing a lead off opposite field home run to break the 5-5 tie.

The Phillies will look to steal another game in Houston on Saturday with Zack Wheeler on the mound opposite Framber Valdez.