A mom is reunited with her beloved Shih Tzu days after the dog was taken by a stranger.

GARDENA, Calif. - A dog owner is breathing a sigh of relief after she was finally reunited with her fur-daughter who was stolen from the groomers over the weekend.

"I was so happy. She was happy, she jumped out of the car, I picked her up," said Audre Turner, the dog owner. "Once I picked her up, she started licking me all over my face." 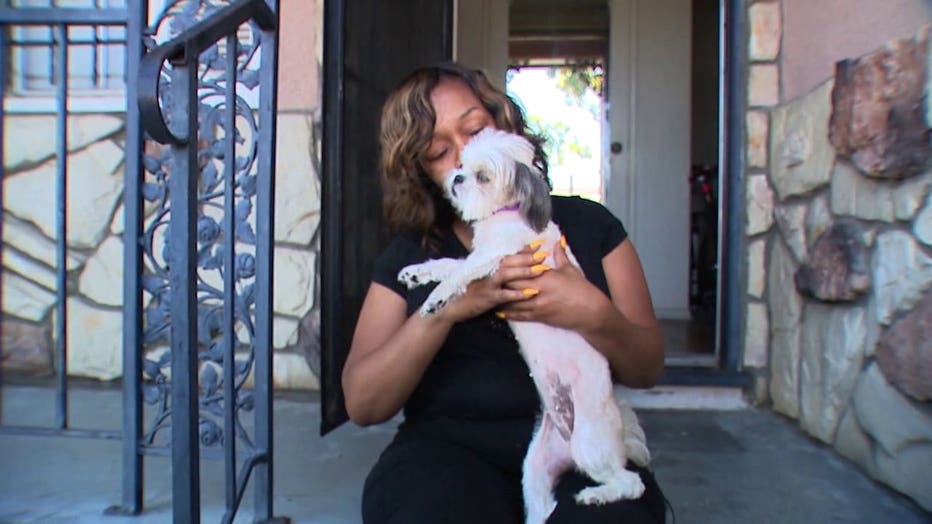 Her dog, Cotton, couldn't be happier to be home with Audre. The 11-year-old Shih Tzu has kidney problems and surveillance video showed another woman taking the dog from a Gardena groomer Saturday.

The woman, not Audre, gave Cotton a new name, told the groomers the dog was hers, paid the services in cash and left. The woman then gifted the dog to her daughter and grandsons at a family gathering over the weekend.

FOX 11 spoke with the woman's daughter, who opened up about her mom being accused of stealing Cotton.

"She just suffers from mental illnesses and when she saw the dog, she saw a dog that I had in the past who recently died from cancer," the daughter told FOX 11. "She must've thought the dog would've been a good idea for my two boys and myself."

A search is underway for a dog who was taken by a stranger at a Gardena grooming service.

The daughter saw the FOX 11 story Monday night that was posted on the Nextdoor app. She recognized her mother in the surveillance picture and tracked down Audre.

"If that was my dog that went missing, I know I would go crazy," the daughter said. "Those are just like our babies. Four-legged babies, so I knew the right thing to do was return that dog."

Audre tells FOX 11 she doesn't plan to file charges. The mom is just happy to have Cotton back.

The family who improperly brought the dog to their home over the weekend says they plan to adopt a rescue dog from a local shelter.

As for the $1,000 reward money that was set aside for the safe return of Cotton, both Audre and the Gardena grooming service agree the family should get the money. Even though the woman improperly walked away from the groomers with the dog, Audre commended the woman's family for doing the right thing returning Cotton.

But the daughter told FOX 11 they will not accept the reward money. While the family could certainly use it, the daughter said they don't feel right about it.