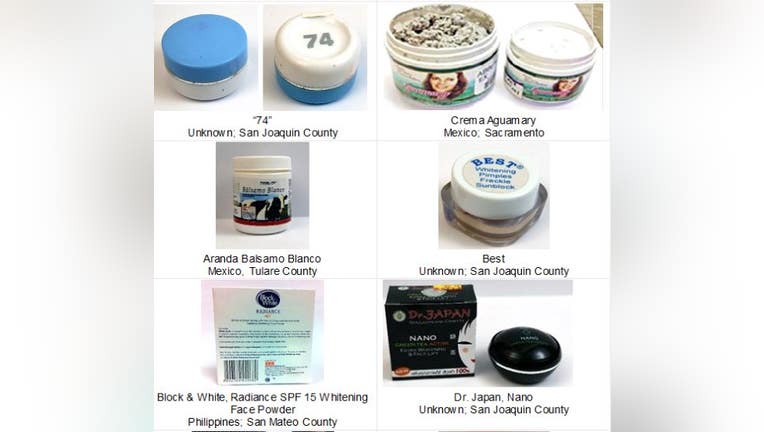 LOS ANGELES - A 30-year-old woman was arrested Tuesday on federal charges filed in Los Angeles related to skin care creams containing dangerous levels of mercury that she allegedly sold through advertisements on Facebook with promises that the illegal products could lighten skin color, remove age spots and treat acne.

Maria Estela Esparza Magallanes allegedly smuggled the creams into the United States from Mexico and marketed the products under the names Crema Esparza and Crema Jimena, according to the U.S. Attorney's Office.

Magallanes -- who would face up to 26 years in prison if convicted as charged -- is expected to make her first court appearance this afternoon in federal court in Fresno.

The three-count complaint, the result of an investigation by special agents with the U.S. Food and Drug Administration, charges Magallanes -- a resident of the Central Valley town of Orosi -- with selling adulterated and misbranded skin care products and smuggling the unapproved creams into the United States.

The affidavit in support of the complaint details how Magallanes allegedly sold the smuggled products to two specific victims and an undercover FDA-OCI agent with promises that the creams would treat various skin conditions and would lighten skin color. The Facebook page she used to market the products contained purported testimonials from customers and included before-and-afterphotos.

According to the affidavit, Magallanes sold the creams to the two victims in hand-to-hand transactions in parking lots in Tulare County, and she used the U.S. Postal Service to ship products on several occasions to the undercover agent.

During online communications with one of the victims and the undercover agent, Magallanes said she guaranteed her "natural" products -- one of which she claimed contained standard cosmetics ingredients, including lanolin, rose water and bee pollen, and one which she allegedly said was madeof "stem cells." The affidavit alleges that Magallanes told one victim that the products did not contain mercury and were sold pursuant to a license issued by California.

However, the creams allegedly sold by Magallanes to one of the victims and the undercover agent contained dangerous levels of mercury. The second victim was tested, which revealed mercury in her system, according to federal prosecutors.

In fact, according to the affidavit, a doctor with the FDA, who tested the products sent to the undercover agent, concluded: "The amounts of mercury in these products are very high. There is risk to the user, especially with chronic use, and there is risk to those around/in the user, especially infants and children and unborn babies. It is important to note that infants and children who are held by or rub up against a mother using these products can get it on their skin. The mercury will also evaporate from the product and be inhaled by the user and those around her."

U.S. Attorney Nick Hanna alleged that the defendant "marketed her illegal products on Facebook, intentionally misleading customers with false claims that the products were legal and safe to use. These dangerous creams, which were marketed to women in immigrant communities, jeopardized the safetyof women and children across California and in several other states."

Lisa L. Malinowski, Special Agent in Charge of the FDA Office of Criminal Investigations' Los Angeles Field Office, said: "Selling products with toxic levels of ingredients with unproven claims to treat medicalconditions can put users' health at serious risk. The FDA will continue to investigate and bring to justice those who put profits above the public's health and safety."

The California Department of Public Health has published a wide array of information about mercury-tainted face creams. In the wake of at least one serious injury resulting from mercury poisoning, the CDPH is actively involved in outreach efforts to provide educational materials, health information andcommunity-based resources to support women who may have used mercury face creams and their children who may have been exposed via skin-to-skin contact.

Health officials are urging consumers to immediately stop using the products and get blood tested for mercury poisoning.

They should put these creams in a closed Ziploc bag and contact the California Department of Public Health (CDPH) at (510) 981-4354 or AskEHIB@cdph.ca.gov.

Symptoms of mercury poisoning include memory loss, irritability,  depression, tremors, paresthesias, flushing, discoloration and hypertension, according to the U.S. Centers for Disease Control and Prevention.

Photos and information of contaminated products sold throughout California can be found by clicking here.