WASHINGTON, D.C. - The White House says National Guard troops along with other federal protective services were deployed to the Capitol to help end a violent occupation by President Donald Trump's supporters who are seeking to prevent the certification of the 2020 presidential election.

Pentagon spokesperson Jonathan Hoffman said Wednesday afternoon that defense leaders have been in contact with the city and congressional leadership.

A defense official said all 1,100 of the D.C. Guard were being activated and sent to the city’s armory. The Guard forces will be used at checkpoints and for other similar duties and could also help in the enforcement of the 6 p.m. curfew being implemented tonight in the city. 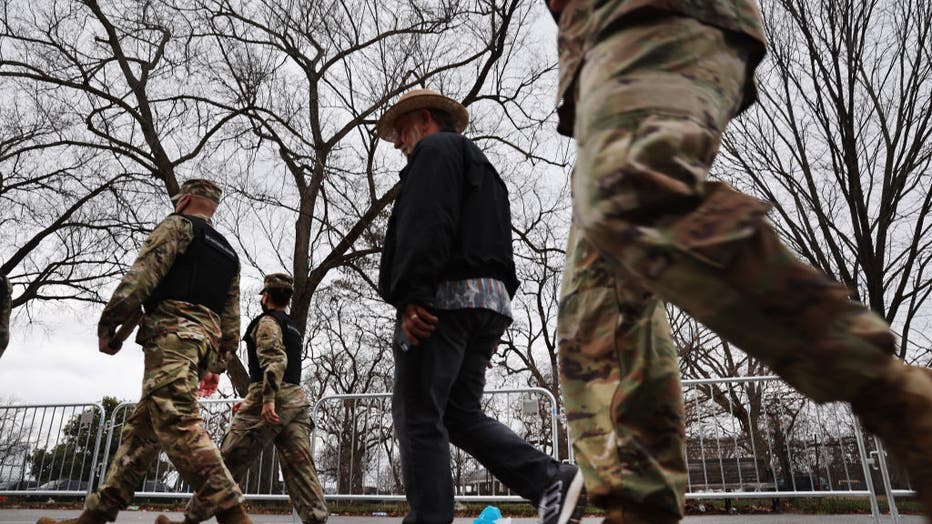 WASHINGTON, DC - JANUARY 06: Members of the National Guard Crowds walk as people arrive for the "Stop the Steal" rally on January 06, 2021 in Washington, DC. Trump supporters gathered in the nation's capital today to protest the ratification of Presi

Hoffman said the law enforcement response to the violence will be led by the Justice Department.

Press secretary Kayleigh McEnany tweeted that "At President (at)realDonaldTrump's direction, the National Guard is on the way along with other federal protective services."

She added, "We reiterate President Trump's call against violence and to remain peaceful."

Republican lawmakers have publicly called for Trump to more vocally condemn the violence and to call to an end to the occupation, which halted a joint session of Congress where lawmakers were beginning to count electoral votes.

Trump lost the November election to Democrat Joe Biden. He has refused to concede and has worked over the last two months to convince his supporters that widespread voter fraud prevented his own victory.

House Minority Leader Kevin McCarthy said he spoke with the president earlier Wednesday and told him to make a statement to "make sure that we can calm individuals down."

Florida Republican Sen. Marco Rubio tweeted that "it is crucial you help restore order by sending resources to assist the police and ask those doing this to stand down."

Republican Rep. Jeff Van Drew of New Jersey told The Associated Press that while he sympathizes with the protesters' position, they shouldn't get violent, and it would be "nice" if Trump called on them to "protest in a peaceful way in an appropriate spot, where you belong, where you should be."

Many Republicans had backed Trump's false claims of widespread voter spread to explain away his defeat to President-elect Joe Biden.

"This is Banana Republic crap that we're watching right now," said Gallagher, who had spoken out against objections from fellow Republicans to certifying President-elect Joe Biden's Electoral College vote.