Winds have been building overnight and fire officials reported gusts up to 40 mph so far.

For people in California, the Santa Ana and Diablo winds are something that they experience every year. However, people outside the West Coast may not be as familiar with these weather phenomena.

They are often blamed for increasing wildfire dangers, but they also bring some atypical weather to the usually Mediterranean-like climate of the California Coast.

Normally, winds along the California Coastline blow inland from the ocean. This is what gives that region such pleasant climates most of the year. During a Santa Ana or Diablo wind event, the wind patterns shifts offshore and brings in hot, dry air from the east side of mountain ranges that border the coast.

The Santa Ana and Diablo winds result from a strong difference in air pressure between two points. Since the atmosphere prefers to be balanced, the air rushes quickly from the area of high pressure to the area of low pressure.

"So in the case of these offshore winds, there is typically a strong high pressure that parks itself over the Great Basin, and you have a complimentary low pressure off of the California Coast, and that creates a really strong gradient," said John Abatzoglou, an associate professor of climatology at the University of California Merced. "Basically, the winds respond to that gradient."

Abatzoglou said topography can also play a role in the strength of the winds.

"The winds come up, and they come down these mountain passes, and as they do so, they undergo acceleration," Abatzoglou said. "You often see these corridors where Santa Ana winds, Diablo winds are particularly strong, right, and it's similar in many ways to the sort of confluence you'll see in a stream where you see local accelerations of flow down those mountain passes."

The result is winds that can reach 60 to 70 mph in some places nearest to the passes.

"As you get farther away from the mountain, as you get down into there, sort of like downtown Los Angeles for Santa Ana winds, the wind speeds aren't nearly as strong," Abatzoglou said. 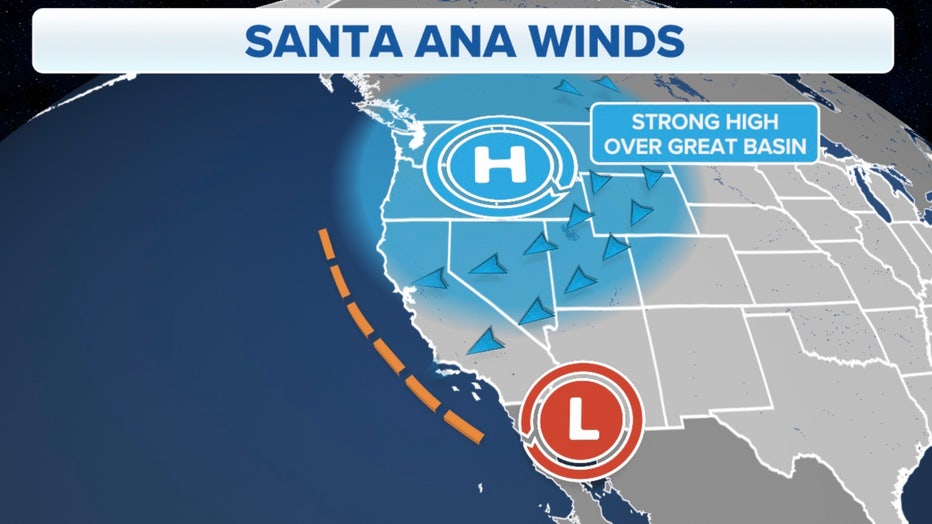 When do they usually occur?

Both the Santa Ana and Diablo winds can happen any time of the year, but they are typically cool-season phenomena, according to Abatzoglou.

"They typically commence in, you know, late September, October, right, and then they go throughout the winter," Abatzoglou said. 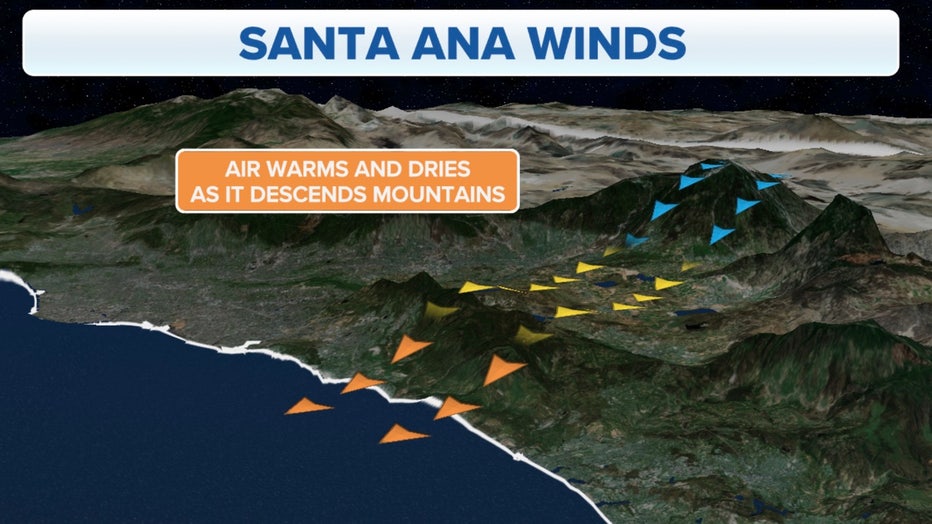 How are they connected to wildfires?

There is no direct connection between wildfires and the Santa Ana or Diablo winds. However, they can increase the risk of wind-driven fires if they occur during wildfire season.

"For wildfire risk, you need to have, first of all, enough fuel and that fuel to be dry enough, and so we typically think about the fire season, which we define as basically when fuels are available when they're dry enough," Abatzoglou said. "In Mediterranean climates, like we see in California, that can be quite long. It can go from late spring into autumn. We've seen a few years where it's gone into December."

That means there is a window when wildfire season and the windy season can intersect.

"When we move into September, October, November, that's when we begin to worry about the wind-driven fire season in these coastal environments," Abatzoglou said.

Warmest weather of the year is in the fall

The hot, dry air that is pushed to the California coastline during Santa Ana and Diablo wind events can produce some of the warmest weather of the year for coastal communities in what is typically a cool time of the year elsewhere in the country.

"That about-face in terms of getting your typical marine air switched with the desert, desert wind can basically produce some of the warmest weather in the fall," Abatzoglou said. "In fact, if we look at some of the coastal locations and we look at their all-time temperature records, some of those have occurred during these significant wind events in the autumn."

‘It can be quite wild’

Abatzoglou, who grew up in Southern California, said these Santa Ana and Diablo wind events can be strange things to experience. He said he would liken it to suddenly living in a completely different place.

"What you can experience, right, is these incredibly, just really warm days, windy ... days in the 90s, in December ... that are just like, ‘What in the world is going on?’ Abatzoglou said. "It’s, it's almost as if you've been transported to a completely different location or season."

In addition to the unusually warm days, the California coast can also experience some of the coldest nights of the year.

"You can also see incredibly cold overnight lows because they bring in such dry air," Abatzoglou said. "When your air mass is incredibly dry, it's quite easy to cool, cool down at night."