Besides the L.A. County Mountains, areas covered by the red flag warning include the Santa Clarita and San Fernando valleys, the Malibu coast and the Santa Monica Mountains. The red flags also extend to much of Ventura County.

Besides the Los Angeles County Mountains, the Red Flag Warnings include the Santa Clarita and San Fernando valleys, the Malibu coast and the Santa Monica Mountains, as well as Ventura County.

According to the National Weather Service Los Angeles, this is the first strong Santa Ana wind event of the season. 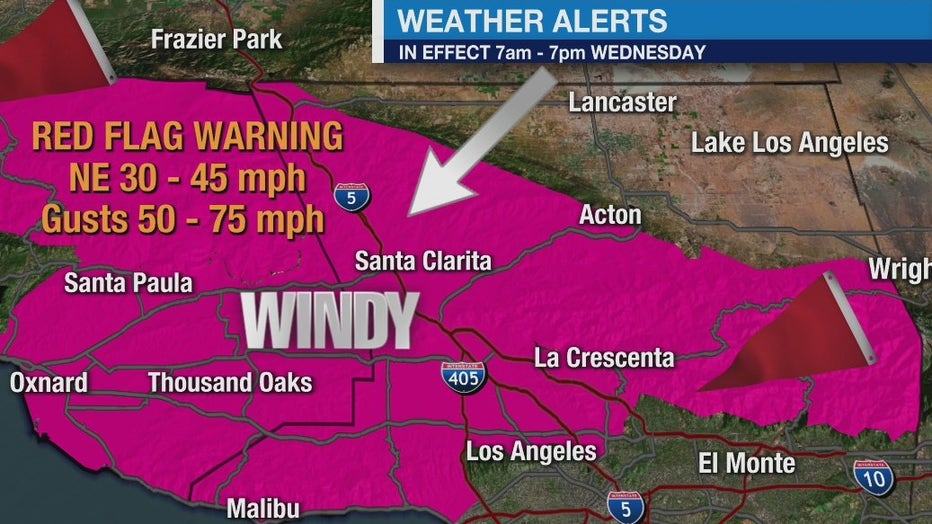 The coastal and valley areas will likely see peak wind gusts ranging from 40 to 60 mph, while the LA County mountains are expected to see gusts of up 55 to 75 mph.

A high wind warning will be in effect until 7 p.m. Wednesday in the Los Angeles County Mountains, Santa Clarita Valley, San Fernando Valley, Santa Monica Mountains and the Malibu coast.

Gusts of up to 65 mph could pound mountain and some valley areas, according to the National Weather Service. Isolated gusts of up to 75 mph are possible in the western Santa Monica Mountains, forecasters said.

A less severe wind advisory will be in effect until 7 p.m. Wednesday in the San Gabriel Valley. Forecasters said foothill areas could see winds of 20 to 30 mph, with gusts up to 50 mph.

Because of the gusty winds and low humidity, there will be heightened fire weather conditions across both LA and Ventura counties.

"If fire ignition occurs there could be rapid spread of wildfire that would lead to a threat to life and property," according to the weather service.

Winds have been building overnight and fire officials reported gusts up to 40 mph so far.

"Damaging winds will blow down large objects such as trees and power lines," the weather service warned. "Power outages are expected. Travel will be difficult, especially for high profile vehicles."

"People should avoid being outside in forested areas and around trees and branches," the agency added. "If possible, remain in the lower levels of your home during the windstorm, and avoid windows."