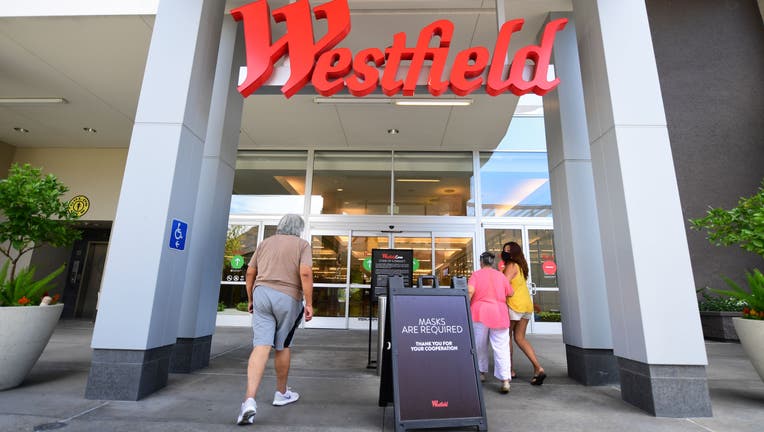 People walk past a sign reminding shoppers of the mask requirement while entering the Westfield Santa Anita shopping mall on June 12, 2020 in Arcadia, California. (Photo by FREDERIC J. BROWN/AFP via Getty Images)

LOS ANGELES - One day after a group of business owners filed a federal lawsuit against Los Angeles County, challenging its COVID-19-related closure of Del Amo Fashion Center, the largest operator of indoor malls in the region pressed for the reopening of its shopping centers for the sake of store owners, employees and tax revenue.

In a letter to the Los Angeles County Board of Supervisors, Unibail-Rodamco-Westfield writes that the county's treatment of indoor malls "appears to be arbitrary and based on the misconception that these facilities are less safe than functionally equivalent big box retailers that have been allowed to operate throughout the pandemic.''

"They have significantly larger interior pavilion space, easily separated entrances and exits, as well as extensive security infrastructure; all of which allows indoor malls to maintain separation among guests that is not possible at the average grocery store or big box retailer,'' according to the letter signed by Jean-Marie Tritant, URW's president for United States operations.

"There is no doubt that indoor malls are as safe, if not safer, than hair salons, which the county has seen fit to allow to operate while refusing indoor malls the same right.'' 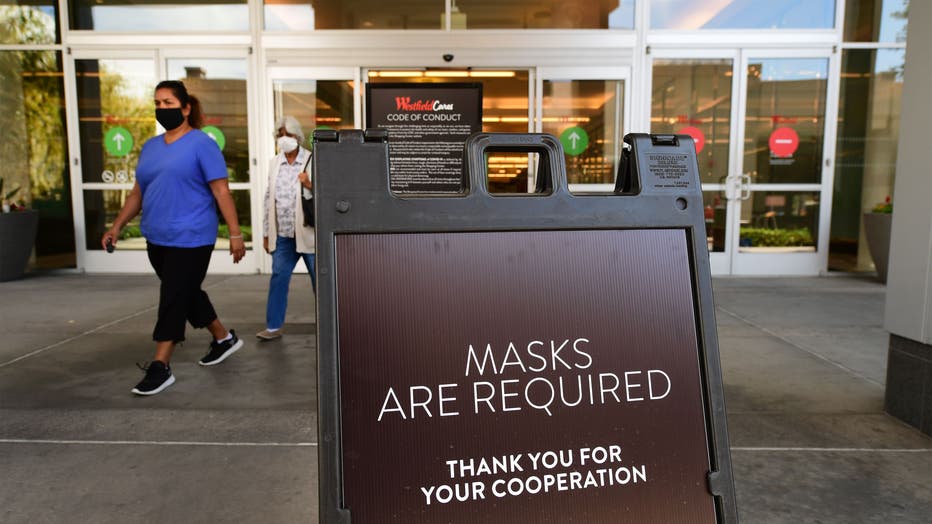 Women wearing facemasks exit a shopping mall where a sign is posted at an entrance reminding people of the mask requirement Westfield Santa Anita shopping mall on June 12, 2020 in Arcadia, California. (Photo by FREDERIC J. BROWN/AFP via Getty Images)

The letter comes a day after the county was hit with a proposed class action suit filed late Thursday in federal court challenging its COVID-19 related closure of Del Amo Fashion Center in Torrance and other indoor malls.

The decision not to allow indoor malls to open in Los Angeles County appears unfair since the malls are open and operating safely elsewhere in the state, the complaint contends.

However, indoor shopping centers and their interior retailers in the county "uniquely remain closed, and many of their employees ... remain out of work -- without any explanation or any scientific support,'' the complaint alleges.

According to attorneys for plaintiffs Del Amo Fashion Center Operating Co. LLC and retailer Rivas Sports Inc., no evidence shows that indoor malls pose a greater risk of spreading COVID-19 than other retailers, including hair salons and barbershops, which the county has allowed to reopen.

The county's Department of Public Health declined to comment on the pending litigation, but stated that it continues to apply science and state health guidelines as signposts to reopenings.

"From the onset of the pandemic, Los Angeles County has been intensely committed to protecting the health and safety of its residents through an unprecedented crisis using science and data and responding in real time to a deadly and previously unknown virus that has tragically claimed thousands of lives and upended life for millions of people -- not just in Los Angeles County but across the nation and around the world,'' according to the county's statement.

The retailers allege that their due process rights are being violated because they have been allowed no way to challenge what they say is the "lack of any rational basis for the county order.''

According to its letter, Westfield malls collectively employ over 24,000 local residents, "making us one of the 10 largest sources of employment
locally -- including being the second largest source of employment in the
corporate sector. Our local shopping centers generate approximately $400
million in sales taxes and over $40 million in real estate taxes on an annual
basis.''

The decision to prohibit indoor malls from operating, "while allowing functionally equivalent, large retailers to operate inflicts undue hardship on URW, our tenants, and the thousands of Angelenos whose livelihoods depend on
indoor malls being open,'' according to the letter.