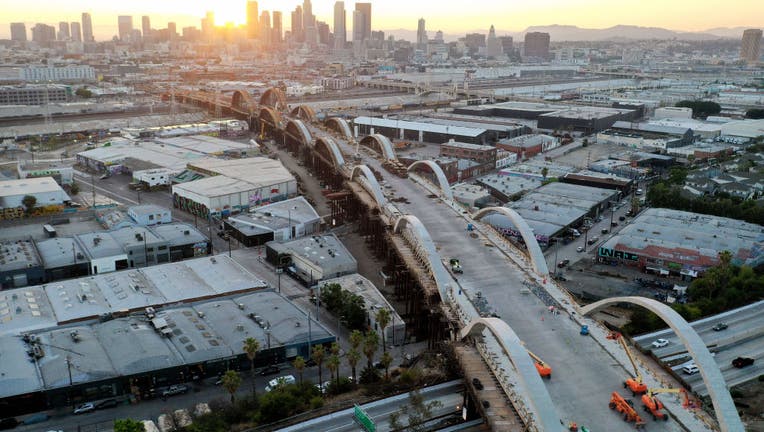 LOS ANGELES - The full closure of a 2 1/2-mile stretch of the 101 Freeway east of downtown will continue Saturday, as part of a project to replace the Sixth Street Viaduct.

The closure -- between the 10 Freeway on the south and the "5/10/101" freeway interchange on the north -- began Friday at 10 p.m. and will stretch through 3 p.m. Sunday, according to the city of Los Angeles Bureau of Engineering.

Motorists traveling westbound on the 60 Freeway from the Pomona area will not be able to access the 101 Freeway during those times. Those motorists will be detoured north on the 710 Freeway to the westbound 10/101 Freeway. Southbound motorists on the 101 can take the 110 Freeway south, then head east on the 10 Freeway to bypass the closed freeway section.

"As installation of the cable hangers along the arches over the 101 Freeway has completed, that span is now fully supported and no longer requires the supporting falsework under the bridge," a city statement said. "The contractor will remove the falsework."

A stretch of the 101 Freeway east of downtown LA is closed until Sunday for replacement work on the Sixth Street Viaduct.

The work is part of the city's $588 million Sixth Street Viaduct Replacement Project, replacing a 1930s-era structure that is considered seismically unsound.

The new viaduct, set to be completed in summer of next year, is the largest bridge project in city history.