One day after approving a restriction that will limit outdoor watering to once a week for millions of Southern California residents and businesses, leaders of the region's water wholesaler said Wednesday they needed to take unprecedented steps to respond to what they call an unprecedented drought, and even tougher rules could soon follow.

CALABASAS, Calif. - Art Hermosura has lived with his family in Calabasas for 30-years. He's proud of his front yard, but a little annoyed that part of it is dying and brown.

Soon it is likely to be completely dead. Metropolitan Water District officials during a news conference said we have a water shortage emergency. "We're seeing conditions unlike anything we've seen before." They say the problem is climate change - warm and dry conditions, "But, it's happening sooner than anyone expected."

Over the last three years our water supply has dropped precipitously. So, new restrictions are being put in place starting June 1st which includes watering outdoor yards only once a week and no more.

Herosura says, "There's no rain, yea, so, of course we have a water shortage. We have to comply with that rule." But, according to neighbor Steven Braun, "It's tough. It's rough. I have a huge property and I've got grass and trees." He understands. Others, who didn't want to be on camera aren't happy about it, but to Braun, "Ya gotta do what you gotta do, you know?" 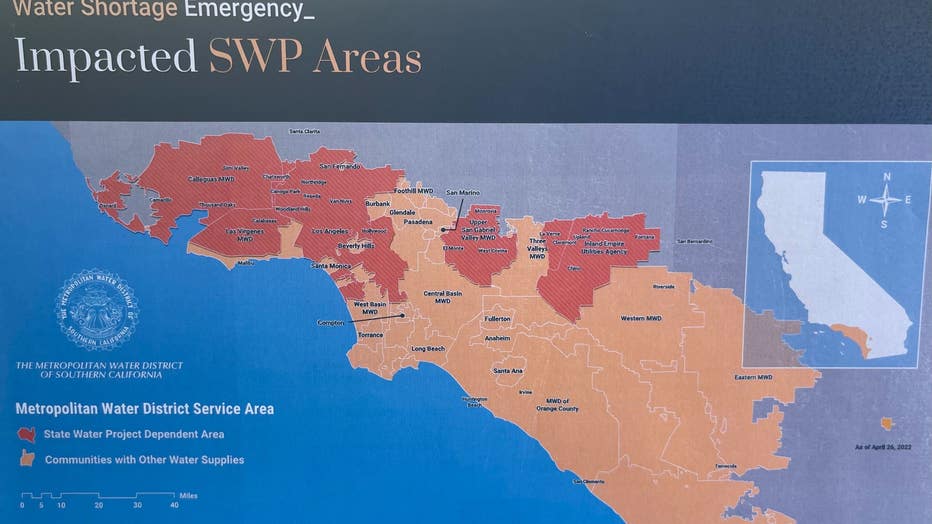 So, will this be enforced? MWD officials say it will fine the agencies it supplies for going over monthly allotments and that could be passed on to consumers depending on the local water agency. For instance, in the Las Virgenes Water District they'll do two things. They'll have penalties for chronic violators. First, there would be a warning. And, they'll use flow restrictors to slow the flow of outdoor water to violators.

Mike McNutt with LVWD says, "We will do this after somebody's third offense of going over 150% of their allocated water."

He adds notices will be in the form of door hangers from water department street patrols. Says McNutt, "This is an unprecedented moment in time. I mean we all have to come together to make this work."