LOS ANGELES - In honor of Veterans Day, FOX Corporation and its employees are coming together with the organization U.S.VETS to support our country’s veterans and military.

From wearing camouflage to spreading awareness to providing donations, here are a few ways you can honor those who have served:

Spread awareness with ‘Make Camo Your Cause’ campaign

The organization U.S.VETS seeks to bring visibility and awareness to the struggle of homeless veterans with the mission to end veteran homelessness in the United States, and its CEO intimately understands the struggle of many who have served — he’s a veteran himself.

"I was a Marine in Vietnam in 1969 and ‘70 and that is obviously a significant experience in anyone’s life," Steve Peck, the organization’s CEO and president, told FOX Television Stations. "I was quite disturbed by what I saw and did over there."

RELATED: ‘Make Camo Your Cause’ campaign brings struggle of homeless veterans to light

U.S.VETS launched its campaign called "Make Camo Your Cause" to establish the camouflage print as the official symbol to honor veterans.

"We have the vision of connecting camo to what we do, so whenever you see camo one day, we hope people connect that to supporting and ending veteran homelessness," Shalimar Cabrera, the executive director of U.S.VETS, said.

In order to bring visibility and awareness to the campaign, FOX is asking businesses to purchase apparel from its U.S.VETS online shop, wear camouflage this Veterans Day and post on social media using #HONORUSVETS.

Click here to purchase a t-shirt for a great cause.

"Camo was designed to conceal and protect our soldiers in combat. Today, in America we wear camouflage to stand out from the crowd and to demonstrate our patriotism and pride," the organization wrote. "With your support, #HONORUSVETS will give camo a new meaning, showing the community you believe our veterans deserve every opportunity to live with dignity and independence." 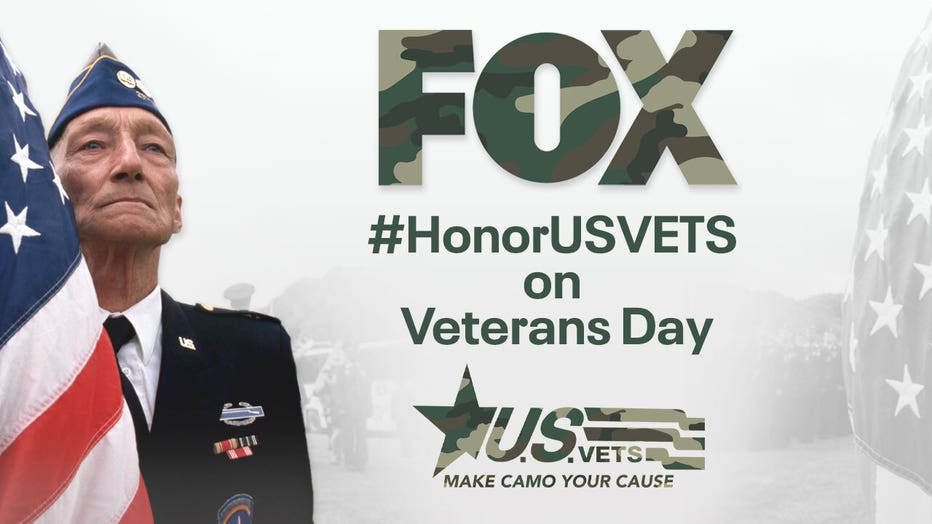 The FOX Corporation and its employees are coming together with the organization U.S.VETS to support our country’s veterans and military in honor of Veterans Day 2021.

Businesses and organizations are also coming together to thank and honor veterans and active-duty service members with free goods, services and discounts on Nov. 11.

In addition, businesses such as Dollar General, Great Clips, Publix and Wyndham Hotels & Resorts are offering exclusive deals and discounts for those who have served our country.

Volunteer or donate to U.S.VETS

U.S.VETS is also looking for volunteers in the fight against veteran homelessness.

Employers can "hire a vet" through the U.S.VETS Career Network, which connects professional and student veterans with lasting careers they love.

RELATED: ‘Make Camo Your Cause’: U.S.VETS leaders say goal is to ‘put ourselves out of business’

Donations to the organization can also be made on its website.

"We’re hoping to put ourselves out of business," Shalimar Cabrera, the executive director of U.S.VETS, said. "We’re hoping that someday this tragedy doesn’t exist anymore."

"But, our work remains unfinished until there are no more homeless veterans on the streets," Cabrera said.

Founded by veterans to serve veterans, U.S.VETS is a nonprofit organization designed to help veterans and their families transition from homelessness by offering tailored support to gain independence.

"‘The streets’ are simply no place for veterans; no place for the many men and women who volunteered, giving of themselves and their youth, to protect our great freedoms," the organization wrote. "We believe all veterans deserve every opportunity to live with dignity and independence. It is our duty at U.S.VETS to deliver on our promise to always serve those who’ve served."

Interview with leaders of U.S.VETS

The organization has 32 sites across 11 regional locations in California, Nevada, Arizona, Hawaii, Texas, and Washington D.C. and offers temporary and permanent housing solutions and comprehensive services to veterans and their families nationwide.

The organization also provides everything from outreach on the streets, life skills training, employment assistance, counseling and case management.

Cabrera said the organization strives to wrap support around homeless veterans so ultimately "they can regain their independence."