LOS ANGELES - In a trend described as "very worrisome,'' the number of people getting their first COVID-19 vaccination at Los Angeles County sites dropped significantly over the past week, marking the first such drop and leading to more calls today for people get the shots and propel the county toward a return to normalcy.

County Public Health Director Barbara Ferrer didn't have exact number of how many appointments went unfilled over the past week, but said county-operated vaccination sites saw sharp drops in people coming in for their first dose. That means the county, for the first time, will likely fall short of its goal of administering 95% of the doses it receives within one week.

"This would not be the time to sort of lose momentum on vaccinations. Overall, almost all of the providers have said they had appointments that did not get filled this week. Some had a few, some had a lot. At our county sites, we're down at least 50% at all of our county sites in terms of filling appointments.''

Ferrer again issued a public plea for people to get vaccinated, noting that shots will continue to be offered without appointments at all county sites through at least next week.

According to the most recent statistics, more than 7.2 million doses of vaccine have been administered in the county, including more than 4.5 million first doses and more than 2.6 million second doses. Ferrer also pointed to notable improvements in vaccination rates among Latino and Black communities, which have been lagging behind in the inoculation effort despite having the highest case rates.

She tried to offer encouragement for people to vaccinated, pointing out that fully vaccinated people will inevitably have more ability to partake in and fully enjoy events outside their home.

"It is hard to have fun when you also have fear, and fear that the person on the next yoga mat may be an asymptomatic COVID carrier makes it hard to breathe deep and release,'' she said. "Fear that standing next to someone at Dodger Stadium might get you or your kids sick makes it hard to follow the
game. Fear that when you're with a friend at a house party that they can infect you might make it really hard to cut loose.

"Vaccination is an incredible tool for having fun without fear. With all the fear we've been living with over the past year, many of us may have forgotten what a fun place L.A. can be. We're so close to being able to reclaim all of that fun, and the ticket to doing that is getting ourselves, our friends, our families and our co-workers vaccinated.''

Ferrer noted that the county is on pace to move into the yellow tier of the state Blueprint for a Safer Economy next week. If the county still meets the criteria when new state figures are released next Tuesday, a revised health officer order loosening capacity restrictions on businesses will be issued Wednesday, and take effect on Thursday. 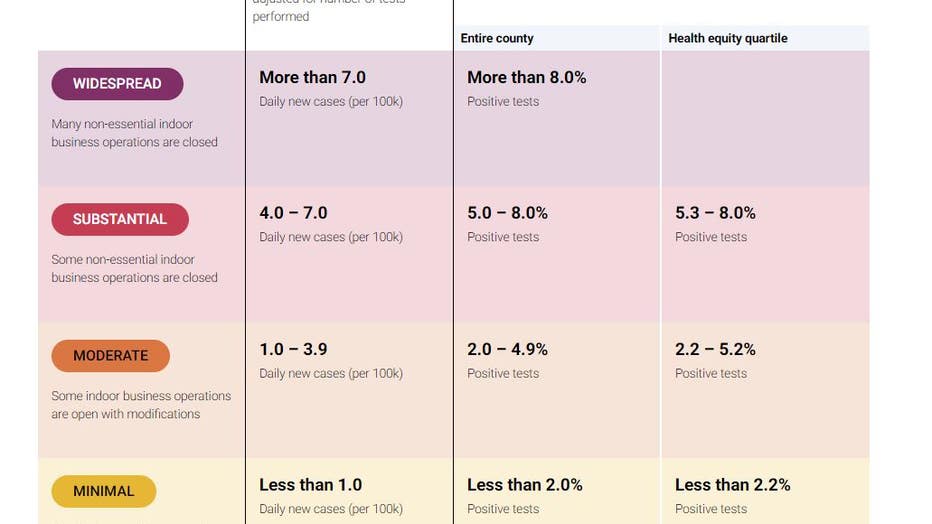 Moving to the yellow tier -- which is the least-restrictive in the blueprint -- would mean a larger allowable capacity at most businesses, gatherings and events, both indoors and outdoors. Fitness centers, cardrooms, wineries and breweries, for instance, would be permitted to increase indoor capacity to 50%, up from the current 25%; bars would be able to open indoors at 25%; outdoor venues such as Dodger Stadium could increase capacity to 67%, up from the current 33%; and amusement parks could allow 35%, up from 25%.

The county is revising its health order this week to incorporate changes in mask-wearing guidelines recommended this week for fully vaccinated people by the U.S. Centers for Disease Control and Prevention. The revisions also state that surveillance COVID testing is no longer recommended for fully vaccinated people, unless they work at skilled nursing facilities or other high-risk settings, are traveling internationally or are required by a particular business or facility.

Ferrer said the county will also be reviewing changes issued by the state allowing water parks to reopen.

The county reported another 42 COVID-19 deaths on Thursday, raising the cumulative total since the pandemic began to 23,872. Another 416 cases were confirmed by the county, while Long Beach health officials reported 22 and Pasadena added two, lifting the overall number from throughout the pandemic to 1,232,751.

According to state figures, there were 420 people hospitalized in the county as of Thursday, up from 410 on Wednesday, with 98 people in intensive care, down from 105 on Wednesday.