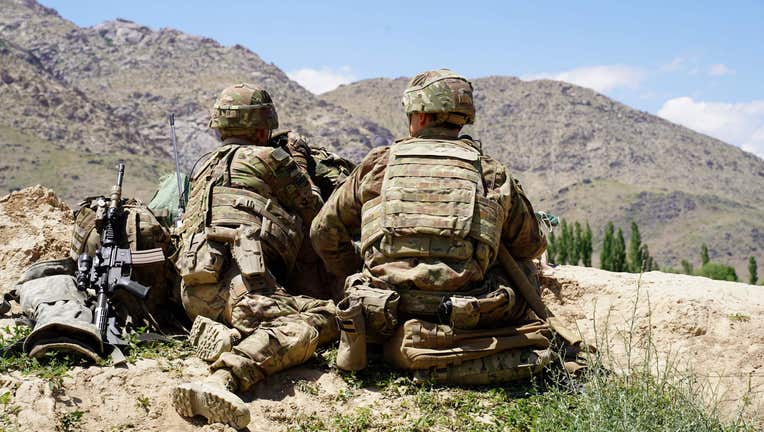 In this photo taken on June 6, 2019, US soldiers look out over hillsides during a visit of the commander of US and NATO forces in Afghanistan General Scott Miller at the Afghan National Army (ANA) checkpoint in Nerkh district of Wardak province. - A

The U.S. military has gone a full year without a single combat death in Afghanistan for the first time in 20 years.

Army Sgts. 1st Class Javier Gutierrez and Antonio Rodriguez were the last two Americans to die while fighting in the country one year ago on Monday. Two others, Army Staff Sgt. Ian McLaughlin and Army Pfc. Miguel Villalon, were killed in January of last year, as The Military Times first reported.

The Taliban has said it may still target U.S. military members, however, if President Biden decides to keep forces in the area beyond a May deadline to withdraw all U.S. troops in Afghanistan, according to the Military Times.

There are 2,500 troops left in Afghanistan, and the agreement between the Taliban and former President Trump stipulated that all of them should be removed by May 2021 as long as the Taliban holds up its end of the bargain to stop al Qaeda and other terror organizations from attacking foreign troops.

Sullivan said the Biden administration would review "whether the Taliban was living up to its commitments to cut ties with terrorist groups, to reduce violence in Afghanistan, and to engage in meaningful negotiations with the Afghan government and other stakeholders," according to the release.

Former President Barack Obama deployed an additional 17,000 troops to Afghanistan in his first 100 days in office, drawing the ire of progressives. The Taliban insurgency in the nation loomed over U.S. foreign policy.

The Taliban called on Biden to honor the U.S. commitment on Jan. 21, and Biden seemed ripe to do so. Last spring, he wrote in Foreign Affairs that the U.S. should withdraw a "vast majority" of its troops and "narrowly define" counterterrorism efforts.

Read more on this story from FoxNews.com.