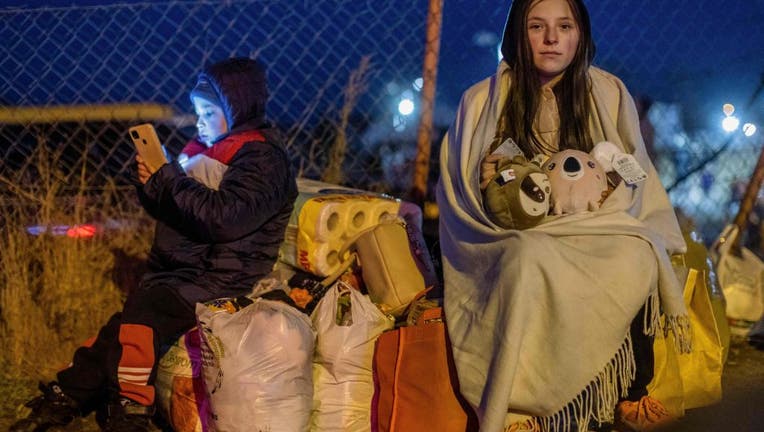 Helena (R) and her brother Bodia (L) from Lviv are seen at the Medyka pedestrian border crossing, in eastern Poland on February 26, 2022, following the Russian invasion of Ukraine. - Ignoring warnings from the West, Russian President Vladimir Putin u

MEDYKA, Poland (AP) - Dragging suitcases and carrying children, tens of thousands of Ukrainians rushed to the borders Saturday as invading Russian troops pressed on with their march toward Ukraine’s capital of Kyiv.

At least 150,000 people have fled Ukraine into Poland and other neighboring countries in the wake of the Russian invasion, the U.N. refugee agency said Saturday. Some walked many miles through the night while others fled by train, car or bus, forming lines miles long at border crossings. They were greeted by waiting relatives and friends or headed on their own to reception centers organized by neighboring governments.

"The numbers and the situation is changing minute by minute," said Joung-ah Ghedini-Williams, a spokeswoman for the U.N. High Commissioner for Refugees. "At least 150,000 people have fled, they are refugees outside of Ukraine. ... At least 100,000 people — but probably a much larger number — have been displaced inside Ukraine."

The agency expects up to 4 million Ukrainians could flee if the situation deteriorates further.

Those arriving were mostly women, children and the elderly after Ukrainian President Volodymyr Zelenskyy banned men of military age from 18 to 60 from leaving. Some Ukrainian men were heading back into Ukraine from Poland to take up arms against the Russian forces.

In contrast to other conflicts around the globe, Russia’s unprovoked attack on the Western-looking democracy has ignited a huge outpouring of support for the fleeing Ukrainians. This included an unconditional welcome from nations like Poland and Hungary that did not want to accept those fleeing conflict and poverty in the Middle East and Africa.

Regular people were also opening up their homes to refugees and volunteering at welcome centers. In Poland, a Facebook page was formed where people were offered rides in private cars from the border and other help.

Volunteers even came from elsewhere in Europe to pick up refugees, among them a German couple from Hamburg who held up a sign at the Polish border town of Medyka saying they could take three people home with them.

"Our country is not doing anything, and we felt we needed to do something," said Tanja Schwarz, 51.

Despite the goodwill, the crush of people became a very real ordeal.

Jeremy Myers, from Manchester, England, was on vacation in Ukraine with his Ukrainian girlfriend when the war started. They fled Kyiv and waited 23 hours in a fenced-off area where there was no food or water and which was controlled by armed guards on the Ukrainian side.

He witnessed people fighting, getting crushed and a woman who fainted.

"We saw several people get injured, there were no toilets, there was no medical assistance," he said. "You had to stand where you were because if you didn’t you lost your place in line."

One family from Chernivtsi in western Ukraine waited 20 hours before being able to cross the border into Siret in northern Romania. Natalia Murinik, 14, cried as she described saying goodbye to grandparents who couldn’t leave the country.

The largest numbers were arriving in Poland, where 2 million Ukrainians have already settled to work in recent years, driven away by Russia’s first incursion into Ukraine when it annexed Crimea in 2014 and seeking opportunities in the booming economy of the European Union neighbor.

Poland’s government said Saturday that more than 100,000 Ukrainians had crossed the Polish-Ukrainian border in the past 48 hours alone. Poland declared its border open to fleeing Ukrainians, even for those without official documents, and dropped its requirement to show a negative COVID-19 test.

The line of vehicles waiting to enter Poland at Medyka stretched many miles into Ukraine.

A woman from Lviv named Lena described seeing toys and heavy bags along the way that people had abandoned. She was bringing her four children to safety in Poland and planned to return to join her husband. Like other Ukrainians returning home as their country fights Russia, she would only give her first name.

Even Hungarian Prime Minister Viktor Orban, one of Europe’s most anti-migrant leaders, traveled to the border town of Beregsurany, where he said Hungary was accepting all citizens and legal residents of Ukraine.

"We’re letting everyone in," Orban said.

Among those arriving at that point were a Ukrainian-British family with their dogs. "We can’t leave our dogs," said Vlasta Terasova, arriving from Uzhhorod.

On Saturday, Poland sent a hospital train to pick up those wounded in the war in Mostyska, in western Ukraine, and bring them to the Polish capital of Warsaw for treatment. The hospital train left the border town of Przemysl with five carriages to transport the wounded and four others stocked with humanitarian aid for Ukraine’s Lviv district.

The U.N. said said most Ukrainians were heading to neighboring Poland, Moldova, Hungary, Romania and Slovakia but some even fled into Belarus — from which some Russian forces entered Ukraine. Some planned to head further on to other countries in Europe.

The border post in Siret was crowded with Ukrainians on Saturday and humanitarian groups set up tents a few miles in and offered food and drink to those arriving.

Despite the welcome, teenager Natalia Murinik’s family didn’t know where they were going next.

"We don’t have a clue. We’re waiting for our friends, and then we’ll think," she said.