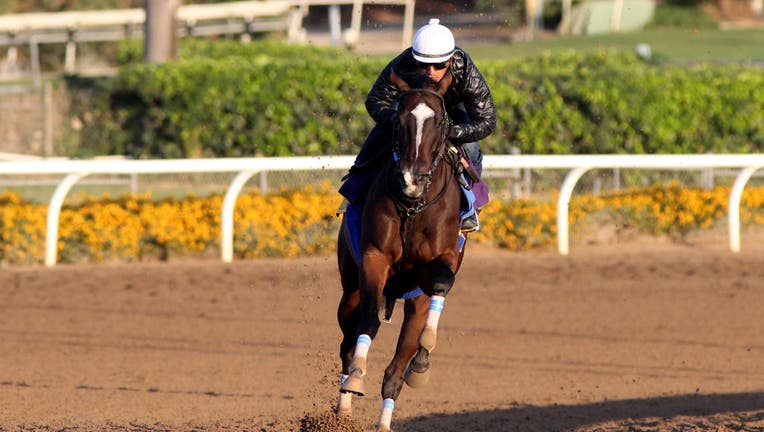 ARCADIA, Calif. - Another racehorse was killed at Santa Anita Park on Sunday, the second horse death there this weekend and the 36th horse to die at the troubled track since Dec. 26.

Bye Bye Beautiful, a 2-year-old filly making just her second career start, suffered a foreleg injury less than a half-mile from the wire in Sunday's third race and was euthanized, according to Steve Andersen of The Daily Racing Form.

Santa Anita officials did not immediately confirm the death, but said the track would issue a "corporate statement" after Sunday's last race, scheduled for 4:15 p.m.

The racetrack's web site notes that Bye Bye Beautiful took a bad step and was injured and vanned off in the third race.

The death was the fourth during Santa Anita Park's fall meet, which began Sept. 27. The 5-year-old gelding Ky. Colonel collapsed and died from an apparent heart attack jogging on the inner training track Oct. 6. Satchel,

Paige, a 3-year-old gelding, was euthanized after breaking his left front ankle during a race Oct. 19. And on Friday, a 6-year-old mare named GQ Covergirl injured her front two legs while running on the training track and was euthanized.

The track -- and the sport in general -- has been under heavy scrutiny since the rash of deaths at Santa Anita started garnering more media attention this year than in seasons past.

The California Horse Racing Board announced Thursday it will issue a report in December on the racing and training fatalities during Santa Anita Park's winter/spring seasons that could provide strategies to avoid similar equine injuries.

Veterinary personal, safety stewards and others involved in track safety have been accumulating and analyzing the information to come to an understanding of how each death occurred in order to identify any common characteristics or causes and develop strategies for preventing similar injuries in the future, according to Mike Marten, the public information officer for the California Horse Racing Board.

Board investigators have issued more than 120 subpoenas for records and are continuing to review all cases for any CHRB rule or criminal violations, Marten said. The Los Angeles County District Attorney's Office has undertaken a parallel investigation.

Statement from PETA:
'It's time for the people responsible for the deaths of race horses to be locked up. Even though all eyes will be focused on Santa Anita racetrack for the Breeders' Cup this weekend, we still have no results from the district attorney or prosecutions for cruelty to animals, and we're missing crucial information about why these horses died. Santa Anita has taken extraordinary measures to protect horses, but it can't criminally investigate trainers and veterinarians for the deaths of Bye Bye Beautiful and the other horses. Law enforcement must do this. PETA again calls on the district attorney's office to release its findings of its investigation into the deaths of the horses immediately and hold those responsible accountable. Further delay puts all the Breeders' Cup horses at even greater risk.'

STATEMENT FROM THE STRONACH GROUP:
'Bye Bye Beautiful was humanely euthanized after the third race on Sunday, October 27th at Santa Anita Park.  After being pulled up past the ½ mile pole, Bye Bye Beautiful was immediately evaluated by a team of on-track veterinarians, led by Santa Anita Park veterinarian Dr. Dana Stead, and transported in the equine ambulance.  Dr. Stead observed that the filly had suffered a right forelimb lateral condylar fracture with medial sesamoid involvement and, because of the severity of the injury, made the decision to humanely euthanize the horse.

As mandated by the California Horse Racing Board, Bye Bye Beautiful will undergo a necropsy at the University of California – Davis’ School of Veterinary Medicine.

Bye Bye Beautiful, a two-year-old filly, was making her second start for owners Grenier, Lawless or Lewkowitz, et al.  She finished fourth in her first start on September 13th at Los Alamitos.  The thoughts of the team at The Stronach Group and Santa Anita go out to everyone who cared for the filly, including trainer J. Eric Kruljac and his staff.'