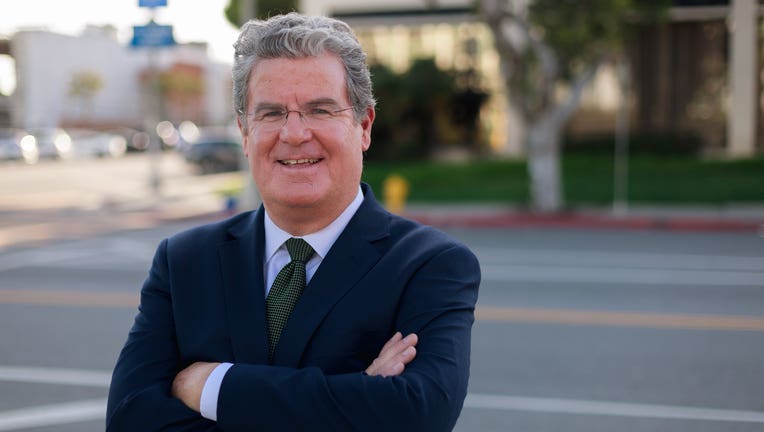 A campaign photo of Tim McOsker, who's been elected the next City Councilman to represent Los Angeles' 15th District. (Photo via TimMcOsker.com)

LOS ANGELES - Tim McOsker, an attorney and a veteran of City Hall as a former advisor to Mayor James Hahn, is set to return to Spring Street representing the Los Angeles City Council's 15th District after declaring victory Tuesday.

McOsker will replace Councilman Joe Buscaino, who has represented the district since 2012 but did not seek a third term after an unsuccessful mayoral bid.

As of Tuesday, McOsker had garnered nearly two-thirds of the vote in the race against community activist and entrepreneur Danielle Sandoval.

In a statement, McOsker said his victory was a "mandate not for me, but for a community that deserves good jobs, better wages, clean air and water, more affordable housing, effective solutions for homelessness, safe neighborhoods, transparency in local government, and a voice in City Hall."

McOsker, who also finished first in the June primary, said he would prioritize quality of life in the district's communities.

"To every constituent of the 15th, whether you supported me or not, I promise you this: I will always be accessible, transparent, and responsive, and I will put every fiber of my being into representing you," McOsker said.

Sandoval has not yet conceded the race, but a spokesperson said she would be issuing a statement later Tuesday.

The 15th District is long, stretching 13 miles from Watts to San Pedro — thinning out around the Harbor Gateway — and includes the Port of Los Angeles.

In an interview with City News Service before the election, McOsker stressed his experience as one of his strengths. Prior to working as the CEO of AltaSea at the Port of Los Angeles and in private practice as an attorney, he was a top deputy to Hahn when Hahn was both city attorney and mayor.

He said he has a "deep understanding of how the government is structured," pointing to experience helping reform the city's charter under Hahn.

"I think it informs me better as to how we can respond to these great needs," McOsker said. "And it gives me the opportunity to be effective as soon as I get into office."

In his private practice, McOsker's clients have included the hotel industry and the rank-and-file police union, according to the Los Angeles Times. He was also a registered lobbyist with the city.

Part of McOsker's jurisdiction will be the Port of Los Angeles, and he is already familiar with Gene Seroka, the port's executive director. At a briefing Tuesday, Seroka called McOsker "well-respected."

"He's worked in city government, private sector law, as well as his work at AltaSea," Seroka said. "He's got a vast amount of experience. If he is in fact going to be the winner, we really look forward to working with him."

McOsker said he will aim to eliminate emissions at the port.

"The challenge in the port is that it's an extremely important economic engine to the world, to the region and to the city," McOsker said. "But we need to continue to put the port in the position where we have sustainable practices, and we're bringing down the emissions and pollution in the air to zero."

McOsker, who was endorsed by Buscaino, said he would focus on improving basic services in the district. The council office's staff will be built around the communities of Wilmington and San Pedro. They will be "from those communities, understand the communities, are respected and known by the community, who will be doing the constituent services on my behalf," McOsker said.

He also said he would be developing programs and initiatives to ensure that certain communities farther from the port that have been overlooked in the district are properly addressed.

McOsker said the three biggest issues facing the district are homelessness, increasing sustainability at the port and public safety.

On homelessness, McOsker stressed focusing on the "entire continuum of care."

McOsker said he was inspired to run because he wanted to give back to the city for all it has given him.

"This is a city and a region that has done so much for my family," McOsker said. "And it is an opportunity to return to public service to make sure that we have a city that works well for our kids and our grandkids."