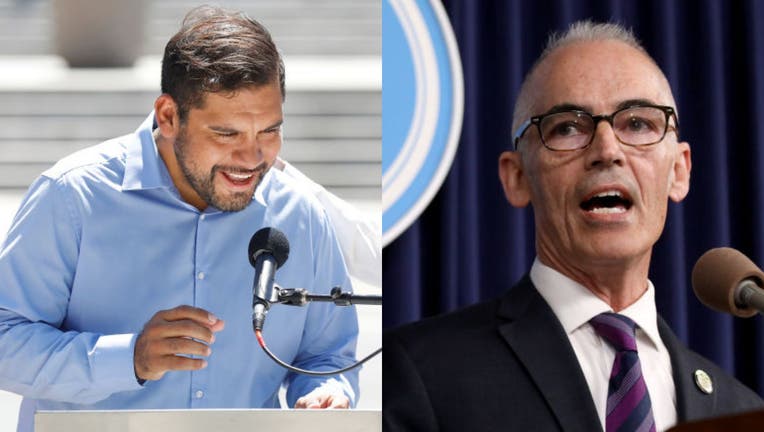 LOS ANGELES - As votes continue to be counted in Los Angeles County, the latest numbers indicate incumbent Mitch O’Farrell is losing in the race to maintain his seat on the LA City Council to challenger Hugo Soto-Martinez.

O'Farrell is seeking a third consecutive term, but Soto-Martinez beat him out in the June primary, winning 41% of the vote compared to O'Farrell's 32%, forcing a runoff.

Soto-Martinez, in an interview with City News Service, said he believes he is running as the more progressive candidate in a diverse district that has the highest number of rental and multi-family units in Los Angeles.

He pointed to the cost of housing, the homelessness crisis and public safety as the most important issues facing the district.

On housing, Soto-Martinez proposed pushing the city to take over underutilized or vacant buildings such as St. Vincent's Hospital to be refurbished as interim housing.

"Rather than waiting for the housing to be built, we can use the space that we have now and have a more immediate effect," Soto-Martinez said.

O'Farrell's campaign acknowledged but did not coordinate an interview request.

During a candidate forum with Spectrum News in October, O'Farrell said that his office has placed 1,000 people experiencing homelessness in his district into housing and reduced homelessness in Hollywood by 57% over the last two years.

"We have a program that is working that could be an example for the rest of the city, and exactly no one has been criminalized or swept," O'Farrell said. "We house people and we put them on a path to wellness."

Soto-Martinez joined those critical of O'Farrell over the March 2021 closure of Echo Park for repairs, which resulted in the removal of hundreds of people experiencing homelessness who had taken up residence in the park during the COVID-19 pandemic.

The removal effort was met with large protests, in which hundreds of officers descended on Echo Park and arrested about 180 people, including journalists. Protesters blasted the city for forcing the park's residents out of an area that had grown into what they called a supportive community during the pandemic — including a vegetable garden, working showers and a shared kitchen.

RELATED: Of the 183 people removed from encampments in Echo Park Lake only 17 are in long-term housing, report says

A report published in March by the UCLA Luskin Institute on Inequality and Democracy found that only 17 out of 183 unhoused people who left the park were placed in long-term housing.

O'Farrell said in a response to the report that the situation at Echo Park was "not safe for anyone," refuting claims of a "police invasion."

"What actually happened was a three-month outreach process that led to a warm handoff to LAHSA and transitional housing placements for nearly 200 people who had been living in a dangerous, deadly environment," O'Farrell said.

Soto-Martinez claimed that encampments at Echo Park increased under O'Farrell's watch, and said that he would not allow "encampments to grow like they did at Echo Park Lake."