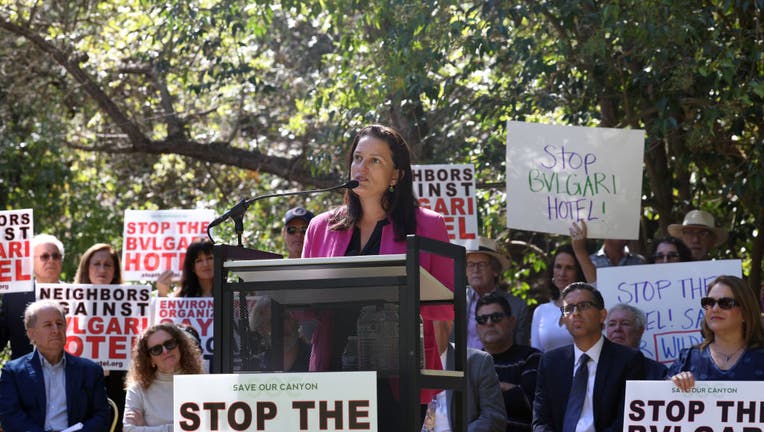 As of Tuesday morning, Yaroslavsky led Yebri by more than 10,000 votes, garnering over 58% of the ballots counted so far from the Nov. 8 election.

In a statement, Yaroslavsky said she was "optimistic that I'll have the privilege of serving" on the council, noting that she was ahead by a "significant and growing margin."

Yaroslavsky was a senior policy adviser for LA County Supervisor Sheila Kuehl, and comes from a family with roots in politics. Her father-in-law, Zev Yaroslavsky, served on the City Council for nearly two decades, and her mother was Kuehl's district director when Kuehl was in the state Assembly.

"I think what we need in local elected office now more than ever is ethical, effective and proven people in these seats of local power," Yaroslavsky said in an interview with City News Service before the election.

Yaroslavsky grew up doing her homework at community meetings.

"A lot of people feel disconnected from government, and that it's something that is inaccessible," she said. "For me growing up, government was my mom and people like my mom, who used their jobs to help fix problems for people and make things easier and better."

Prior to serving as an aide for Kuehl, Yaroslavsky worked as a land use attorney and then as general counsel for a nonprofit focusing on climate change issues.

Yaroslavsky touted her experience working at the county level as a plus. She believes that council members can be "parochial" at times, and said she would entertain citywide approaches on solutions regarding homelessness, public safety and climate change.

Yebri, a small-business owner who has served on various nonprofits, emailed supporters Tuesday morning noting his disappointment in the vote count, but added that "I know we gave it our all." Yebri said he called Yaroslavsky to congratulate her.

"While we sparred during the campaign, Katy and I agree on far more than we disagree," Yebri wrote. "My wife Leah and I are rooting for Katy's success in making the 5th District better and safer for everyone. If Katy succeeds, our neighborhoods will thrive."

Yaroslavsky said Yebri ran a "hard-fought campaign" and thanked his supporters for their engagement and participation.

In the June primary, Yaroslavsky finished just shy of winning the election outright, claiming 49% of the vote. Yebri finished second at 30%. The 5th District runs from the San Diego (405) Freeway to the edge of Koreatown, and contains some of the largest job centers in the city, including UCLA and Cedars-Sinai Medical Center.

Yaroslavsky said some of the major issues facing the district are homelessness, public safety and impacts from climate change.

She supports not having homeless encampments next to schools or daycare centers, but believes the city's 41.18 ordinance would be more effective if it were paired with services and engagement. There aren't enough resources to fully deploy the ordinance, she said.

"Moving people from one corner to another is not how we solve homelessness," Yaroslavksy said, claiming during the campaign that Yebri was overstating the benefits of the ordinance. "I would use 41.18 paired with street engagement and offers of housing and services, which will require us to go out and find places for people to live."

Yaroslavksy doesn't support cutting the police budget, but wouldn't commit to a specific number of officers she would like to see hired. She also was hesitant to support suggestions of expanding the size of the city council.

Yaroslavsky was inspired to run for office when sitting behind Kuehl at a meeting with officials from various cities in which she had done a lot of prep work.

"I remember I was sitting behind Supervisor Kuehl, staffing her," Yaroslavsky said. "And I remember thinking to myself -- it just popped into my head: `I want to be at the table. I helped create this thing, but I'm not at the table.' And it just dawned on me that suddenly it was something that I was interested in, and I hadn't even realized."

She also realized her background in various sectors -- land use, climate work, policy and public health -- could be useful on the city council. And she sees having roughly split her career between the public and private sectors as a benefit.