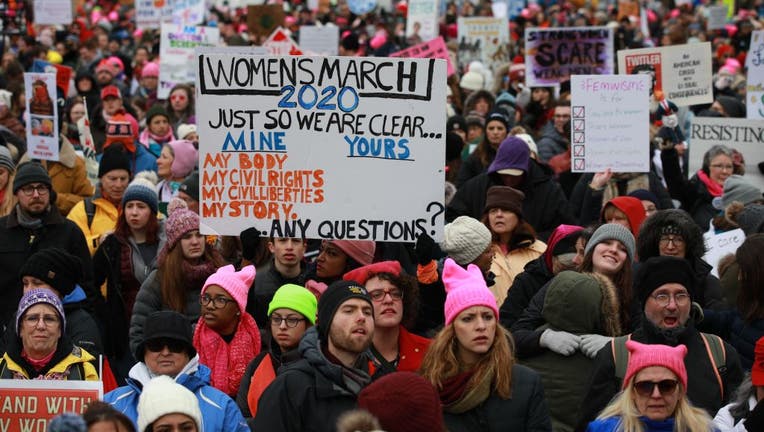 WASHINGTON, USA - JANUARY 18: People participate in the Women's March as they protest against the U.S. President Donald Trump in Washington, United States on January 18, 2020. (Photo by Yasin Ozturk/Anadolu Agency via Getty Images)

LOS ANGELES - Thousands of women nationwide participated in a series of pre-election demonstrations on Saturday.

Thousands of women, and men, turning out to make their voices heard in the short few weeks ahead of the November third election.

A march in downtown Los Angeles focussed on women's reproductive issues, getting out the vote and protesting the Trump Administration's efforts to replace the late Supreme Court Justice Ruth Bader Ginsburg.

“If you are free... free somebody else.”

With passion in their voices... hundreds turned out for the Women’s March and rally in Pershing Square.

“We are here to make sure every single woman is counted in this election.”

“It’s horrible the way he treats women he shows no respect for them and I’m proud to support Joe Biden and Kamala Harris for this election,” said Hollywood resident Chris Wintrode.

“You know what I’m most proud of... all of the RBG collars and everyone that’s here to support a true hero of the women’s liberation movement,” said one person who attended the march.

“Now that’s up for debate really after all these years... I have four daughters and I want better for our children.”

To make their point, a group of protestors dressed in red capes from the hit TV series The Handmaid’s Tale.

“The handmaidens are female slaves forced to bear children against their will and we’re actually there’s a person in the Supreme Court, Amy Coney Barrett who actually wants to put that into place, she’s even against birth control,” said organizer Chantelle Hershberger.

The rally in Pershing Square ended when the protestors took to the streets to march to City Hall. Many say November 3rd can’t come soon enough.

In addition to the Los Angeles march, similar gatherings are scheduled in other parts of the Southland including Pasadena, Long Beach, Torrance and Laguna Niguel.

Today's gatherings are the second under the Women's March banner this year. The earlier marches were held Jan. 18 to commemorate the 2017 event, and renew support for women's rights.