LOS ANGELES - Municipal cleanup crews Monday began a third sweep through homeless encampments in the Sepulveda Basin Wildlife Reserve in the San Fernando Valley, an area that has long been ripe for wildfires and has been the scene of two recent blazes.

The target area of Monday's cleanup was a roughly 13-acre area along Bull Creek next to Lake Balboa, and the cleanup is expected to last three or four days. Officials called the cleanup a public-safety effort, noting that encampments have sprouted in the basin and created a dangerous situation for their inhabitants, as well as visitors to the park and nearby residents.

"Today is part of an extensive cleanup on city of Los Angeles-leased property at the Sepulveda Basin that began in August and will continue until completed," said Councilwoman Nury Martinez, who represents area. "The city has a duty to ensure that park hours are enforced and the Basin remains safe and accessible to all visitors."

Martinez noted that the homeless were given advance warning of the pending cleanup, and outreach by service providers continued as the effort got underway. 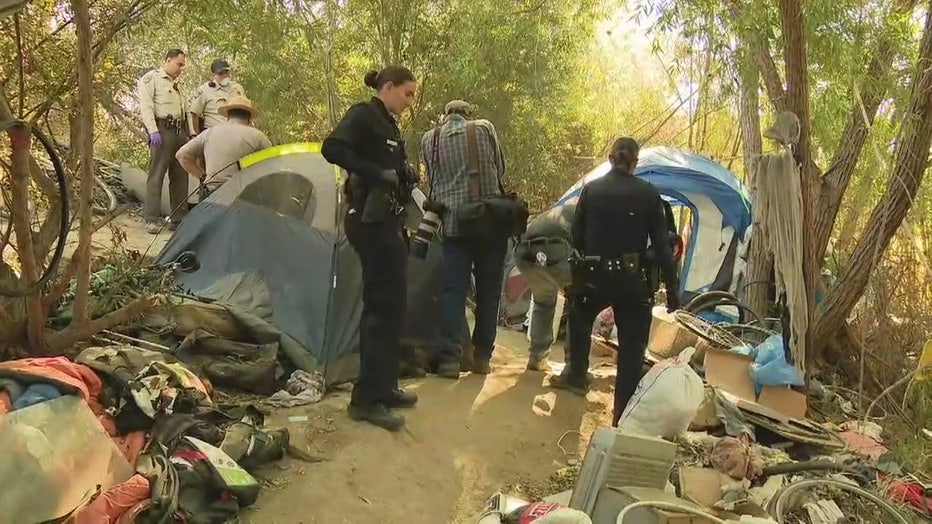 The most recent fire in the area occurred Oct. 24, burning about 60 acres. Another fire burned 10 acres in July, days before the first scheduled cleanup, with some propane tanks spotted in the burn area, increasing the danger for fire crews.

"The recent fires are a reminder that we need to keep this effort going to protect the safety of everyone," Martinez said. "We continue to work with state and federal authorities for their approval to clean other areas of the basin, which are under their jurisdiction."

During the first cleanup in August, the Los Angeles Police Department's Bomb Squad was called in when a grenade was discovered. The second phase took place along five acres in Haskell Creek in September.

Los Angeles Homeless Services Authority and L.A. Family Housing, the Department of Recreation and Parks, park rangers, the Bureau of Sanitation and Environment, CARE and CARE-Plus teams, and the LAPD have been involved with the cleanup and outreach efforts.

The first two Basin cleanups removed more than 391 tons of trash and green waste from the basin, authorities said.

The reserve is owned by the U.S. Army Corps of Engineers, and the city's Department of Recreation and Parks leases a majority of the reserve as park space.

The city is working with the Corps of Engineers and the state's Fish and Wildlife Department to secure approvals to clean a fourth area, 34 acres along Encino Creek. That cleanup will include brush removal and requires permit approvals, which could start as soon as December or early 2020, Martinez said.