TEMECULA, Calif. - The mayor of Temecula resigned following an email in which he stated he didn’t “believe there’s ever been a good person of color killed by a police officer” locally.

Mayor James Stewart had apologized Thursday for the email, saying he never meant to use the word “good.” He had said he is dyslexic and so used voice text to send his late-night Tuesday message but failed to notice the added word.

Stewart said he was replying to someone “concerned about our police officers and their sensitivity training.” 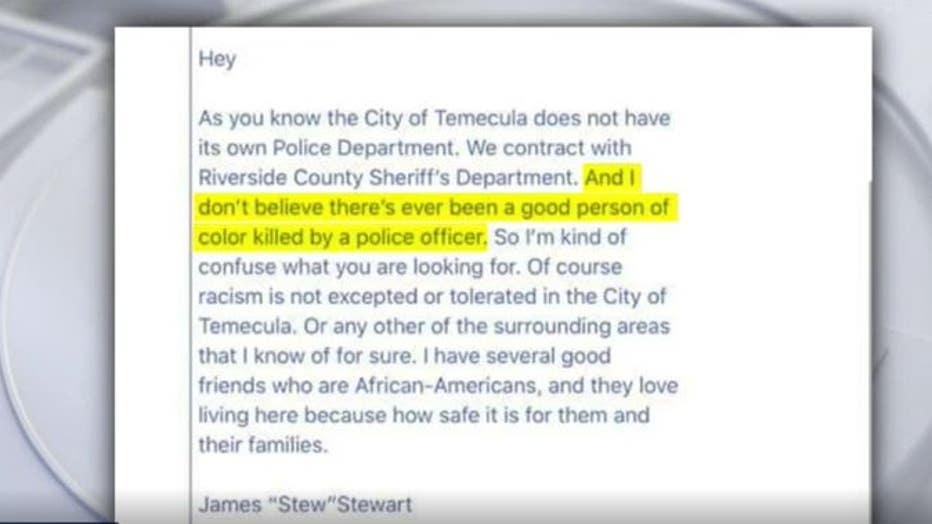 The city issued a press release late Thursday announcing that Stewart, who was elected to a four-year term in 2016, was stepping down from his post and the city council, news outlets reported.

“You have every right to be hurt and offended. My typos and off-the-cuff response to an email on a serious topic added pain at a time where our community, and our country, is suffering,” Stewart said in a statement. “I may not be the best writer and I sometimes misspeak, but I am not racist.”

He said he was resigning because he understood his “sincerest apologies cannot remedy this situation.”

The initial email came as cities around California were the scenes of large demonstrations over the death of George Floyd, a black man who died last week after a white Minneapolis police officer pressed a knee on his neck. Four police officers have been charged in his death.

Temecula, a city of about 115,000 southeast of Los Angeles, was one of the places where protests took place. African Americans represent about 5% of the city’s population while Riverside County is about 7% black, according to U.S. census figures.

However, black people account for nearly 18% of the people who died in law enforcement custody in Riverside County between 2010 and 2018, the Press-Enterprise reported, citing a state Department of Justice database.

Riverside County also was the site of the 1998 death of Tyisha Miller, who was killed by Riverside police as she sat in a car with a pistol in her lap. Family members had called police because she appeared to be unconscious and in need of medical care. Police said she appeared to sit up and grab the gun as they entered the car.

The shooting sparked demonstrations, and four officers were fired.

Stewart said he didn’t remember the shooting when he was composing his email message, which also said that “racism is not excepted or tolerated” in the city or surrounding areas.

“I have several good friends who are African Americans, and they love living here because how safe it is for them and their families,” the email said.