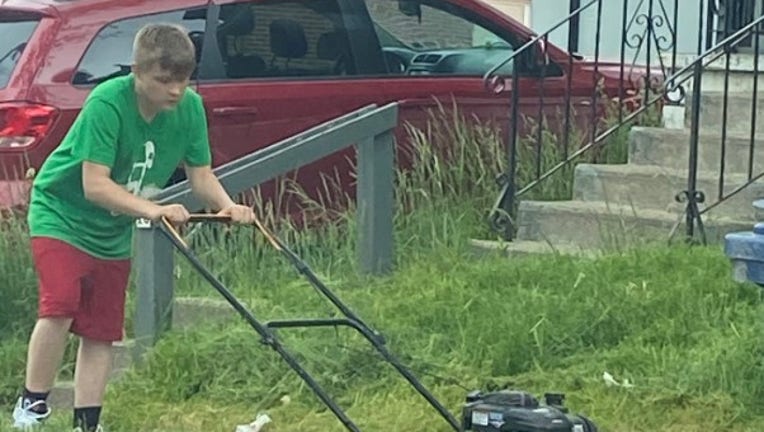 BUFFALO, N.Y. - Frederick Adams used to teach his grandson, Nathan, how to properly maintain a yard. When the 72-year-old died of cancer in February, 14-year-old Nathan used the skill to give back to veterans, like his grandfather who served in the U.S. Army.

"He taught me when I was old enough to push a mower — how to start it and how to make the grass look good," Nathan told FOX Television Stations on Monday.

In May, the teenager started his own business, "The Lawn Kid," after being told he was too young to get hired for a summer job.

He cuts grass for people in his Buffalo, New York neighborhood, but if his client is a veteran, he will give away the first cut for free. Since then, he has cut six yards without charging a fee and has 20 more free yards on his to-do list.

RELATED: Los Angeles surgeon preparing to travel overseas to give the gift of hearing

The teenager said his goal is to help out 50 veterans.

And while Nathan is cutting grass, he keeps his grandfather in mind.

"I think his exact words would be ‘I’m proud of you bud,’" he answered when asked what would his grandfather say about his volunteer work.

His mother said she always tears up when asked about her son.

RELATED: Man journeying a 15K mile road trip to honor daughter he lost to cancer makes a stop in Houston

"He is like a typical teenager, and he will bring us to the brink of insanity," Angel Adams said. "But he has a good heart. He also has ADHD and autism. He’s on the low end of the spectrum, and he doesn’t let that slow him down."

"It makes me so very proud to see him doing something in my dad’s honor," she continued.