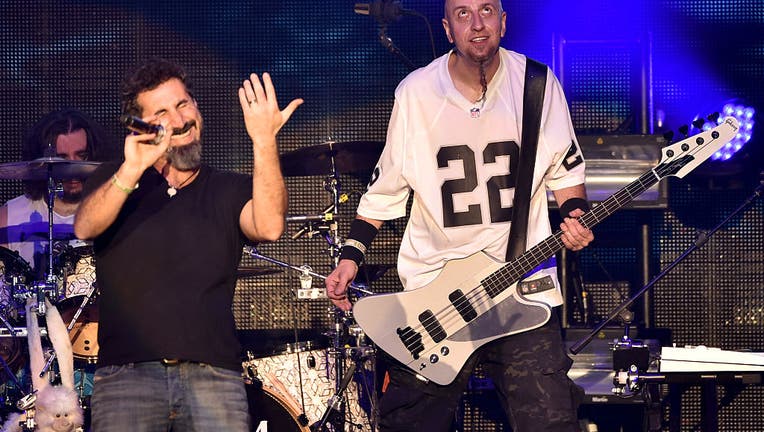 INGLEWOOD, CA - DECEMBER 13: Musicians Serj Tankian and Shavo Odadjian (R) of System of a Down perform onstage during day one of the 25th annual KROQ Almost Acoustic Christmas at The Forum on December 13, 2014 in Inglewood, California. (Photo by Kevi

LOS ANGELES - Glendale's own System of a Down announced it is postponing this weekend's highly-anticipated show. The band's announcement on Thursday comes just hours before they were scheduled to take the stage with Korn, Helmet and Russian Circles at Banc of California Stadium.

System of a Down's frontman Serj Tankian announced on social media that he had tested positive for COVID-19. Tankian, 54, said on social media he's not only fully vaccinated against the virus, but he insists he had been "incredibly careful" over the course of the pandemic.

The shows – originally scheduled for Friday, October 22 and Saturday, October 23 – have been pushed back to February 4 and 5.

Months before the band was originally set to perform in Los Angeles, FOX 11 previously featured Tankian's other passion: painting. Good Day LA anchor Araksya Karapetyan spoke with Tankian back in July to hear more about the band's frontman's art exhibit.

SUGGESTED: System of a Down releases new music for first time in 15 years to benefit Armenia