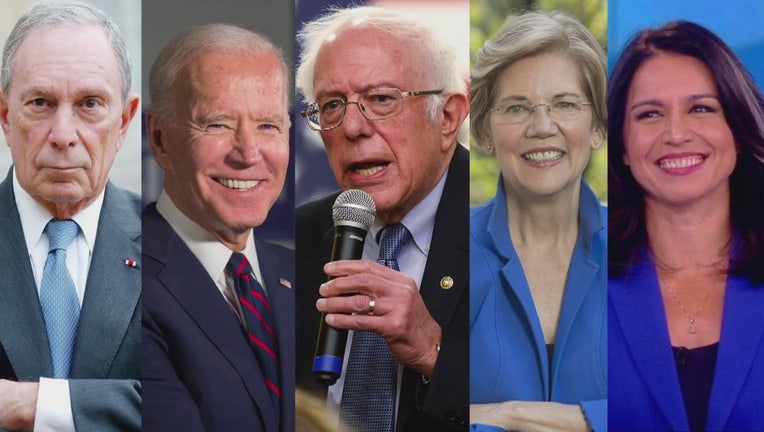 LOS ANGELES - With the number of Democratic presidential candidates shrinking, Southland voters will join their counterparts across California and in 13 other states in Super Tuesday primaries that could further narrow the field and shed light on who will challenge President Donald Trump in November.

Two of the top candidates remaining in the race for the Democratic presidential nomination -- Vermont Sen. Bernie Sanders and Massachusetts Sen. Elizabeth Warren -- held spirited rallies in the Los Angeles area over the past two days, while former Vice President Joe Biden is scheduled to hold a rally in Baldwin Hills late Tuesday afternoon. Biden is also scheduled to hold a fundraiser Wednesday at the Los Angeles-area home of former Paramount Pictures CEO Sherry Lansing.

Biden also has some high-profile support in the Southland. Los Angeles Mayor Eric Garcetti is a co-chair of Biden's national campaign and is expected to appear with the former vice president at Tuesday's rally in Baldwin Hills. Los Angeles' two other citywide elected officials -- Controller Ron Galperin and City Attorney Mike Feuer -- are also backing Biden.

FOX 11's Bob DeCastro was at a polling place in Koreatown on Super Tuesday as the polls opened across The Golden State.

Recent polling, however, has shown Sanders with a strong lead across California, with Warren and Biden in a virtual tie for a distant second-place finish, and former New York City Mayor Mike Bloomberg close behind. That polling preceded the departures of Buttigieg and Klobuchar, but it's unclear if their exit from the race and endorsement of Biden will boost his fortunes.

It also remained unclear, even with the recent narrowing of the field, if more than one or two candidates will be able to reach the 15% threshhold of the vote required in individual congressional districts to earn any of the state's formidable 415 delegates.

If the polling proves accurate about Sanders' popularity among California voters, the 15% requirement could give the Vermont senator the upper hand in earning a majority of the state's delegates. 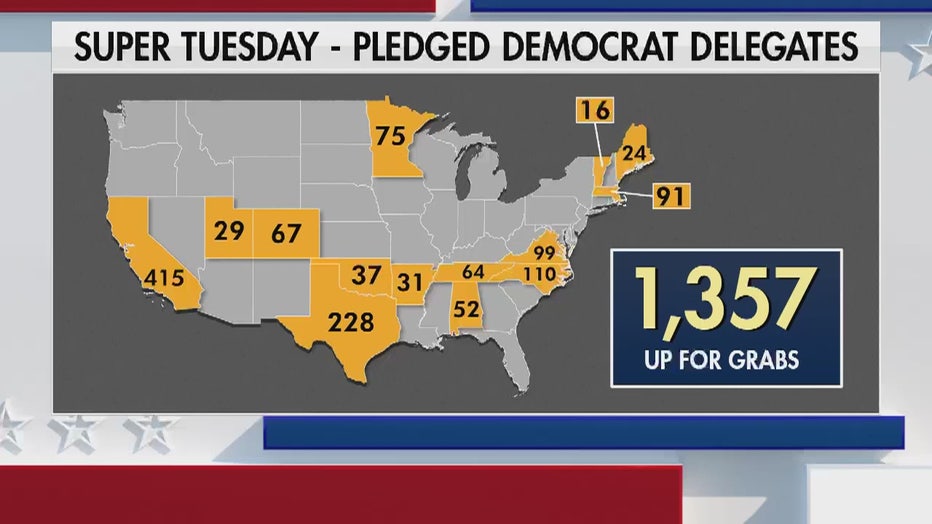 Further muddying the waters is the number of Californians who voted early -- more than 3 million as of Sunday -- and may have cast votes for candidates no longer in the race.

In Los Angeles County, nearly 575,000 vote-by-mail ballots had already been received as of Monday night, according to Registrar-Recorder/County Clerk Dean Logan. He said more than 100,000 ballots were cast at the county's various Vote Centers on Monday alone, bringing that total to roughly a quarter-million people who had already cast in-person ballots.

Logan and the Secretary of State's Office stressed on their social media accounts Monday that there is no "do-over" for people who cast early ballots for candidates who have since dropped out of the race.

Since vote-by-mail ballots are accepted up to three days after the election -- as long as they are postmarked by election day -- final results from Tuesday's vote may not be known for weeks, potentially leaving the exact division of the state's presidential delegates in limbo until early April.

Democratic Gov. Gavin Newsom has not endorsed a candidate in the primary, although his wife is backing Warren and spoke at her rally Monday night at East Los Angeles College. Newsom was an early backer of his longtime political ally Sen. Kamala Harris, but she suspended her campaign in December.

"Joe Biden is a leader who can unify and heal our country at this unique moment in history. From delivering on the Affordable Care Act and Recovery and Reinvestment Act to helping negotiate the Paris Climate Accords -- Joe Biden has delivered for working families across California and the country. While in Congress, I saw firsthand his unique ability to bring people together to solve problems. That's why I know Joe will bring level headedness, decency, stability and common sense back to our government," she said.