The view from the ground and the cockpit as pilots prepare for Super Bowl Sunday's heritage flyover. Video courtesy Dept. of Defense, via DVIDS.

INGLEWOOD, Calif. - The Super Bowl flyover requires plenty precision, so pilots have been practicing this week ahead of Sunday’s big game.

Video footage from the Air Force gives a glimpse of what the flyover will look like, along with a rare look from the pilots’ perspective.

The practice run took place in the airspace over Inglewood, California, on February 9.

The Cincinnati Bengals will take on the L.A. Rams for the Super Bowl LVI title at SoFi Stadium on Sunday. 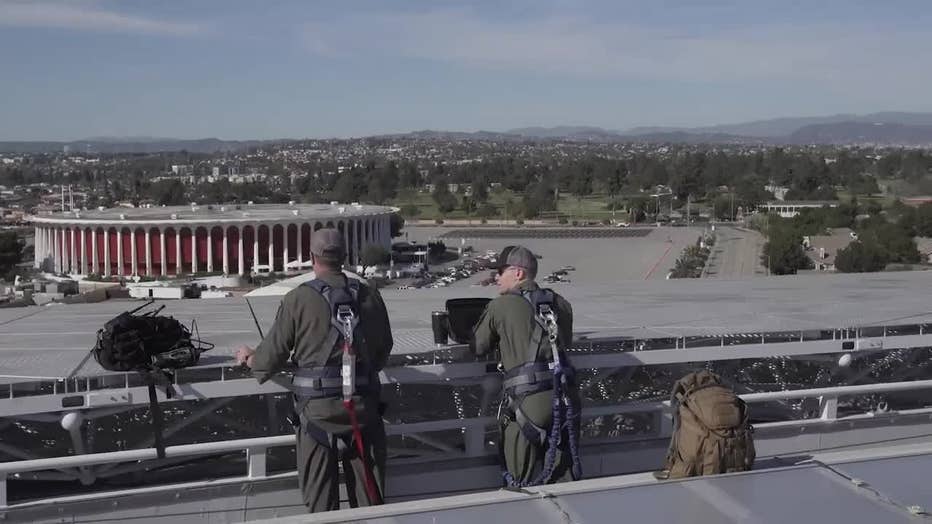 Observers on the roof of SoFi Stadium help rehearse the precise timing needed for the Super Bowl flyover. (Dept. of Defense image)

In honor of the U.S. Air Force’s 75th anniversary, the NFL has enlisted the Air Force Heritage Flight Foundation to carry out this year’s flyover. The non-profit was founded in December 2010 "with the primary charitable mission of providing Heritage Flights to the public."

Five historic aircraft will participate in this year’s event: A P-51 Mustang, an A-10C Thunderbolt II, an F-16 Fighting Falcon, an F-22 Raptor, and a F-35A Lightning II.