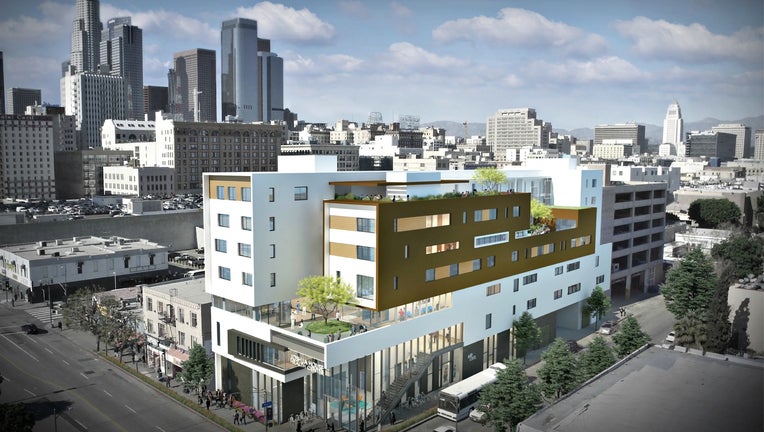 The project, called "649 Lofts,'' located at 649 Wall St., has 54 studio units between 385 and 400 square feet. It began admitting residents in March and is the second of three Skid Row Housing Trust projects expected to open in 2021.

The building includes a three-story community health clinic, called the Joshua House Health Center, which is operated by the L.A. Christian Health Centers. The clinic is scheduled to open later this year and will provide medical, dental, optometry, mental health and social services to an anticipated 7,000 people in the Skid Row community each year.

"It's really important that the patient, when they come, they know that we did this for them, that they feel loved, that they are treated with respect and dignity in a state-of-the-art facility,'' Los Angeles Christian Health Centers Chief Operations Officer and Deputy Director Bettina Lewis said.

RELATED: New supportive housing community for the homeless opens up in the heart of Skid Row

"This project brings housing and health care to the heart of Skid Row, both of which are desperately needed for those who are experiencing homelessness,'' said Sierra Atilano, chief real estate and investment officer for the Skid Row Housing Trust.

Garcetti thanked the Skid Row Housing Trust and L.A. Christian Health Centers and praised the opening of the facility, saying the project is bringing "housing health and hope to Los Angeles and to Angelenos for generations to come.''

Los Angeles County Supervisor Holly J. Mitchell said, "We know that a `housing first' approach works ... the high rate of people staying housed is possible because we know what works and housing works. A space to heal leads to success.''

RELATED: $2B development planned for 7.6-acre site in Skid Row

The opening comes as the city and county is facing a federal order to provide shelter to all indigent person in the Skid Row area within the next six months.

U.S. District Judge David O. Carter's mandatory order on April 20 also set a timetable for offers of shelter to be made to about 2,000 homeless people living on the streets of Skid Row during the next 120 days.

The city and county of Los Angeles on Wednesday filed an emergency request to place a hold on Carter's order.

Attorney Skip Miller, who represents the county, said Wednesday that the judge's mandate "not only violates the separation of constitutional powers, it will not solve homelessness in the region and instead lead to criminalizing it, undermining the trust and faith the county has worked long and hard to establish with people living in the streets.''

The sprawling 50-block area just blocks from Staples Center contains one of the largest populations of indigent people in the nation. Carter wrote in his order that Skid Row was a decades-old byproduct of systemic racism that left Black people -- especially Black women -- "effectively abandoned on the streets. Such governmental inertia has affected not only Black Angelenos, not only homeless Angelenos, but all Angelenos -- of every race, gender identity and social class.''

Carter's action stems from a lawsuit filed last year by the L.A. Alliance for Human Rights, a group of downtown business owners and homeless residents, which sued the city and county to try and force a resolution to the increasing numbers of people living on the streets.