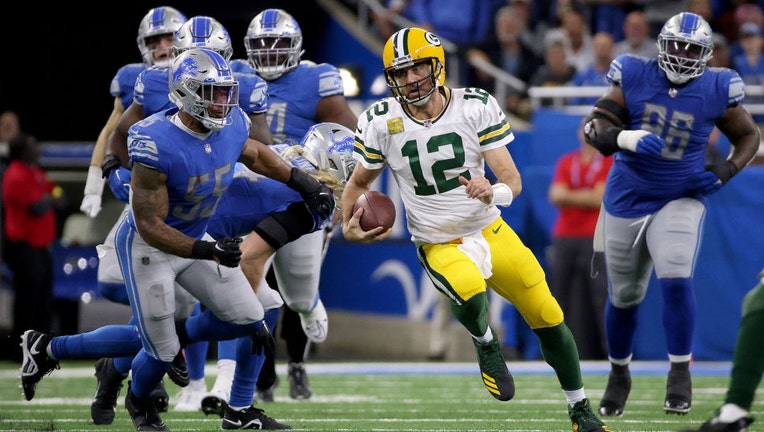 Aaron Rodgers #12 of the Green Bay Packers runs with the ball in the fourth quarter of a game against the Detroit Lions at Ford Field on November 06, 2022 in Detroit, Michigan. (Photo by Mike Mulholland/Getty Images)

Halfway through the 2022 season it appears NFL defenses have finally started catching up.

After a five-year run of hot-shot quarterbacks lighting up scoreboards and leaving defenses with few answers, the pendulum has turned away from the offense for a change.

With star quarterbacks like Aaron Rodgers, Tom Brady and Russell Wilson showing signs of decline as they age, a new crop led by five first-round draft picks in 2021 has been slow to develop. And defenses geared toward limiting big plays in the passing game have put offensive production in a significant decline at the halfway mark.

While rushing production is at its highest mark since 1987 thanks to defenses willing to cede yards on the ground, passing has been harder than it's been in years, with the NFL passer rating of 89.2 the lowest through nine weeks since 2017 and the 6.12 yards per drop back the lowest since 2006.

The decline in passing production has led to 33 games already when the winning team scored 20 or fewer points, tied for the most through nine weeks since 2007. There have also been only nine games this season when the losing team scored at least 30, down from 21 at this point in 2020.

The lack of offense has helped keep games close, with the NFL having a record 72 games decided by seven points or fewer — the most ever through nine weeks. The average point differential per game of 9.4 points is the lowest through nine weeks in the Super Bowl era.

The passing slowdown hasn't made it to Miami, where new receiver Tyreek Hill is thriving under first-year coach Mike McDaniel and is on a record-setting pace.

Hill has 1,104 yards receiving, the most for a player through nine games since Charley Hennigan had 1,122 for the Houston Oilers of the old AFL in 1961. The last NFL player with more was Raymond Berry with 1,147 for the Colts in 1960.

Dolphins teammate Jaylen Waddle has 812 yards receiving, and their 1,916 yards combined are the most for a duo in the Super Bowl era.

It's been rare in the eight-division format starting in 2002 for an entire division to be full of winners or losers.
Through nine weeks this season, the NFL has one of each.

All four teams in the AFC East have a winning record through nine weeks, marking the fifth time that's happened since 2002. It happened in both the AFC North and AFC West last season, as well as the 2014 AFC North and 2008 NFC East.

The NFC East has three winners, with Washington bringing up the rear at 4-5. But the .727 combined win percentage for the division is the highest through nine weeks since 2002.

The NFC South is at the other end of the spectrum, with no teams with winning records. The only other times that happened through nine weeks since 2002 were in the 2020 NFC East and 2015 AFC South.

The Eagles became the 29th team in the Super Bowl era to win their first eight games of the season as they try to join the 1972 Dolphins as the only squads with a perfect season.

Seven other 8-0 teams went to the Super Bowl and lost. The 49ers were the last to do that in 2019, along with the only undefeated regular-season team since '72 in the 2007 Patriots.

While all 28 made the playoffs, 10 of those teams didn't win a single game in the postseason, with the 2020 Steelers the last to go out in their playoff opener.

No team has been worse at protecting big leads than the Las Vegas Raiders.

For the third time this season they lost a game they led by at least 17 points as they blew a 20-0 lead to Arizona in Week 2, a 17-0 advantage over Kansas City in Week 5 and a 17-0 lead over Jacksonville on Sunday.

Las Vegas joined the 2020 Chargers and 2003 Falcons as the only teams to lose three games in a season after leading by at least 17.