LAS VEGAS (AP) - Bernie Sanders scored a resounding victory in Nevada’s presidential caucuses on Saturday, cementing his status as the Democrats' national front-runner amid escalating tensions over whether he’s too liberal to defeat President Donald Trump.

The 78-year-old Vermont senator successfully rallied his fiercely loyal base and tapped into support from Nevada’s large Latino community as the Democratic contest moved for the first time into a state with a significant minority population.

The win built on Sanders’ win earlier this month in the New Hampshire primary. He essentially tied for first place in the Iowa caucuses with Pete Buttigieg, the former mayor of South Bend, Indiana, who has sought to position himself as an ideological counter to Sanders’ unabashed progressive politics, but was fighting for a distant second place in Nevada. 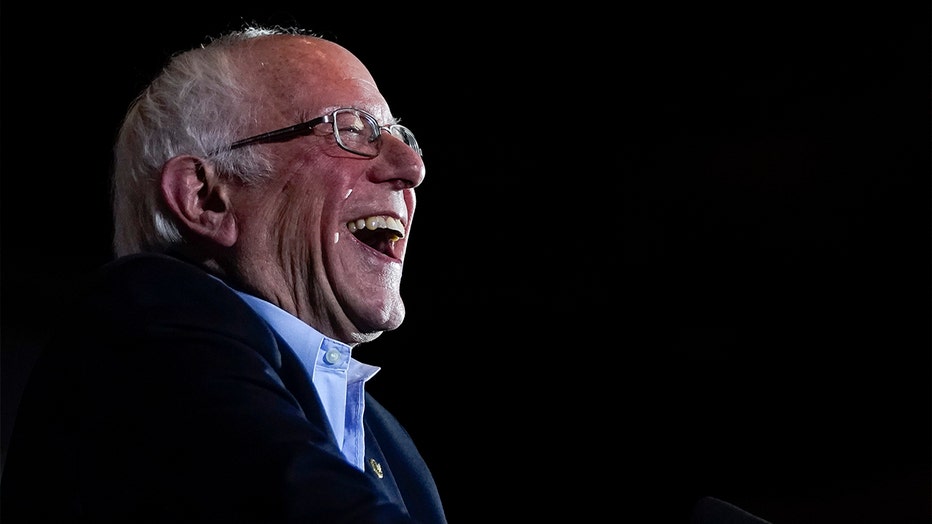 The victory, while encouraging for Sanders supporters, only deepens concern among establishment-minded Democratic leaders who fear that the self-described democratic socialist is too extreme to defeat Trump. Sanders for decades has been calling for transformative policies to address inequities in politics and the economy, none bigger than his signature “Medicare for All” health care plan that would replace the private insurance system with a government-run universal system.

RELATED: Nevada caucus: Minority support, the union vote and the ‘X-factor’ — Here’s what to watch

Despite establishment anxiety, moderates are struggling to unify behind a single candidate, and the vote on Saturday was again split between several centrists, including Buttigieg and former Vice President Joe Biden.

Also in the mix: Massachusetts Sen. Elizabeth Warren, who desperately needed a spark to revive her stalled bid; billionaire Tom Steyer, who spent more than $12 million on Nevada television, and Minnesota Sen. Amy Klobuchar, who hoped to prove her strong New Hampshire finish was no fluke. 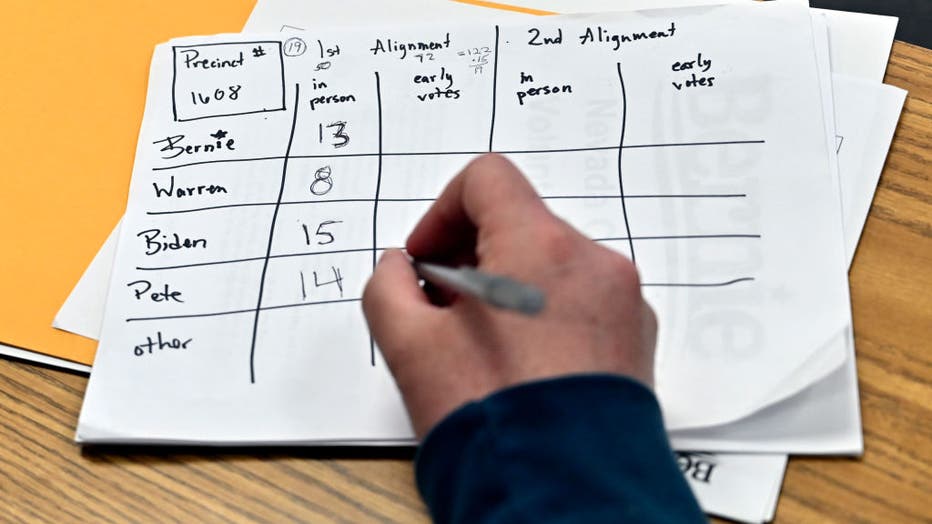 An observer takes notes after the first round of counting of ballots at a Nevada Democratic caucus at Coronado High School on Feb. 22, 2020 in Henderson, Nevada. (Photo by David Becker/Getty Images)

After the chaos of Iowa's caucuses, there were concerns about Nevada's similar setup. But no major problems were in sight.

At noon, under sunny skies, dozens of uniformed housekeepers and casino workers cast ballots in the Bellagio, one of seven casino-resorts on the Las Vegas Strip among 200 locations statewide that hosted caucuses. Nevada is the third contest on a 2020 election calendar marked by chaos and uncertainty after the opening votes in Iowa and New Hampshire, overwhelmingly white, rural states.

The first presidential contest in the West is testing the candidates' strength with black and Latino voters for the first time in 2020. Nevada’s population aligns more with the U.S. as a whole, compared with Iowa and New Hampshire: 29% Latino, 10% black and 9% Asian American and Pacific Islander.

Self-described democratic socialist Bernie Sanders has emerged as the front-runner in the race so far as a half-dozen more-moderate candidates criticize one another. Each wants to be the preferred alternative to the Vermont senator in the race to take on President Donald Trump in November.

In a show of confidence, Sanders left Nevada early to rally supporters in Texas, which offers one of the biggest delegate troves in just 10 days on Super Tuesday. The progressive senator told cheering supporters in El Paso that Trump is “a pathological liar running a corrupt administration.”

“When we come together there is nothing we can’t accomplish,” Sanders declared.

The Nevada verdict represents the third in a primary season that will span all 50 states and several U.S. territories, ending only at the party’s national convention in July. But with two more rounds of voting scheduled over the next 10 days -- including Super Tuesday’s massive delegate haul -- the party may identify a consensus candidate long before the convention.

Sanders and his allies were increasingly confident about his strength in the race. In Nevada, he has strong support from Latinos and rank-and-file union workers who have warmed to his calls to transform the nation's economy and political system to help the working class.

There was skepticism about Pete Buttigieg's ability to win over a more diverse set of voters after strong finishes in Iowa and New Hampshire. Joe Biden, who struggled in those early states, looked to Nevada's voters of color to prove he still has a viable path to the nomination.

Elizabeth Warren and Klobuchar were fighting for momentum, hoping to benefit from a sudden surge of outside money from newly created super PACs.

Klobuchar, campaigning in her home state of Minnesota Saturday night, claimed Nevada success no matter what. “As usual I think we have exceeded expectations.”

New York billionaire Mike Bloomberg, who dominated the political conversation this week after a poor debate-stage debut, wasn't on the ballot. He's betting everything on a series of delegate-rich states that begin voting next month.

Billionaire Tom Steyer spent more than $12 million of his own money on television advertising in Nevada, according to data obtained by The Associated Press.

Trump weighed in on social media, continuing his weeks-long push to sow discord between Sanders and his Democratic rivals.

“Looks like Crazy Bernie is doing well in the Great State of Nevada. Biden & the rest look weak,” Trump tweeted. “Congratulations Bernie, & don’t let them take it away from you!”

The stakes were high for Nevada Democrats to avoid a repeat of the chaos in Iowa, and it appeared Saturday’s caucuses were largely successful.

The developer the Nevada Democrats had planned to use had its mobile app fail spectacularly in Iowa. Nearly three weeks later, Iowa Democratic officials have yet to post final results. But resources poured into Nevada, as Democrats realized they could ill afford another poorly executed election.

Unlike state primaries and the November election, which are run by government officials, caucuses are overseen by state parties.

Nevada Democrats sought to minimize problems by creating multiple redundancies in their reporting system, relying on results called in by phone, a paper worksheet filled out by caucus organizers, a photo of that worksheet sent in by text message and electronic results captured with a Google form. They relied on trusted commercial tech that appeared to smooth the process.

In addition, it appeared Nevada Democrats were able to successfully navigate a complicated process for adding early voting to the caucus process. Nearly 75,000 people cast early ballots over a four-day period, and the party was able to process those in time for Saturday so they could be integrated into the in-person vot.

At the Bellagio caucus site, 41-year-old Christian Nielsen, a scuba diver for the Cirque du Soleil show “O,” saidhe backed Sanders because he believes the country needs a “major change in the White House.”

“We need somebody in the White House who has been on the right side of history for their entire career, somebody who stands with the working class, and will make things more fair for everybody,” Nielsen said.

The Democrats' 2020 nomination fight shifted beyond Nevada even before the final results were known.

Only Biden, Buttigieg and Steyer were still in the state when news of Sanders’ victory was announced.

Sanders and Klobuchar spent the night in Super Tuesday states. And Warren, who began Saturday in Las Vegas, was to finish the day in Washington state, which hosts its election on March 10 but has already begun offering early voting.