SAN BERNARDINO COUNTY, Calif. - A deputy with the San Bernardino County Sheriff's Department was shot Tuesday while attempting a traffic stop. Shocking video captured the moment more than a dozen shots were fired as the deputy tried to pull over the driver.

A shocking video captures the moment about dozens of shots were fired as a deputy tried to pull a driver over.

According to San Bernardino County Sheriff-Coroner Shannon Dicus, one of his deputies was trying to get the suspect to pull over at around 4:15 p.m. Tuesday near the intersection of Bobbett Drive and Olive Street.

According to police, the deputy was involved in a chase with the suspect, who was driving a white BMW.  During the pursuit the suspect made a turn, exited his vehicle, pulled out a rifle and waited for the deputy to arrive. Once the deputy arrived to the location, the suspect began firing his weapon.

The deputy suffered minor injuries to his face as well as shrapnel hitting him in the arm, according to Dicus.

Deputy shot while trying to pull suspect over in San Bernardino

A deputy injured parts of his face after a shooting in San Bernardino.

The deputy – who is a male in his late 20s and had been with the department for about four years – was alert, coherent and talking when he was at the hospital, Dicus said.

"If this person is willing to shoot at deputies, officers… this person is dangerous to the public," Sgt. Thomas stated during a press conference Wednesday.

A completely burned-down deputy cruiser was found at the scene. Dicus said the torched cruiser was driven by the deputy who was shot, but authorities are still working to determine exactly what caused the vehicle to become engulfed in flames.

A witness from the scene captured a video of the burning deputy cruiser.

Hours after the shooting, officers with San Bernardino's city police department found a white BMW possibly belonging to the suspect at a home on Date Street. While searching the car, officers found the rifle used in the attack.

On Wednesday afternoon, another officer-involved shooting occurred, this time in the Highland area. Two SWAT officers were injured and the suspect, believed to be involved in Tuesday’s shooting, was killed at the scene.

Police believe the person shot and killed in Highland Wednesday could be the suspected wanted in connection to Tuesday's San Bernardino shooting that injured a county deputy.

Officers were surveilling the suspect for hours Wednesday and moved in to apprehend him… at that time an officer-involved shooting occurred.  The two injured officers were taken to the hospital; their condition is not known.

The suspect has not been identified, but police say he is believed to be involved in Tuesday’s deputy ambush. 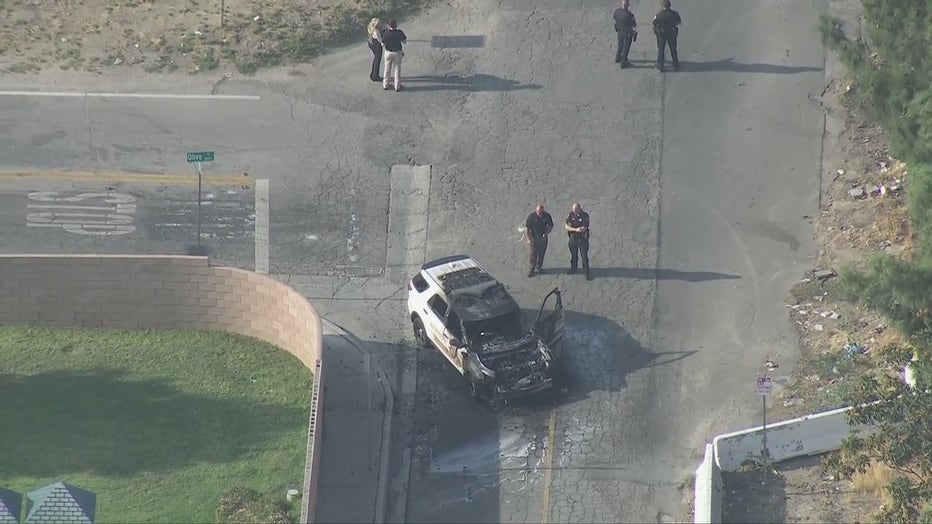