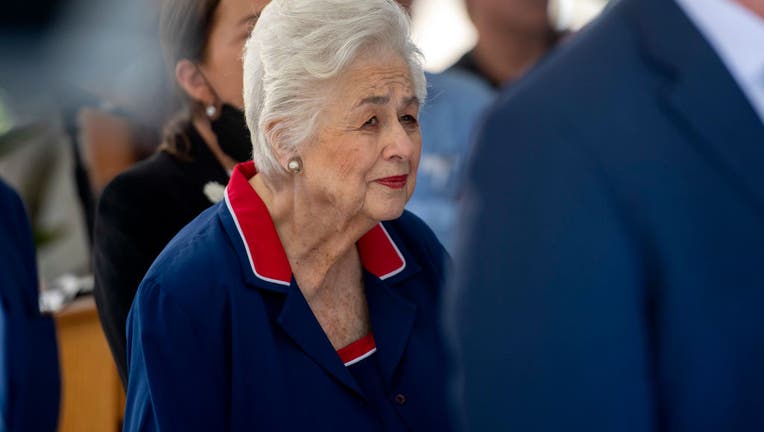 LOS ANGELES - Funeral services were pending Thursday for Rosalind "Roz" Wiener Wyman, who was the youngest person ever elected to the Los Angeles City Council and is credited with playing a key role in luring the Dodgers to Los Angeles from Brooklyn.

"I'm heartbroken at the passing of Roz Wyman, one of my friends and someone who made a real difference for Los Angeles and for Democratic politics," Sen. Dianne Feinstein, D-California, said in a statement. "... Roz was a real force of nature whenever she set her mind to something. Whether it was politics or dragging a baseball team 3,000 miles across the country, Roz had a passion that was infectious and she really got things done."

Wyman died Wednesday at her Los Angeles home at age 92, her family announced in a statement to the Los Angeles Times.

Earlier this month, on Wyman's 92nd birthday, the Los Angeles County Board of Supervisors voted to name the fountain overlook in Grand Park the "Roz Wyman Court." It also agreed to install a plaque at the Music Center to honor her.

In 1953, at 22 years old, Wyman won a seat at the Los Angeles City Council, becoming the youngest person ever elected to serve on the council, and only the second woman.

On the council, Wyman worked to lure the Dodgers to move to Los Angeles from Brooklyn, and the Lakers to move from Minneapolis.

Rosalind "Roz" Wiener Wyman, who was the youngest person ever elected to the Los Angeles City Council and is credited with playing a key role in luring the Dodgers to Los Angeles from Brooklyn, died Thursday at the age of 92.

"If you bleed Dodger blue, you can credit that love to Roz as she helped bring the Dodgers to Los Angeles," Supervisor Hilda Solis said in a statement after the board's Oct. 4 vote. "She was also behind the idea of connecting Los Angeles City Hall up to Grand Avenue through a park where all Angelenos could gather. That idea took 60 years to become a reality, but that is why Roz is a visionary whose dreams changed both this city and county.

"I'm grateful for Roz's friendship, inspired by the legacy she's paved, and honored to move this action forward -- especially on her 92nd birthday. Today we celebrate Roz and her love for Los Angeles."

Wyman was also a strong advocate for the arts, advocating for the construction of the Music Center in the 1960s. She was a member of the National Endowment for the Arts, and served two terms as president of the Los Angeles County Arts Commission and the Los Angeles City Cultural Affairs Commission.

"Roz, then-mayor Dianne Feinstein and I had the privilege of leading the 1984 Democratic National Convention in my hometown of San Francisco as our party nominated the first woman ever for Vice President of the United States.

"Generations of activists and elected officials respected Roz as a godmother of the the Democratic Party because she nurtured young people, mentored candidates and helped elect dozens of women to office," Pelosi said. "She took special pride in electing her dear friend, Dianne Feinstein, to the Senate. Roz had words of advice and wise counsel for everyone, from presidents to precinct workers.  She cared deeply about our Democracy, about women's equality, and about opening parks, arts and public service  to everyone."

Wyman was honored last month at Dodger Stadium, receiving the inaugural Tommy Lasorda I Bleed Dodger Blue Award, recognizing a member of the Los Angeles community that embodies the passion, enthusiasm and love for the Dodgers Lasorda possessed.

The award will annually be presented on or around the anniversary of Lasorda's birth.

"The name Tommy Lasorda is synonymous with the Dodgers, so it's only fitting that we introduce a new award which encompasses his incredible passion for the organization," Dodger President and CEO Stan Kasten said at the time. "For the inaugural award, we have selected Roz Wyman because without her, there might never have been a Los Angeles Dodgers baseball team.

"Her persistent pursuit and dedication to ensuring the team came to Los Angeles embodies the concept of the Tommy Lasorda I Bleed Dodger Blue Award to a tee."

Wyman called being part of Lasorda's legacy "a great honor."

"He was a very dear friend of mine and I'll always remember him for telling me `If it wasn't for Roz Wyman, I would be a shoe salesman,"' said Wyman, who was a season ticket holder at Dodger Stadium since it opened in 1962.

Wyman also has a plaque honoring her at the Los Angeles Memorial Coliseum's Court of Honor. The Dodgers played at the Coliseum from 1958-61. Wyman also persuaded John F. Kennedy to give his acceptance speech for the 1960 Democratic presidential nomination at the Coliseum. In the speech, Kennedy used the term "The New Frontier" for the first time. It would become a label for his administration's domestic and foreign programs.

But Wyman remained a powerful figure in local politics.

Los Angeles City Attorney Mike Feuer said Thursday that Wyman "continued to have a tremendous impact on the political scene here and across the country."

"Roz's house was the go-to place for leaders from throughout the United States when they were trying to generate support for their political campaigns," Feuer said. "... I was very privileged to be Roz's friend, to get her counsel to have her support."