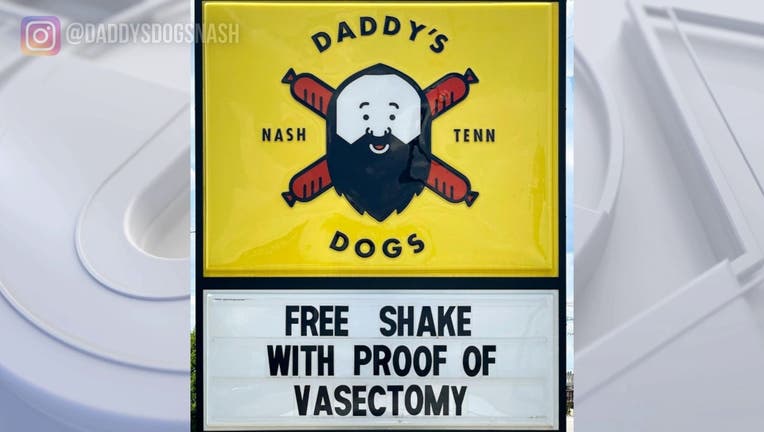 Daddy's Dogs, a popular hot dog spot in Tennessee, introduced its "Snip for Shake Deal," for willing male customers. The special comes just days after the U.S. Supreme Court overturned Roe v. Wade, the landmark decision that had protected a woman's right to get an abortion – by choice – in the U.S. for more than 50 years.

"The world's a pretty crazy place right now, but I have a way to make it just a little bit better," said the restaurant founder Sean Porter, who introduced himself as "Dr. Big Daddy" in a social media video. "There's nothing like an ice-cold milkshake after a vasectomy."

Near the end of the restaurant's video announcement, Daddy's Dogs shared a link to Urology Nashville, a clinic offering a vasectomy to those living in the area.

In Tennessee, where the restaurant is based, a federal court voted this week to allow the state's ban on abortion as early as six weeks into pregnancy to take effect. Meanwhile, in California, Governor Gavin Newsom has pledged to make his state a "sanctuary" for those seeking abortions, even before the overturning of Roe v. Wade.

Across the country, interest in vasectomies have skyrocketed since last week's Supreme Court decision. According to data from Google Trends, the search for the term "vasectomy" jumped on the morning of June 24, the day Roe v. Wade was overturned.