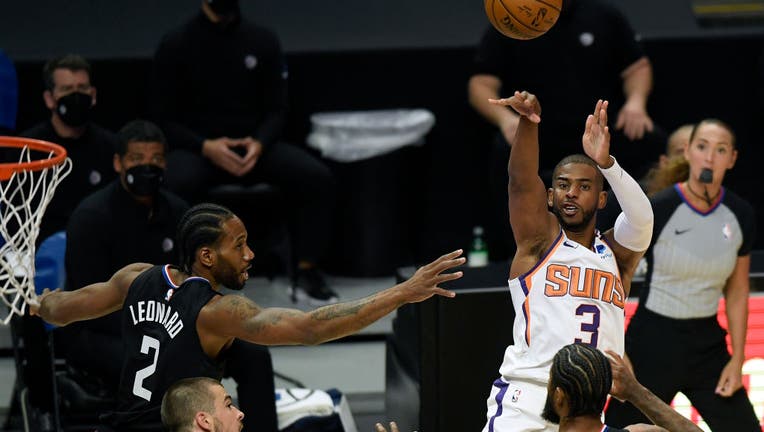 LOS ANGELES - Down 2-0 and without NBA superstar Kawhi Leonard, the Los Angeles Clippers will likely face another obstacle in Game 3 of the Western Conference Finals.

According to Chris Haynes of Yahoo! Sports, Paul plans to return for Game 3 in Los Angeles against the Clippers on Thursday night.

The Clippers are currently playing in their first Western Conference Finals in franchise history, but have been plagued by injuries and fatigue.

Paul entered the NBA's health and safety protocols last week after the Suns swept the Denver Nuggets in the second round of the playoffs.

The Athletic's Shams Charania first reported that Paul would be sidelined for "an indefinite period of time."

The 36-year-old point guard has been vaccinated against COVID-19, said a person with knowledge of the situation, speaking to The Associated Press on condition of anonymity because of privacy concerns. That could mean Paul could be cleared to return more quickly than some who tested positive earlier this season before vaccines were readily available.

In March, the league also relaxed some of the protocols that were put into place last fall, doing so in response to players and coaches choosing to receive the vaccine that protects against the coronavirus.

But the league also cautioned at that time that "if an individual has symptoms consistent with COVID-19, the previous protocols apply" — which would still mean that anyone with those symptoms "may be subject to quarantine" regardless of their vaccination status.

Game 3 is set to take place at Staples Center on Thursday night.