LOS ANGELES - Ralphs and Food 4 Less announced the closure of three underperforming stores in Los Angeles on Wednesday, a decision the parent company says was accelerated by a new Los Angeles City Council mandate that requires a select group of employers to provide an additional $5 per hour in hazard pay for frontline workers.

The following three affected store locations will remain open and operational for the next 60 days, closing on May 15, 2021:

Kroger officials say that Hero Pay to frontline grocery workers will add $20 million in operating costs over the next four months and with narrow profit margins, many underperforming stores will have to close. Many shoppers at Ladera Heights Ralph’s were surprised of the news. Many were upset as they explained that the employees at this store are mostly

Last week, the city council finalized the emergency ordinance, which is required for all non-managerial employees at grocery or drug retail stores with more than 300 employees nationwide, or more than 10 employees on-site, as well as retail stores, such as Walmart and Target, that dedicate 10% of their sales floor to groceries or drug retail. The hazard pay was ordered to be given in addition to employees' base wages for the next 120 days.

"Ralphs and Food 4 Less provide affordable, fresh groceries, good and stable jobs with growth opportunities to thousands of Los Angeles residents, and proudly supports local community organizations across the city. Unfortunately, the Los Angeles City Council disregarded their own Economic Impact Report by not considering that grocery stores – even in a pandemic – operate on razor-thin profit margins in a very competitive landscape. It’s never our desire to close a store, but when you factor in the increased costs of operating during COVID-19, consistent financial losses at these three locations, and an extra pay mandate that will cost nearly $20 million over the next 120 days, it becomes impossible to operate these three stores," said a company spokesperson. 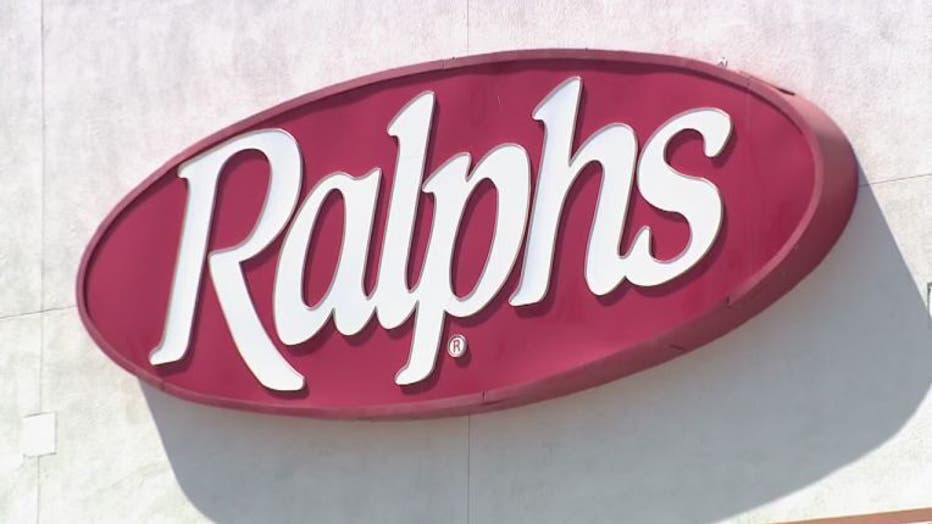 According to Kroger, the average hourly wage for Ralphs and Food 4 Less associates in Los Angeles is $18 an hour and total compensation is $24 an hour, with premium health care and stable pension benefits factored in. The spokesperson added that since the start of the pandemic, Kroger has invested $2.5 billion to both reward associates and implement dozens of safety measures that continue to be implemented, including $1 billion to better secure pensions.

While Kroger did not specify how many employees would be laid off by the stores closing, John Votava, the Director of Corporate Affairs at Ralphs, told FOX 11's Hailey Winslow that they will try to relocate as many employees as possible to other stores in neighboring areas. Votava said the move benefits grocers because the company would not have to re-train employees.

There didn’t seem to be anything "underperforming" in the packed parking lot at the Ladera Heights Ralph’s, one of the stores slated for closure. Shoppers, many of them walking or using the bus, were surprised at the news. Even upset, as they explained that the employees at this store are mostly "old-timers," who have been at this store for many years.

Kroger said it is focusing its efforts on working with state and local governments to prioritize vaccine distribution to frontline workers and its associates.

"While extra pay won’t provide a safer environment for everyone, the vaccine will. To date, nearly 20% of Ralphs and Food 4 Less associates have received their first dose or have been fully vaccinated. The grocers are hosting three vaccine clinics for associates this week in Los Angeles, with additional events to be hosted in the following weeks," the company spokesperson said. "All associates are strongly encouraged to receive the COVID-19 vaccine to help create safer communities, and Ralphs and Food 4 Less are offering a one-time reward of $100 to associates who receive the recommended doses of the COVID-19 vaccine."

Marc Perrone, president of United Food and Commercial Workers International Union, which represents 1.3 million workers in the grocery, meatpacking and other industries, said the company "has made billions in pandemic profits thanks to essential grocery workers in California and across the country. Kroger's action today is a cruel attack on essential workers and threatens the food supply for California communities devastated by the explosion of COVID-19 infections in recent months. Essential workers in grocery stores are putting their health at risk every day to make sure families can put food on the table and city leaders are stepping up to ensure they have the hazard pay they have earned."

The Chief Legislative Analysts for the city of Los Angeles did warn legislators that the extra pay could result in unintended consequences, including store closures, especially in low-income areas where fresh produce is not as easily accessible.

On Feb. 1, Kroger announced that it would close 25% of its Long Beach stores after the city passed a similar ordinance.