LOS ANGELES (CNS) - A puppy that was severely burned by a chemical was turned into a city animal shelter in Lincoln Heights Thursday morning.

A good Samaritan found the 5- or 6-month-old Chihuahua mix somewhere in the 90033 ZIP code, which includes parts of downtown Los Angeles and Boyle Heights, and turned it in about 11:35 p.m. to the North Central Shelter at 3201 Lacy St., Los Angeles Animal Services General Manager Brenda Barnette said.

Other dogs have suffered chemical burns in the Antelope Valley and in September, the county Board of Supervisors approved a $25,000 reward for information leading to whoever harmed the animals.

In Thursday's case, the puppy suffered chemical burns to most of its body and face and is now in a full body wrap, Barnette said.

"We are optimistic because puppies are kind of resilient, but it's a guarded prognosis. There are major burns over his body.

Anyone with information about what happened to the dog was urged to contact the city's Animal Cruelty Task Force, which is made up of personnel from Animal Services and the Los Angeles Police Department, at (213) 486-0450.

Those crimes came to light in August when a golden retriever was brought to a Lancaster animal shelter suffering from severe burns on its neck and back.

The dog, which has since been named Fergus, was brought to the shelter Aug. 11 and subsequently turned over to the Animal Medical Center of Southern California in West Los Angeles.

Doctors said they believe somebody poured battery acid or some other type of corrosive material on the canine.

The Sheriff's Department said at least seven dogs -- Fergus and six pit bulls or pit mixes -- had been found or brought to shelters with chemical burns on their backs since July 20, 2014. At least two had to be euthanized, according to animal control officials.

Sheriff's investigators said there may be additional cases and encouraged the public to immediately report any animals with similar burns.

Authorities in both Kern and Los Angeles counties were investigating the dog injuries, since at least two of the canines brought to the Lancaster shelter apparently came from Rosamond in Kern County.

Barnette said there was no way of knowing if those cases were related to the one in Los Angeles. 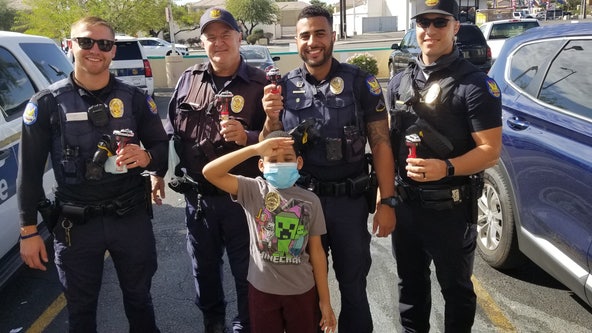