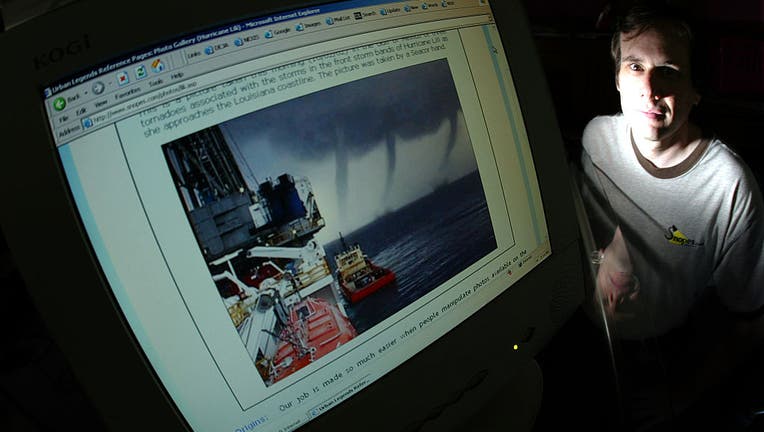 David Mikkelson next to his computer monitor with a doctored storm photo in which two extra tornados were added to the original which had only one. David 44, and Barbara Mikkelson 45, of Agoura Hills run a website called www.snopes.com which is dedic

The co-founder and CEO of the fact-checking site Snopes.com has acknowledged plagiarizing from dozens of articles done by mainstream news outlets over several years, calling the appropriations "serious lapses in judgment."

From 2015 to 2019 — and possibly even earlier — David Mikkelson included material lifted from the Los Angeles Times, The Guardian and others to scoop up web traffic, according to BuzzFeed News, which broke the story Friday.

Mikkelson used his own name, a generic Snopes byline and a pseudonym when he lifted material, including single sentences and whole paragraphs on such subjects as same-sex marriage and the death of David Bowie, without citing the sources, BuzzFeed and Snopes said.

He has been suspended from editorial production pending the conclusion of an internal review but remains CEO and a 50% shareholder in the company, according to a statement from Snopes’ senior leadership.

"Let us be clear: Plagiarism undermines our mission and values, full stop. It has no place in any context within this organization," the statement said.

In a separate statement, eight current Snopes writers also condemned Mikkelson’s actions, while former staffers indicated to BuzzFeed that he routinely encouraged the practice as a way to make Snopes appear faster than it was.

Mikkelson did not immediately return an Associated Press email seeking comment Saturday. He told BuzzFeed his behavior was due to a lack of formal journalism experience.

"I didn’t come from a journalism background," he said. "I wasn’t used to doing news aggregation. A number of times I crossed the line to where it was copyright infringement. I own that."

Created in 1994 under a different name by Mikkelson and his then-wife, Barbara Hamel, Snopes has earned two Webby Awards and served as one of Facebook’s fact-checking partners between December 2016 and February 2019, BuzzFeed News said. In recent years, the site has been the focus of a contentious ownership battle between Mikkelson and the company that bought Hamel’s shares.

BuzzFeed News flagged stories from a range of outlets that also include The New York Times, CNN, NBC News and the BBC. Six were originally published under the Mikkelson pseudonym Jeff Zarronandia, three under Mikkelson’s name and the rest as "Snopes staff." Snopes said it has identified 140 stories with possible problems, including the 54 found to include appropriated material.

Snopes also cited AP material that wasn’t properly attributed. It did not specify which stories.

Senior management said in the statement that Snopes was removing unattributed content while leaving up individual pages. An editor’s note will be used to outline the issues and link to original sources.

"We are in the process of archiving and retracting all of the offending stories, along with disabling any monetization features on those posts," the statement said. "We will attempt to contact each news outlet whose reporting we appropriated to issue an apology."