After a day in Los Angeles that featured a visit to a Metro construction site, an impromptu taco run and a political fundraiser, President Joe Biden traveled to Orange County Friday to discuss his administration's efforts to lower prescription drug and medical costs for American families

ORANGE COUNTY, Calif. - After a day in Los Angeles that featured a visit to a Metro construction site, an impromptu taco run and a political fundraiser, President Joe Biden traveled to Orange County Friday to discuss his administration's efforts to lower prescription drug and medical costs for American families

Biden departed from Santa Monica Airport shortly before 2 p.m. en route to John Wayne Airport. A short time later he spoke to a crowd at Irvine Valley College, highlighting what he called cost-saving measures in the Inflation Reduction Act, including an average $800 annual reduction in health care premiums for 13 million families, along with reduced prescription drug costs for seniors and a cap on out-of-pocket costs for prescriptions.

He also took aim at Republicans for opposing the inflation legislation, and warning they are intent on undoing its provisions if they regain control in Washington.

"Now congressional Republicans are telling us their number one priority is to repeal, if they win back the House and Senate, repeal the Inflation Reduction Act," Biden said. " ... Let's be crystal clear what that means -- if the Republicans in Congress have their way, it's going to mean the power we just gave Medicare to negotiate lower prescription drug prices and other costs over time goes away, gone. The $2,000 cap on prescription drugs goes away, gone. ... Savings from heath care premiums for millions of Americans, gone.

"... Here's the bottom line, so please hear this, when it actually comes time to do something about inflation around the kitchen table, Republicans in Congress are saying no. If Republicans take control, prices are going to go up, as will inflation."

The California Republican Party lashed out at the president's record on inflation, noting it is at nearly a 40-year high, including a 13% rise in the cost of groceries since last year and local gas prices topping $6 per gallon. 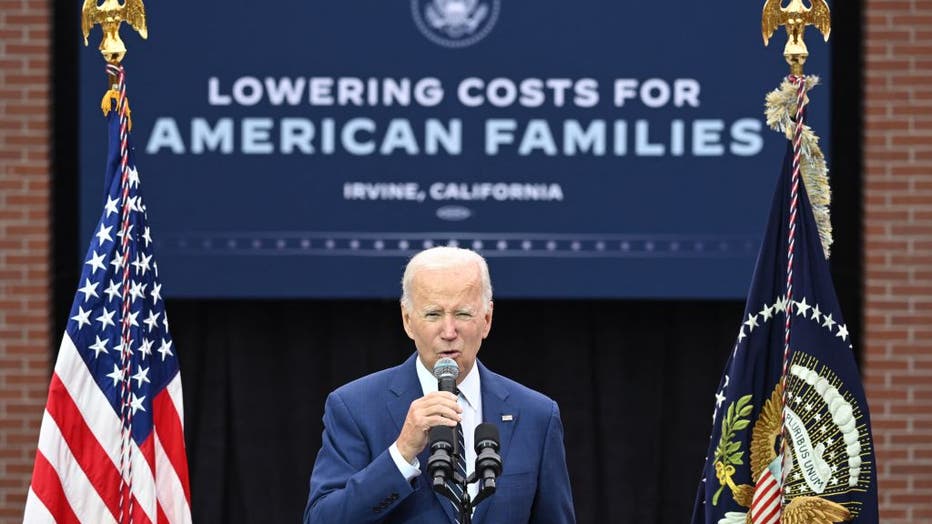 "Californians are struggling thanks to Joe Biden, (Democratic Rep.) Katie Porter and California Democrats' reckless and radical policies," state Republican Party Chair Jessica Millan Patterson said in a statement. "Voters know who's responsible for the strain on their wallets today, and no amount of Southern California photo ops, fundraisers, chicken quesadillas or victory laps will save Democrats at the ballot box this November."

"President Biden is in Orange County today and Republicans may be benefiting more from the visit than Democrats," Balch said in a statement. "Katie Porter and Mike Levin have been working hard to distance themselves from the Biden agenda since his administration has done nothing but make inflation worse and fail on basic issues like safety and security. As long as Biden is near, voters will remember not to vote for the Democrats that support his agenda blindly."

Ahead of the Orange County visit, Biden also signed an executive order directing the Department of Health and Human Services to explore other ways of driving down prescription drug costs. The order directs HHS to submit a report in 90 days for not only reducing drug costs, but also promoting access to "innovative drug therapies" for Medicare recipients, according to the White House.

Following his Irvine appearance, Biden returned to John Wayne Airport for a flight to Portland, Oregon.

On Thursday, Biden toured the construction site of what will be the Metro D (Purple) Line subway terminus near the West Los Angeles VA complex. During the visit, he touted the Bipartisan Infrastructure Law, saying it was making funding available for critical projects locally.

"Every year, people take more than 22 million rides on your subways, your light rail and your buses," Biden told the crowd of dignitaries and workers. "It's how so many people get to work, school and how tourists and locals explore this world-class city. But the transit system needs an upgrade, badly. You know that. You need to connect more neighborhoods, ease traffic congestion, air pollution, make it easier for people to get around to where they need to go.

Biden touted the project as dramatically cutting the time it will take to travel from downtown to West Los Angeles, adding more than 80,000 daily riders to the Metro system while taking 27,000 cars off the roads. He also said it would result in 124,000 fewer tons of carbon dioxide from being released into the air, and would save 14 million gallons of gas.

He pointed to ongoing renovations to the terminal area at Los Angeles International Airport and an eventual rail connection. He also said improvements are being made to improve the movement of cargo in and out of the Los Angeles-Long Beach port complex. 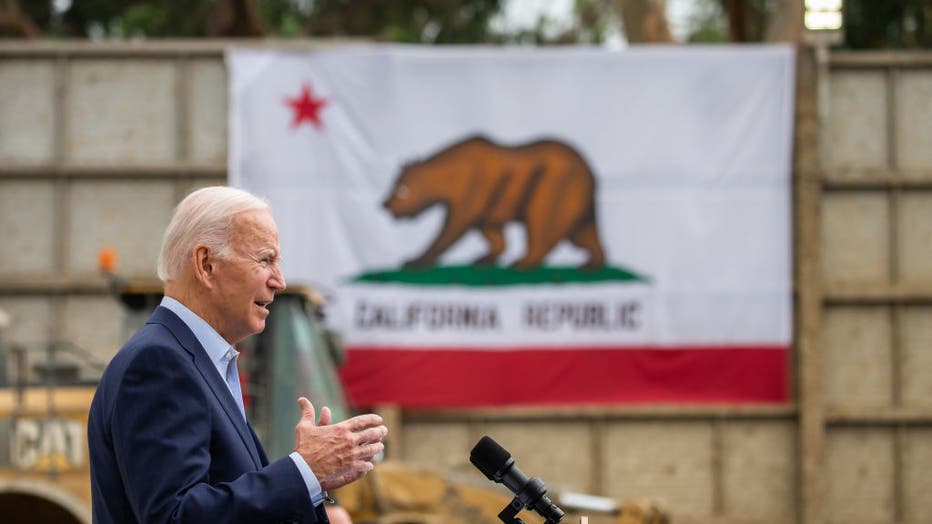 "We're building a new four-lane road to the Port of Los Angeles to make it easier for the trucks to drive up to the container terminal, load up their goods for transport," he said. "And the port of Long Beach, one of the busiest container ports in the nation, we're going to deepen the channel so ships can move in and out of the harbor faster."

Biden also talked about efforts to rebuild bridges and other transportation infrastructure across the state, along with ensuring access to the internet in low-income neighborhoods and bolstering water delivery systems.

"It's been a rough four or five years for the country. ... but there's bright spots where America's reasserting itself," he said. "Like here, where the best workers in the world are hard at work building a better future for all of us. ... We just have to keep it going, and I know we can. I know we can. I've never been more optimistic about America's future, particularly relative to the rest of the world. We're in a better position than any nation in the world, and every other nation that I'm aware of is aware of it.

"... We just have to remember who we are. We are the United States of America, and there's nothing, nothing that's beyond our capacity, nothing, when we decide we're going to do it together."

After his roughly 20-minute speech, Biden shook hands with attendees and posed for photos. Among the other dignitaries on hand were Mayor Eric Garcetti, Sen. Alex Padilla, D-California, and Reps. Ted Lieu, Brad Sherman, Maxine Waters and Nanette Barragan.

Also in attendance was Rep. Karen Bass, D-Los Angeles, and a mayoral candidate -- who Biden has endorsed in next month's runoff election against businessman Rick Caruso, who is also a Democrat.

Biden referred to her as the "soon-to-be" mayor as he began his remarks.

After greeting some attendees, Biden got back into his motorcade for the trip back to his hotel in Westwood, but the caravan made an unannounced stop at Mexican restaurant called Tacos 1986 on Kinross Avenue.

Biden interacted with workers and said he was placing a "takeout order for Bass." When he took out cash to pay for the food he ordered, a worker told him he would get a 50% "public service" discount. Biden gave the cashier $60 and told him to give the next customer a free meal. Biden's food bill was $16.45 -- covering two quesadillas and six tacos.

The last time Biden was in Los Angeles in June, he was serving as a host of the Summit of the Americas. He also spoke at two Democratic National Committee fundraisers during that visit.