The bite that changed everything

Jamie Simoson’s motherly intuition pushed her to seek further medical treatment for something her youngest son’s pediatrician assured her was a virus that needed to run its course. However, it was something she later learned required weeks of medical care and came with the possibility of lifelong effects.

HOW TO WATCH FOX WEATHER ON YOUR TV 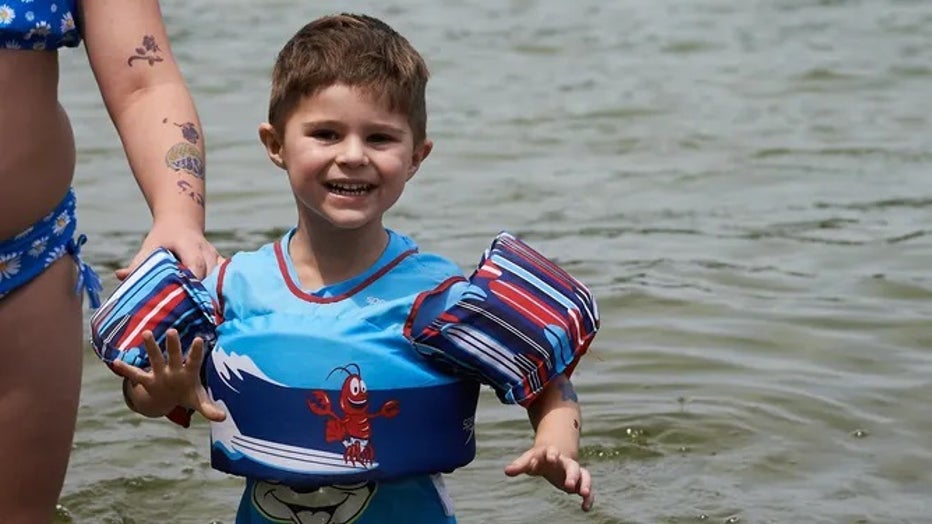 Jonny Simoson is one of the most energetic 3-year-olds you will meet, his mother said. As the youngest of three in the family, his mom and dad joke that if he were first, he'd be an only child.(Jamie Simoson)

The bite that changed everything

Jonny Simoson was swimming in a neighbor’s pool on June 15 when his mom noticed a small speck on his right shoulder blade. It was a tick smaller than a pen point.

"It was not embedded. It was not engorged. I easily removed it with a pair of tweezers, and it was still alive," Simoson said. "He didn't necessarily have any marks on his back shoulder until a few days later; there was just a tiny red bump. That was it." 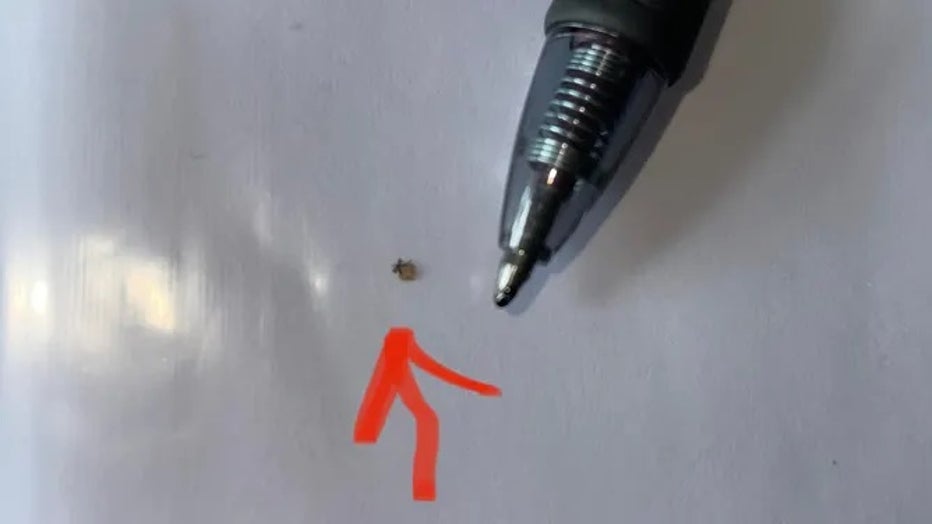 The tick shown above that bit Johnny was smaller than a pen point. (Jamie Simoson)

About two weeks later, Jonny’s daycare called saying he was not feeling well.

"He was mopey, had no appetite, and the fact that he was complaining about a headache was not normal for a 3-year-old," Simoson said.

Just that morning, his mom said he had been eating breakfast, playing with water guns and having the time of his life.

His symptoms got worse over the next two days. After a visit to the pediatrician, Johnny was sent home with some supportive medicines. He woke up that night with a fever.

"We called the doctor the very next morning, and I said he's sleeping a lot and that's really not like him," Simoson said.

After a second visit to the doctor, she took her son to the ER as his fever spiked above 104 degrees. He also showed no reaction to a Tylenol suppository, which was abnormal for a typically rambunctious boy.

TICK SEASON IS IN FULL SWING 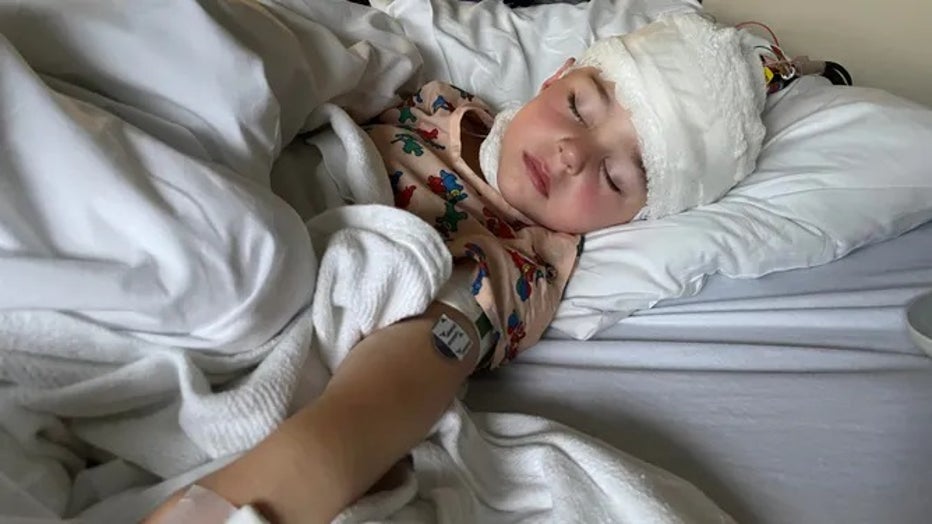 Days in the hospital turned to weeks. Elevated white blood cell counts swelled to 30,000. He was unusually drowsy and showed no signs of perking up after IV fluids.

A spinal tap found that he had increased neutrophils – a type of white blood cell that acts as the immune system's first responders – in his cord fluid. He was treated for bacterial and viral meningitis until doctors ruled them out.

Johnny was transferred to a specialty children's hospital, where he spent four days in the pediatric intensive care unit undergoing a coronary CT scan to rule out a brain bleed, an abscess or mass. All of those were ruled out.

"Things got really scary at that point," Simoson said. "It was so frustrating searching for an answer. We were terrified that we might not be coming home with our child."

However, after an MRI, neurologists were able to diagnose him with meningoencephalitis – an infection of both the brain and the thin tissue that surrounds it. After a night of intravenous immunoglobulin, a treatment for patients with antibody deficiencies, there were signs of hope. 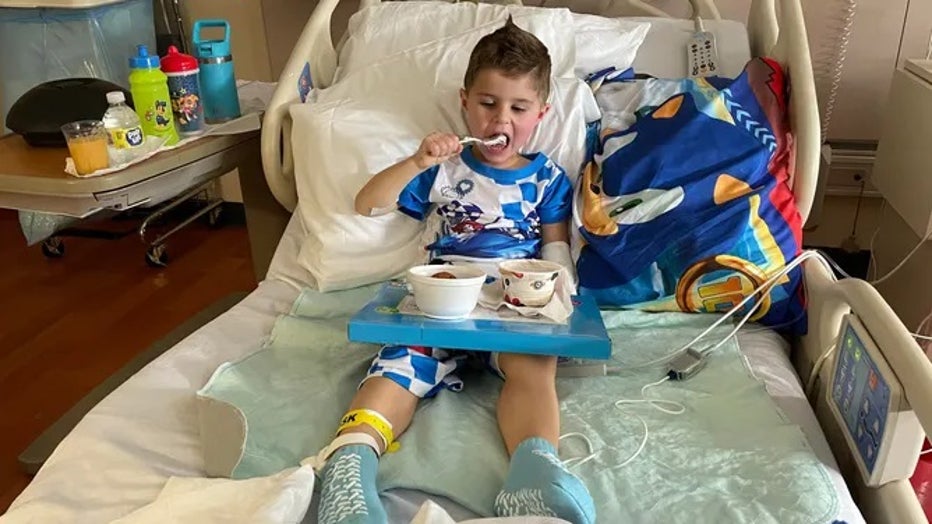 After a diagnosis of meningoencephalitis and proper IVIG treatment, there would be light at the end of the tunnel in Johnny’s road to recovery. (Jamie Simoson)

Simoson believes that IVIG made all the difference for her son.

"Within 15 hours of his first dose, I heard ‘Mommy, is that pepperoni pizza?’" she recalled.

In reality, it was simply a tissue box. To Johnny, however, it looked like a pizza box, and that's all the kid wanted – a slice of pie.

"So we started asking him questions to try to gauge his cognitive ability at this point," Simoson said.

After almost five full days of unresponsiveness, her son was alert and talking.

"It was amazing. That was the first time since the whole situation started that my husband and I both just completely broke down," she said with confidence, finally knowing that their little boy would be headed home soon.

There was light at the end of the tunnel for Johnny, but the toll of isolation was devastating.

"Isolation is hard on a toddler," Simoson said. "He started having ICU delirium and by the time he was allowed out of isolation, he did not want to go back to the room."

His parents had to teach him how to eat and drink again, as well as how to sit up and speak clearly.

"We had discussed inpatient rehabilitation with PT/OT, but found that the paperwork would delay our discharge by up to three more days," Simoson said.

They agreed that taking him home and searching for outpatient services was acceptable.

"We knew coming home was going to be hard," Simoson said. "He's active and doesn't understand his limitations. We were so excited to get out of the hospital but so scared of what happens next." 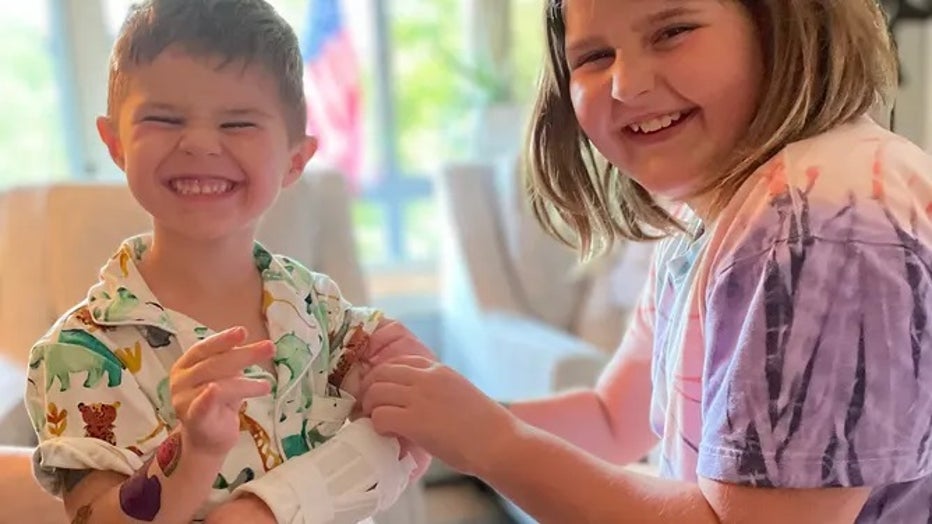 Johnny is recovering at home but still has some noticeable left-side deficiencies. (Jamie Simoson)

After 12 days, Johnny was finally discharged.

"Johnny was still not walking, and his balance was poor," Simoson said. "We knew we had a ton of work to do but were up for the challenge."

Three days after he was discharged, Simoson said, Johnny tested positive for Powassan virus – a rare and dangerous tick-borne disease.

According to the Centers for Disease Control and Prevention, human Powassan virus infections have been found in the U.S., Canada, and Russia. In the U.S., cases of Powassan have been reported primarily in the northeastern states and the Great Lakes region. These cases occur primarily in the late spring, early summer and mid-fall when ticks are most active.

Simoson said her son is recovering but still has some noticeable left-side deficiencies. She has started a Facebook page, so other's can follow his journey.

"He appears to have regressed a bit cognitively, but we are optimistic that his resilience will see him through," she said.

THESE ARE THE PESTS THAT BUG YOU EACH SEASON 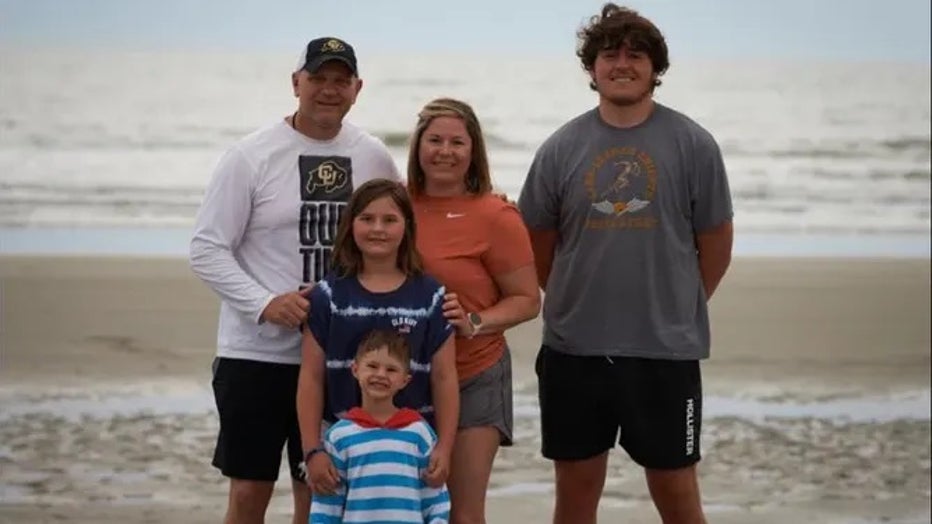 Simoson is now urging others to prevent tick bites and advocate for their children.

"You are the only one who knows them and what is normal for them, and if you don't feel right about it, advocate for them," she said. "Don't feel like you're questioning someone. That's your job."

Simoson is also urging people to donate blood. Her son had five doses of IVIG, a blood product, over the course of his hospital stay. With each dose, she said doctors saw consistent improvements.

"We are confident, it can't be proven, but we know deep down that IVIG was the turning point for Johnny, and if we can do anything to help someone else get that treatment quickly, that's really our goal," she said.

The FOX Weather app is a great resource that can be used to alert you of any watches or warnings issued for your area. The free FOX Weather livestream is also available 24/7 on the website and app and on your favorite streaming platform. The FOX Weather Update podcast also provides weather information for the entire country.