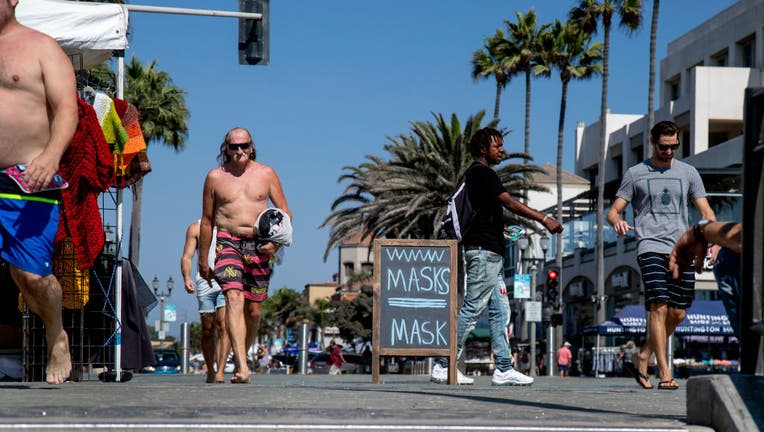 SANTA ANA, Calif. - Ten more people have succumbed to COVID-19 in Orange County, raising the death toll to 1,316, and officials also reported 162 new diagnoses of coronavirus, hiking the cumulative to 55,345.

Orange County Health Care Agency officials said Friday they were pleased to see new daily cases under 200, which keeps the county in the state's red tier. To get to the less-restrictive orange tier the county will have to begin averaging closer to 130 daily cases.

The county has reported 30 COVID-19 fatalities since Sunday, compared with 72 last week and 77 the week before. Of Friday's reported fatalities, four were skilled nursing facility residents.

Since the pandemic began, 480 of the COVID-19 victims who died were skilled nursing facility residents and 90 resided in assisted living facilities. The death reports are made sporadically from multiple hospitals and other sources, so the fatalities did not necessarily happen the day before.

The positivity rate, which was reported each Tuesday, inched up from 3.1% last week to 3.2%, and the daily case rate per 100,000 people rose from 4.4 to 5.2, which is higher than the cutoff of 3.9 to qualify for a move from the red to the orange tier in the state's coronavirus monitoring system.

Orange County CEO Frank Kim told City News Service on Friday that the county is averaging 4.9 per 100,000 residents, down from a peak of 5.4 on Oct. 5.

"Our numbers are heading in the right direction," Kim said.

According to the OCHCA, hospitalizations inched up from 172 Thursday to 176 on Friday, with the number of patients in intensive care ticking up from 62 to 64. The change in the three-day average of hospitalized patients decreased from 9.9% to 6.4%

The county has 31% of its intensive care unit beds and 66% of its ventilators available.

A Los Alamitos High School student has tested positive as has a staffer at Hopkinson Elementary School in the Los Alamitos Unified School District, but Kim said there is no evidence so far to suggest the student was infected at school.

"This appears to be a very normal type of infection that occurs as we re-enter the reopening and from what we can tell was not associated with an infection at school," Kim said. "The good news is the individual was identified, we're engaged in testing and the student is isolated. That's the good news. The system is working."

Los Alamitos Unified School District was among schools that applied for and won a waiver to reopen classes for personal instruction for kindergarten through sixth grade. The high school students returned to campus late last month.

An outbreak is defined as a few COVID-19 cases, and there have not been any outbreaks reported since schools have returned to personal instruction in the county, Kim said.

"We have not seen any outbreaks," Kim said.

UC Irvine students have been returning to campus as well and so far that has not led to any outbreaks, Kim said.

"My understanding is they're doing 4,000 tests and will be ramping up to 7,000 a week," Kim said. "So they're aggressively testing students and staff and that's a good thing."

Dr. Clayton Chau, director of the OCHCA and the county's chief health officer, said increased testing can lower the positivity rate, but it can also lead to an increase in the case rate per 100,000. The state introduced the health equity measure, which launched Tuesday, to help counties address highcase counts concentrated within certain ZIP codes that include high-density housing and language barriers, among other issues.

Orange County got a head start on that weeks ago with its Latino Health Equity program, which raised awareness of coronavirus within hot spots in Santa Ana and Anaheim, Chau said. Positivity rates as high as 20% have fallen to single digits in some of those neighborhoods, Chau said.

There is an "accelerator" in the state's formula that if the positivity rate makes it to the least-restrictive yellow tier but the case rate is in the red, then a county can move up to orange, Chau said.

At a news conference on Thursday, Orange County Board Chairwoman Michelle Steel called for more "local control" on determining the reopening of businesses, decrying "Sacramento's one-size-fits-all" policy that she said "punishes" Orange County with the health equity measure that makes it more difficult to move up to the orange tier.

Chau, however, defended the health equity metric, saying the county's own version of, which was implemented before the state instituted its policy, was an eye-opener.

RELATED: Orange County expected to move to next tier in Newsom reopening blueprint

"The issue of health equity" in lower socio-economic neighborhoods "existed before Covid, but because of Covid it has brought this issue to the forefront and has forced us together as a community... to really have to come together to address this issue," he said.

County officials are working on improving the overall health of needy families, which includes reducing diabetes, hypertension, depression, obesity and substance abuse. Chau said, for instance, that county officials helped an Irvine Valley College student who said recently he was infected with COVID-19and so were two of his family members, but they could not quarantine because two families lived in their residence.

Chau pledged to work with nonprofits and other community partners to address the health inequities in poorer communities.