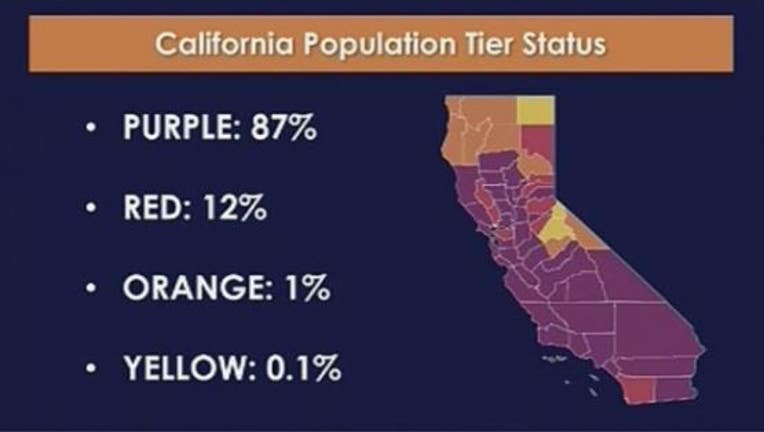 ORANGE COUNTY, Calif. - Orange County health officials have been told the county is expected to move up from the purple to the red tier by Tuesday as it has met the state's metrics for two weeks.

"This significant move to the red tier for Orange County indicates that we are hopefully getting the upper hand on COVID-19,'' Supervisor Lisa Bartlett said.

"Our numbers are holding steady or declining, we still have excess capacity in our hospital system and as long as we all continue to follow prescribed health and safety guidelines our trend should keep improving in the county. I look forward to cautiously opening up our local economy so we experience some level of normalcy once again in our day-to-day lives.'' 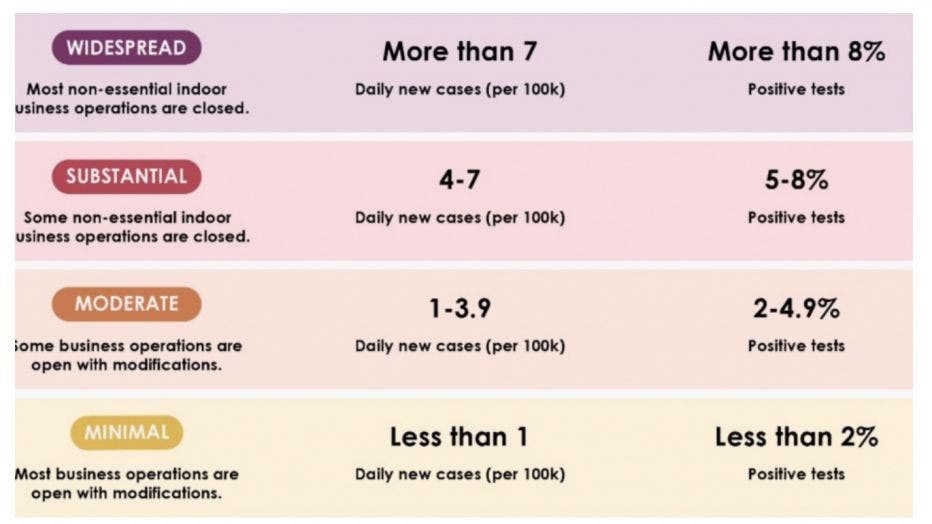 Under the red tier of Gov. Gavin Newsom's Blueprint for a Safer Economy unveiled last week, the county will be able to reopen movie theaters and restaurants for indoor dining at 25% capacity and churches for indoor worship at 25% capacity.

Shopping centers may expand from 25% capacity to half capacity under the red tier.

The new deaths increased the county's overall fatalities to 1,042, while a total of 49,258 cases have been confirmed in the county since the pandemic began.

Of the deaths reported Friday, seven were skilled nursing facility residents, according to the Orange County Health Care Agency.

The county now meets all of the state's metrics to move up to the state's red tier, up from purple, the worst level. The state unveiled the four-tier economic-recovery roadmap last week.

Individual counties must meet state standards for new cases per 100,000 residents and testing-positivity rates, both over a seven-day average,
to move up the ladder of tiers.

But even with the positive trends, the earliest Orange County's schools can reopen for personal instruction is Sept. 22. County officials had argued for credit for time spent off the state's coronavirus watch list before the state switched to the tier system, changing the way it evaluated progress against curbing the spread of coronavirus.

However, county officials were told the state did not want to establish a precedent.

"We were quite frustrated ... we weren't able to open schools Sept. 8 because we met the (state's) criteria,'' Orange County CEO Frank Kim said earlier this week.

"We would have liked to have been provided credit for those days where we were meeting'' the state's criteria to get off the watch list, Kim said.

However, Kim did praise the state's new tiered system, because it is "easy to understand.''

A new battle cry in Orange County… Open Cali Now… that’s a new website that asks for signatures to persuade the governor to allow for local control during the pandemic.

Orange County Supervisor Don Wagner held a news conference Friday to
announce a "nonpartisan reopen coalition'' to push for a faster restart of the
local economy. He criticized Newsom in a news release for ignoring "local
leaders as he shifts from one COVID shutdown strategy to another without
explanation.''

Newport Beach Mayor Will O'Neill and Lake Forest City Councilman
Dwight Robinson were among those in attendance.

Dr. Margaret Bredehoft, director of the Health Care Agency's Public Health Services, said this week the county has received 130 applications for waivers from schools to reopen kindergarten through sixth grade classes for personal instruction. The county has approved 119, and the state has approved
98 of those, Bredehoft said.

All of them are religious or other private schools except for the ones in the Los Alamitos Unified School District.

If schools are allowed to reopen from kindergarten through high school
on Sept. 22 it will be left up to each school district whether to do so.