SANTA ANA, Calif. (CNS) - A 42-year-old man was convicted Wednesday of stabbing his girlfriend to death and killing their two young sons in the city of Orange about a decade ago. 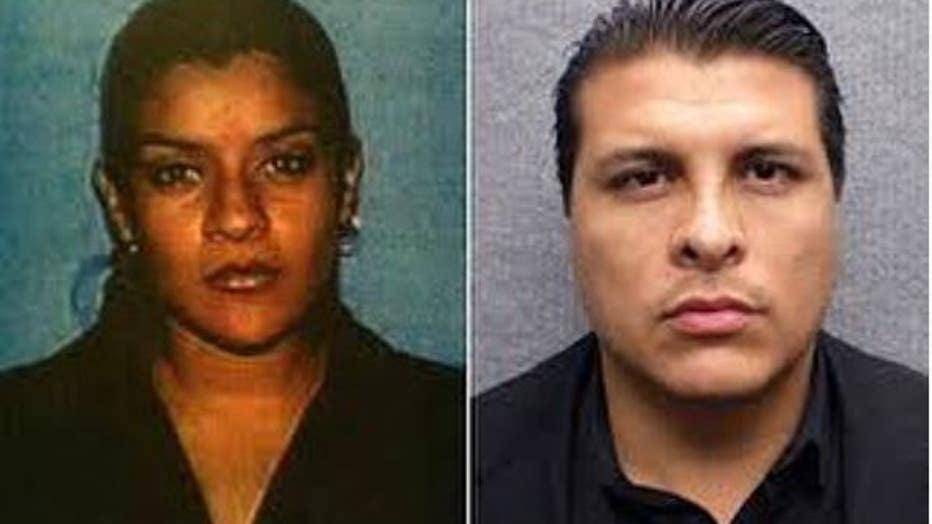 Shazer Fernando Limas (R) faces life in prison without possibility of parole. He was convicted of killing 31-year-old Arlet Hernandez-Contreras (L) as well as the couple's sons.

Shazer Fernando Limas, who was scheduled to be sentenced Feb. 3, was convicted of three counts of murder with special circumstances allegations of committing more than one murder. Jurors began deliberating at about 4 p.m. Tuesday and reached verdicts by Wednesday afternoon.

Limas faces life in prison without the possibility of parole.

According to the prosecutor, the defendant said, "I hate her. I wish she did not have these kids. Arlet is ruining my life. I wish she was gone."

Hernandez-Contreras' body was recovered April 25, 2012. The bodies of the children were never found, Guirguis said.

"When she was discovered, she was wrapped in a comforter," Guirguis said in his opening statement of the trial. "She had 48 stab wounds... She was stabbed all over."

Limas had an "on-again, off-again" relationship with Hernandez- Contreras, and the victims had been living with Limas in his two-bedroom apartment in Orange from time to time, Guirguis said.

But Limas, who had many girlfriends, "denied having kids to many people, including his girlfriend at the time," Guirguis said. "He told another he wished he had no kids and Arlet was gone from his life."

Hernandez-Contreras was a "constant interruption in his life," Guirguis said, adding she often would show up at his home "making a scene."

Hernandez-Contreras told the police she wanted to retrieve her belongings in Limas' apartment, but he was blocking her from doing so. An officer who responded to the call, however, could not find any women's belongings in the apartment.

The victim did eventually get back into the apartment later, according to both the prosecution and defense.

"No one sees them again (after April 12)," Guirguis said of the victims.

Limas' mother tried calling her daughter that day, but there was no response, the prosecutor said.

The victim's mother also tried unsuccessfully to contact her daughter through text messages, but then Hernandez-Contreras' mother began receiving "weird texts" from her daughter, which were actually sent by Limas, who had her phone, Guirguis said. Limas, pretending to be the victim, said she was going on a trip.

Limas called his girlfriend the night of April 14 saying he cut his hand in a fight at a restaurant and he needed her help, Guirguis said. The girlfriend attempted to treat the knife wounds with Neosporin and other aids, but eventually she convinced him to go to a hospital.

Limas used a friend's name with help from the man's ID to get sutures at the hospital in Long Beach, Guirguis said. He lied to the doctors about how he got the wounds, the prosecutor added.

Limas then went about his life as normal, going to dinners, parties, comedy shows and "renting limos," Guirguis said. One night, police were called about noise complaints from a party he was hosting and he gave a false name to officers, Guirguis said.

Limas hired a friend to mop up blood in the apartment and was seen tossing children's clothing, a high-chair and stroller in the trash, the prosecutor said.

On April 24, 2012, he rented a Uhaul truck and gave away furniture, Guirguis said. He went to Home Depot to buy a tarp and a "very large chest," Guirguis said.

Limas put Hernandez-Contreras' body in the chest and dumped it in an "industrial area" of La Puente, where it was found April 25, 2012, Guirguis said. Evidence was also presented from cell phone movements that he drove into the mountains.

The victim's body was badly decomposed when it was found and the identity was determined through fingerprint records, Guirguis said.

Limas suddenly "broke his lease" and left his apartment on April 28, 2012, Guirguis said. When maintenance workers were called in to check the apartment in May of that year there was an oppressive stench in the apartment and bleach stains in the carpet and blood spatter on the walls and ceiling, Guirguis said.

When the carpet was pulled up there were "large pools of blood" that was eventually linked to the victim, he added.

On May 3, 2012, when police attempted to pull the defendant over for a traffic stop he led them on a high-speed chase, Guirguis said. Police needed a spike strip to end the pursuit.

Limas told a friend who visited him in jail that his sons were "safe with God," the prosecutor said.

Limas' attorney, Michael Hill, stated that the defendant did indeed kill Hernandez-Contreras, but he "did not kill his children or harm them in any way."

Limas' attorneys implied that Hernandez-Contreras killed her sons. The defendant is a "womanizer who cheated on girlfriends and the mother of his children," Hill said. Hernandez-Contreras was clearly "distressed with his infidelity" and often confronted him about it.

She would reach out to his girlfriends and warn them to stop seeing him, Hill said. She would also "threaten to kill her children," he added.

"She followed through with these threats, and it resulted in her death," the defense attorney said.

"It's clear from the forensic evidence she died in the apartment," Hill said. "Mr. Limas sustained significant injuries to both hands.'

Limas' wounds, which were consistent with someone grabbing a knife, were so deep his girlfriend could see the tissue exposed, Hill said.

But the defendant's actions following the killing were not "indicative of someone who had a plan," Hill said. "He was a man in reaction mode. Ultimately, you will determine he is responsible for Arlet's death... However, you will not hear any evidence he killed his children."