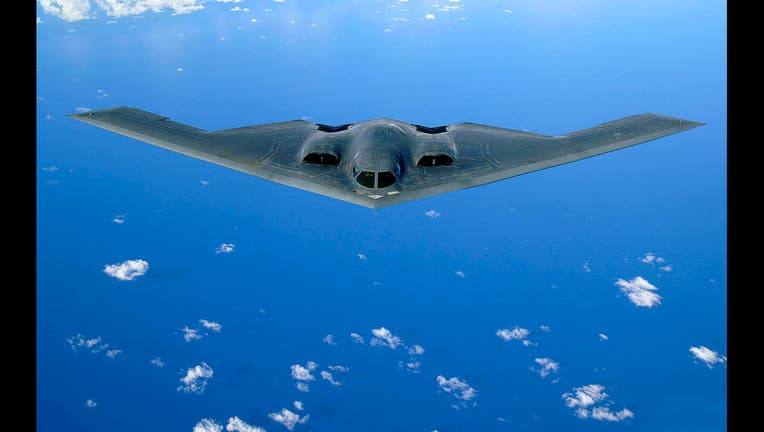 WASHINGTON, DC (CNS) - The U.S. Air Force awarded Northrop Grumman Corp. a contract worth up to $60 billion today to build the nation's next-generation stealth bomber -- a project that is expected to be a major boon to the Southland's aerospace sector with much of the assembly work likely to be done in the Palmdale area.

An onslaught of new job openings are expected in the wake of the contract for a fleet of radar-evading long-range bombers to replace the 30-year-old B-1 and the Eisenhower-era B-52.

"This is a huge win for the Antelope Valley and California's aerospace industry," said Assemblyman Tom Lackey, R-Palmdale. "Hundreds of new jobs will be created which will provide a badly needed injection into our local
economy."

The Long-Range Strike Bomber will be one of the Pentagon's biggest weapons systems of the next decade, and is slated to enter service in the mid-2020s.

The fleet will "extend our ability to reach any target around the world," Defense Secretary Ash Carter said, calling the aircraft the "backbone" of the military's new air program.

The estimated $60 billion initial contract is one of the largest in Air Force history and culminates an intense four-year battle involving three of the world's largest military contractors. Northrop Grumman was battling for the
contract against a combined bid by Boeing Co. and Lockheed Martin Corp.

Much of the plane will likely be assembled at Air Force Plant 42 in Palmdale, a 5,800-acre industrial park owned by the military but leased to aerospace contractors. According to some reports, the project could create more
than 6,500 aerospace jobs in the area -- helping to offset recent Pentagon spending cuts that have crippled the industry locally.

"This announcement means thousands of jobs will be coming to California, and that's great news," she said. "When the Legislature created the tax credits to help Northrop Grumman and the team of Lockheed Martin and
Boeing compete for the Department of Defense's long-range bomber project, this is exactly the outcome we wanted to see."

The state Legislature approved tax breaks of nearly $500 million for whichever company won the contract to encourage them to build the planes in Palmdale.

The new bomber is an Air Force priority because the oldest ones in its fleet have far outlived their expected service life and even the newest -- the B-2 stealth bombers -- have been flying for more than two decades, said Deborah Lee James, the secretary of the Air Force.

A third bomber, the B-1, is used heavily for conventional strikes, but no longer is certified for nuclear missions.

The Air Force has said it will buy up to 100 of the new bombers for $550 million each. While the new plane's specific capabilities are highly secret, it likely will be equipped with high-tech communications gear and other electronics that would allow it to perform a variety of missions, not just dropping bombs, according to news reports.

The first version will be piloted and carry conventional weapons, followed by a version that can carry nuclear warheads. An unmanned model may follow.