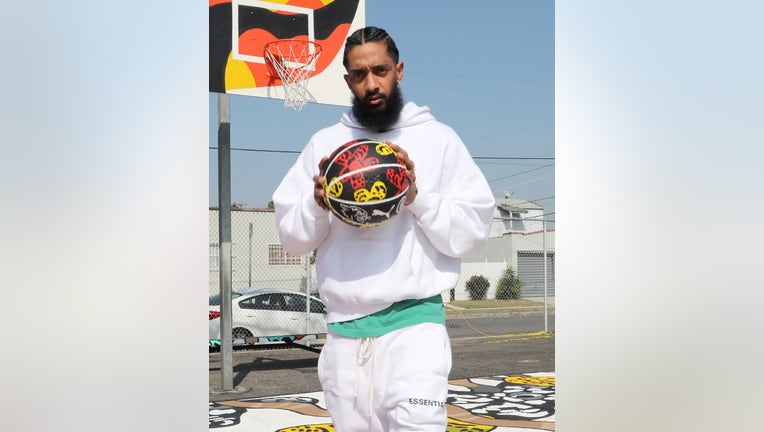 LOS ANGELES - The year since Nipsey Hussle was gunned down has not diminished the rapper’s legacy, but rather cemented it and continues to prove true his catchphrase, “The Marathon Continues.”

Tuesday marks the first anniversary of Hussle’s death and his popularity and influence pushes forward as strong as ever. He won two posthumous Grammys in January, he remains a favorite of his hip-hop peers and his death has reshaped his hometown of Los Angeles in some unexpected ways.

Throughout the city, murals dedicated to Hussle have been painted, rival gangs have had peace talks and a group of men convene in a cross-country book club to discuss books recommended by the rapper.

“It shows you how powerful and great he is,” said DJ Khaled, who won a Grammy with Hussle and Legend for “Higher” for best rap/sung performance. Hussle’s song “Racks in the Middle” featuring Roddy Ricch and Hit-Boy took home an award for best rap performance.

“He was so much of a blessing as a father, entrepreneur, an incredible artist and young mogul,” said Khaled, who took part in a poignant Grammy tribute to Hussle. “We learned a lot from him, and we’re still learning. His music spoke volumes. It touched people in different ways. I was blessed to work with him.”

Hussle’s allure grew to new heights after he was killed outside of his South Los Angeles clothing store, The Marathon. The rapper’s alleged shooter, Eric Holder Jr., is in a Los Angeles County jail awaiting a trial that was expected to begin by late spring, but proceedings have been delayed because of a court shutdown over the coronavirus.

A grand jury indicted Holder for murder for Hussle’s killing and attempted murder after two men who were standing next to the rapper were wounded. Holder has pleaded not guilty. Testimony released last year provided a detailed accounting of what led up to the killing, including a conversation between Hussle and Holder that discussed snitching.

After Hussle’s death, an unexpected cease-fire developed between some rival gang members.

“It created an opportunity for conversations to happen, for communication to happen, for leadership to happen that maybe wouldn’t have happened otherwise in the memory and spirit of Nipsey Hussle,” Anne Tremblay, director of Gang Reduction and Youth Development program in Los Angeles, said earlier this year.

The 33-year-old rapper, whose real name was Ermias Asghedom, was an Eritrean-American father of two who was engaged to actress Lauren London. He was a beloved figure for his philanthropic work that went well beyond the usual celebrity “giving back” ethos. Following his death, political and community leaders were as effusive in their praise as his fellow hip-hop artists.

“The biggest thing that he left behind in his legacy is to go the extra mile for other people and be aware of your community,” singer Tinashe said in an interview last week. “That spirit is really important. It’s important to bring people together. I think that’s part of his message. It’s looking out for one another.”

The rapper was also a wildly popular figure among professional athletes, especially those based in LA, where he was a regular on the sidelines. Players admired him for his community building.

After years of selling his highly popular mixtapes out his car trunk, Hussle broke through in 2018 with “Victory Lap.” His critically-acclaimed, major-label debut album on Atlantic Records earned him his first Grammy nomination, though he lost out to Cardi B’s “Invasion of Privacy.”

“You can go back and listen to his old music and find these gems just like you’re listening to on ‘Victory Lap,’’” said Thug, who recorded the song “Go Long” with Hussle and Z-Ro. “He’s got so much old music I listen to. It’s timeless, because he’s a storyteller. His music doesn’t get dated. I hate that he’s not here in the flesh and seeing the praise he certainly deserves. A lot of people didn’t even know about him until he passed. I hate to see that he had to pass to get his shine.”

Hussle purchased the strip mall where The Marathon is located and planned to redevelop it into a mixed-use commercial and residential complex. The plan was part of Hussle’s broader ambitions to remake the neighborhood where he grew up and attempt to break the cycle of gang life that lured him in when he was younger.

However, since Hussle’s death, his flagship store has been fenced off and closed for the “foreseeable future,” the business announced on social media last year. The online store still accepts orders, and Puma reissued Marathon clothing.

It’s unknown when Hussle’s family will release any new music. But his production company, Marathon Films, and filmmaker Ava DuVernay are in discussions with Netflix to produce about documentary about the rapper.

“Everything he embodied and encompassed is living on through him,” said Karen Civil, a former business partner and co-founder of the Marathon Agency, a marketing and branding firm. She played a pivotal role in planning his memorial service at the Staples Center, where she read an open letter from former President Barack Obama to Hussle.

“That’s the incredible part about him,” she said. “He not only created change in his community, but all around the globe.”