Three-year-old Colt Parris is doing much better after doctors believed he suffered a stroke after contracting COVID-19.

LOS ANGELES - According to a study from the National Institutes of Health, researchers found evidence to suggest that brain damage may be a product of COVID-19.

"We found that the brains of patients who contract infection from SARS-CoV-2 may be susceptible to microvascular blood vessel damage. Our results suggest that this may be caused by the body’s inflammatory response to the virus" said Avindra Nath, M.D., clinical director at the NIH’s National Institute of Neurological Disorders and Stroke (NINDS).

Nath, the senior author of the study added that while COVID-19 is most commonly known to be a respiratory illness, he hopes this study will help the medical community recognize the scope of complications that can arise out of contracting the deadly coronavirus.

"We hope these results will help doctors understand the full spectrum of problems patients may suffer so that we can come up with better treatments," Nath said.

In this study, researchers analyzed brain tissue samples from 19 patients who had died from complications relating to COVID-19 between March and July 2020. The ages of these patients were between 5 and 73 and they died within a few hours to two months after reporting coronavirus symptoms, according to the study.

Researchers noted that many of these patients also had one or more risk factors, including diabetes, obesity and cardiovascular disease.

After examining the patients’ brain tissue, researchers determined that the damage they identified in the brain was that most commonly associated with strokes or other neurological disorders.

"We were completely surprised. Originally, we expected to see damage that is caused by a lack of oxygen. Instead, we saw multifocal areas of damage that is usually associated with strokes and neuroinflammatory diseases," said Dr. Nath.

Researchers were expecting to find damage caused by a lack of oxygen since COVID-19 attacks the lungs preventing oxygen from getting to other organs that desperately need it to function properly.

"So far, our results suggest that the damage we saw may not have been not caused by the SARS-CoV-2 virus directly infecting the brain," said Dr. Nath. "In the future, we plan to study how COVID-19 harms the brain’s blood vessels and whether that produces some of the short- and long-term symptoms we see in patients."

Previous studies have indicated that people infected with COVID-19 may suffer other neurological effects.

In a separate October study of more than 84,000 people, led by Adam Hampshire, a doctor at Imperial College London, researchers found in some of the worst cases, patients experienced mental decline equivalent to the brain aging by 10 years.

When analyzing data from the patients, study authors said they found significant cognitive decline in some individuals."[Cognitive deficits] were of substantial effect size for people who had been hospitalized, but also for mild but biologically confirmed cases who reported no breathing difficulty," the researchers wrote in a post published on MedRxiv. "Finer grained analyses of performance support the hypothesis that COVID-19 has a multi-system impact on human cognition." 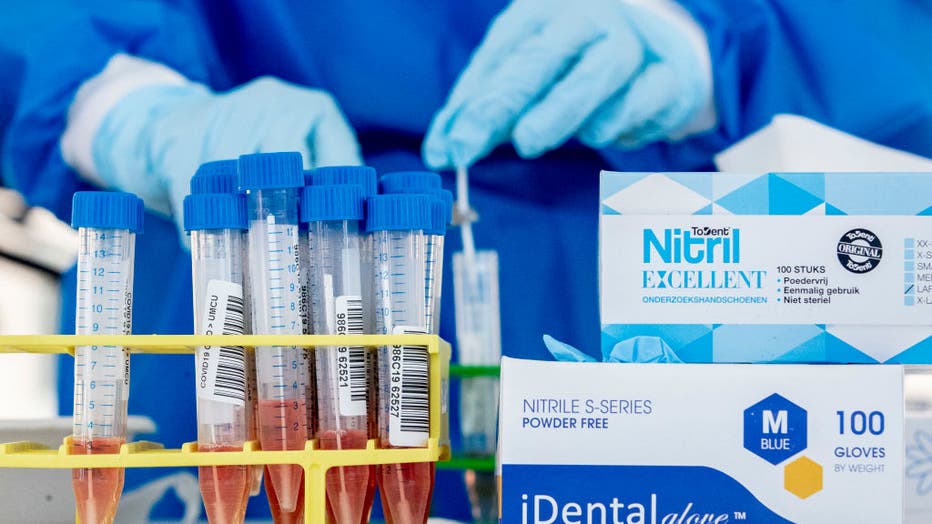 UTRECHT, NETHERLANDS - SEPTEMBER 22: View of corona test tubes at a testing location on September 22, 2020 in Utrecht, Netherlands. There is a shortage of test capacity in the country, so teachers and medical personnel have priority in testing. (Phot

Doctors told the parents of three-year-old Colt Parris they believed that the deadly virus triggered a blood clot, leading to a stroke.

"The COVID diagnosis is important because we think the reason why this patient with COVID, including the child, have strokes and a variety of other problems is that they have propensity to form clots," Neurologist Dr. Camilo Gomez said. Gomez also treated Colt.

However, neurological issues are not the only complications tied to COVID-19.

In a study published in September, researchers from Ohio State University found that out of more than two dozen athletes from the university who tested positive for COVID-19, 30% had cellular heart damage and 15% showed signs of heart inflammation caused by a condition known as myocarditis.

Acoording to the Mayo Clinic, myocarditis is typically caused by a viral infection with symptoms ranging from chest pain, fatigue, shortness of breath, to a negative impact on heart rate and rhythm as seen in conditions such as arrhythmias.

The U.S. Centers for Disease Control and Prevention tweeted on Sept. 17, "Heart conditions like myocarditis are associated with some cases of #COVID19. Severe cardiac damage is rare but has occurred, even in young, healthy people."