PREVIOUS COVERAGE: Newsom, Dahle square off in only gubernatorial debate

California Gov. Gavin Newsom and State Sen. Brian Dahle faced off in their only debate Sunday, ahead of the gubernatorial election in November.

SACRAMENTO, Calif. (AP) - California’s sleepy race for governor ends Tuesday and Democratic incumbent Gavin Newsom is an overwhelming favorite to win a second term leading the nation’s most populous state, a platform that could propel him to a presidential run.

Newsom survived a recall attempt last year driven by critics of his handling of the pandemic. More than 60% voted to keep him in office and that strong showing scared away any well-known Republican candidates from this year’s election.

Newsom hardly campaigned, instead using some of the tens of millions of dollars in his campaign account to pay for ads in other states on gun control, abortion rights and other issues as part of his attempt to reshape the national Democratic Party’s message.

He wants Democrats to be more aggressive, believing they have ceded the political narrative to Republicans. It’s a strategy that has gotten him lots of media coverage and increased speculation that he plans to run for president.

"He’s already moved past his reelect. He’s focused on being a leader of his party nationally and positioning himself for a White House run," said Rob Stutzman, a California-based Republican political consultant.

Newsom has consistently denied he’s planning to run for president, saying he supports President Joe Biden and Vice President Kamala Harris, a fellow Californian and good friend. During the only debate of the campaign last month, Newsom promised to serve a full four-year term if he’s reelected.

"You all know he’s running for president of the United States. It’s obvious," Dahle told reporters after the debate. "He’s not focused on California. And Californians are suffering."

For Dahle, there was little political risk in running for governor because he did not have to give up his seat, which covers the state’s sparsely populated northwest corner. But he struggled to get donations in a year when Republican donors are more focused on California’s competitive U.S. House races, which will help determine which party controls Congress.

Dahle raised less than a million dollars, making it impossible for him to mount an effective statewide campaign to introduce himself to voters. He’s had to rely on social media and traditional media coverage. He spent the final weeks of the campaign driving a semi truck around the state with a large campaign banner. 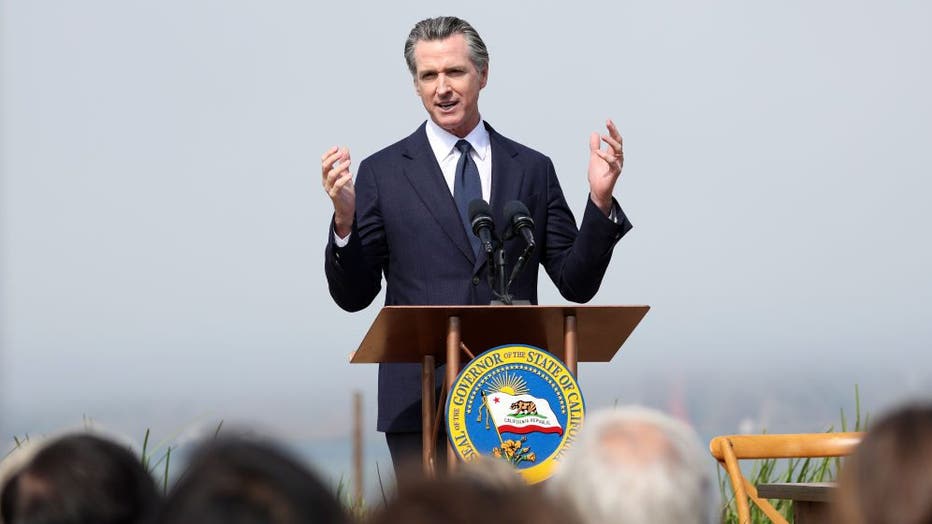 "The power brokers are behind Gavin Newsom, and most people think this is a long shot," Dahle said last month. "This is a tough state for Republicans."

Newsom’s lack of campaigning likely won’t affect the outcome of his race, but it could impact Democrats running for seats in the state Legislature. Andrew Acosta, a Democratic California-based political consultant, noted a similar environment in 2014, when then-Democratic Gov. Jerry Brown didn’t campaign and got 60% of the vote to win a second term but Democrats lost some legislative seats.

"The governor’s race is decided. There are other races in California that are contested, Democrat vs Republican races, it will be interesting to see how some of these Democrats fair in a state where the governor could get 60% of the vote again," Acosta said.

Newsom spent the final weekend of the campaign traveling the state to boost other Democratic candidates and causes. He rallied voters on Sunday to support a ballot initiative to make abortion a constitutional right in California. And he appeared with a pair of Southern California Democratic congressional candidates — Christy Smith and U.S. Rep. Katie Porter.

With no political threats at home, Newsom has spent much of his first term doing the kinds of things that would make him attractive to Democratic presidential primary voters.

He signed more than a dozen new laws aimed to make California a sanctuary for women in other states seeking abortions. He ordered state regulators to ban the sale of most new gas-powered cars by 2035. His budgets have paid for every 4-year-old to go to kindergarten for free and will cover the health care costs of all low income immigrants in California who are living in the United States illegally.

Meanwhile, rising inflation has only increased California’s already high cost of living, contributing to the state’s first population decline and the loss of a congressional seat. State tax collections have fallen below expectations this year, setting up potential budget cuts.

An increase in crime, including organized shoplifting rings in the state’s major cities, has contributed to a general sense of unease among voters.

And the state’s nation-leading homeless population continues to grow, despite an endless flow of money and new programs — all things Newsom would have to answer for in a presidential campaign.

Newsom says his priorities for the next four years include a plan to "address the vexing issues of extremes."

"Extreme drought, extreme weather, extreme polarization in our body politic as it relates to preserving and protecting democracy," Newsom said. "The rights revolution has been rolled back in real time in so many red states, all of those things are very consequential. And this state has more to lose, more to gain, than any other state in the country."