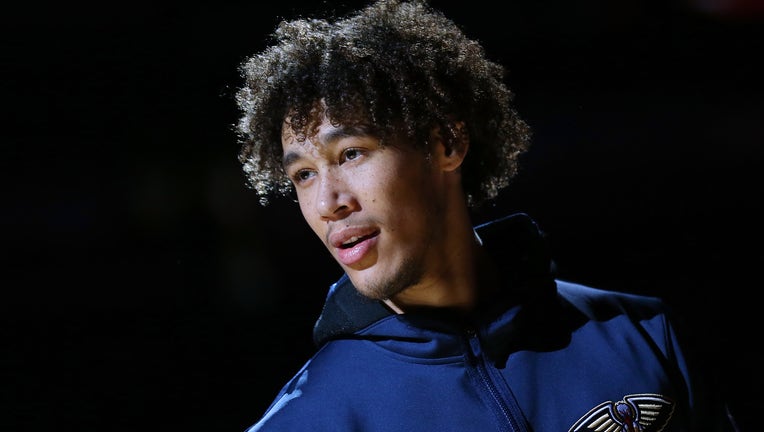 NEW ORLEANS, LOUISIANA - NOVEMBER 24: Jaxson Hayes #10 of the New Orleans Pelicans reacts before a game against the Washington Wizards at the Smoothie King Center on November 24, 2021 in New Orleans, Louisiana. NOTE TO USER: User expressly acknowledg

LOS ANGELES - New Orleans Pelicans center Jaxson Hayes -- who pleaded no contest to two misdemeanor charges stemming from a run-in that resulted in his arrest last summer in Woodland Hills -- was sentenced Tuesday to 450 hours of community service, 52 weeks of domestic-violence classes and three years of probation

Hayes, now 22, pleaded no contest Feb. 24 to one misdemeanor count each of false imprisonment and resisting an officer, according to the Los Angeles City Attorney's Office.

He was given credit for one day already served in jail, will be subject to a protective order and will be ordered to pay restitution in an amount that is still to be determined, according to the City Attorney's Office.

Ten other misdemeanor counts against him, including infliction of corporal injury and vandalism, were dismissed as a result of his plea, according to court records.

According to body cam footage released by Los Angeles police about a month after Hayes' July 28 arrest, a cousin of Hayes' girlfriend called police and told a dispatcher the woman sent text messages claiming Hayes was "getting loud and violent and she's scared and can't call the police herself."

Police responded about 3 a.m. July 28 to the 22000 block of Mariano Street, where the police body cam video showed Hayes and another man in front of a house.

Hayes told officers he and his girlfriend "were just having a little argument. She was throwing some stuff at me."

Officers are shown repeatedly ordering Hayes to remain outside while they talk to the woman inside. He demanded to know whether they had a warrant to enter his house and they told him they didn't need one.

"You're not gonna kick me out of my house, bro," Hayes told the officers as the man who was outside with him repeatedly asked Hayes to relax.

Hayes is shown trying to get into his house as officers begin to restrain him. As he continues to resist being handcuffed, the officers warn that they will use a Taser on him.

Hayes told the officers three times "I can't breathe," when one officer had a knee near his neck. A different officer ordered that officer to "Get your knee up," and the kneeling officer complied.

Hayes was Tased once on his chest and once on his buttocks, the video shows, and handcuffs were eventually applied and officers helped Hayes from the ground and into a chair.

Before being booked, Hayes received medical treatment at a hospital for injuries suffered during the altercation and was medically cleared for booking at the Van Nuys jail, police said.

A separate body cam video from a sergeant at the scene shows Hayes shoving an officer into a wall as that officer tries to handcuff him early in the altercation. The officer suffered an elbow injury and was treated at a hospital.