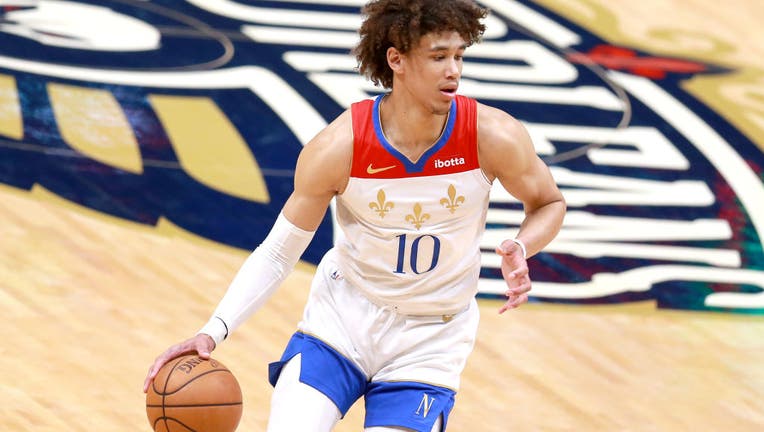 NEW ORLEANS, LOUISIANA - APRIL 09: Jaxson Hayes #10 of the New Orleans Pelicans dribbles the ball down court during the fourth quarter of an NBA game against the Philadelphia 76ers at Smoothie King Center on April 09, 2021 in New Orleans, Louisiana.

LOS ANGELES - Los Angeles Police Chief Michel Moore said Tuesday that a categorical use of force investigation was launched into the arrest of New Orleans Pelicans player Jaxson Hayes, who was arrested during an "altercation" while police investigated a report of a domestic dispute.

Categorical use of force investigations often concern incidents of deadly force by officers. The Hayes' case involves "the possibility of force being applied to the suspect's neck during the use of force in taking him into custody," Moore said. The use of force was initially investigated as non-categorical, which is a lower level use of force, but investigators discovered that Hayes made a complaint that "he could not breathe, that there was a constraint or restriction on his neck" Moore said.

The Los Angeles Police Department launched an investigation after New Orleans Pelicans center Jaxson Hayes was arrested following an altercation with officers in Woodland Hills. According to the department, the incident may have involved force being applied to Hayes’ neck.

The investigation will be conducted by the Use of Force Review Board, which will submit its findings and recommendations to Moore. The Los Angeles Police Commission will also receive the report.

The arrest occurred at about 3 a.m. July 28, when officers went to the 22000 block of Mariano Street on a call of a domestic dispute, according to the Los Angles Police Department.

"Officers made contact with a male, later identified as 21-year old Jaxson Hayes, in the front yard of a residence," an LAPD statement said. "It was later determined that Hayes is (a) professional basketball player for the National Basketball Association. Officers informed Hayes they received a call at the location and needed to speak with the victim, but requested Hayes remain outside while they did so.

"Body worn video captured Hayes repeatedly attempting to enter the residence despite officers blocking his path and verbal commands for him to remain outside," police said. "Officers requested a backup and they attempted to place Hayes' hands behind his back; however, Hayes broke free of the officers' grasp and pushed one of the officers into a wall."

Officers then forced Hayes to the ground, police said.

"Once on the ground, Hayes attempted to get up and continued resisting officers," police said. "Officers utilized two deployments of the taser, as well as body weight and physical force during the altercation, which lasted for approximately two and a half minutes before officers were able to handcuff Hayes."

Hayes was arrested and booked on suspicion of resisting arrest, police said. Before he was booked, he received medical treatment at a hospital for injuries suffered during the altercation and was medically cleared for booking at the Van Nuys Jail, police said. He was released on $25,000 bond, according to the Los Angeles County Sheriff's Department.

An officer suffered an injury, and was treated at a hospital and released, according to police.

"There was a female at the location who declined to cooperate with officers' investigation into the original domestic dispute call," according to police, who did not release further details.