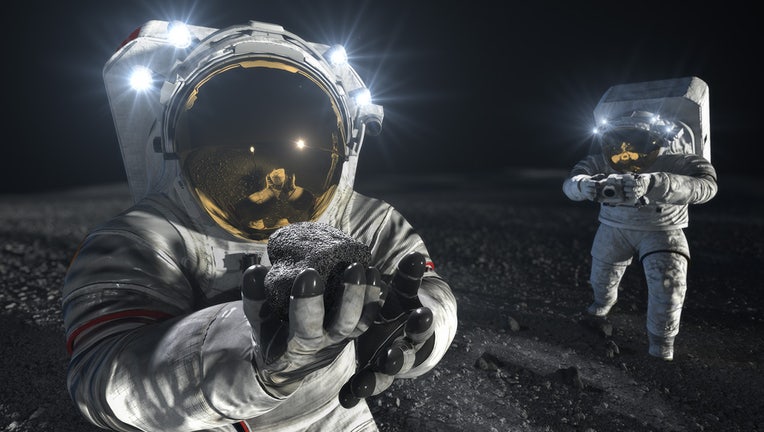 FILE - An artist’s illustration of two suited crew members working on the lunar surface. The one in the foreground lifts a rock to examine it while the other photographs the collection site in the background. (NASA)

NASA has tapped two private American companies to develop the next spacesuits for moonwalking, spacewalking and beyond.

On Wednesday, the U.S. space agency revealed that it selected Collins Aerospace and Axiom Space to create spacesuits to be worn by the first humans to visit the moon in more than 50 years.

According to NASA, the milestone-based contracts have a $3.5 billion maximum value through 2034. These new spacesuits could be used as soon as 2025 during Artemis-3, the first human mission to the moon since Apollo 17.

Under its heritage company Hamilton Standard, Collins Aerospace manufactured spacesuits worn by the moonwalkers during the Apollo program. ILC Dover and Oceaneering are also partners with Collins on the spacesuit development.

Collins Aerospace senior technical fellow and retired NASA astronaut Dan Burbank said he even tried on a prototype of the xEVA suit on the morning of the announcement.

"We continually do a design, build, test, repeat, and evolve that the technology as we go, it will be tested in more and more flight-like environments, including thermal vacuum," Burbank said.

Axiom Space recently launched its first all-private human mission with SpaceX to the International Space Station. The company has plans to build the first private space station, beginning with modules attached to the ISS.

Last fall NASA put out a call for commercial companies to submit proposals for Exploration Extravehicular Activity Services (xEVAs) contracts. NASA planned to award one or more contracts to private companies by April 28, according to the contract timeline.

This is the first contract under NASA's Johnson Space Center's EVA Human Surface Mobility Program, which will work toward moonwalking plans and develop human rover systems for the lunar surface.

About 40 companies submitted bids for the xEVA contract. That list included companies involved in NASA’s current spacesuits used on the space station like ILC Dover and Collins Aerospace, also newcomers to the spacesuit business such as Axiom Space, SpaceX and Blue Origin.

Axiom Space CEO Michael Suffredini and Burbank said their companies would be ready for demonstration missions to the moon by 2025.

There are three kinds of spacesuits: launch and re-entry, microgravity and planetary.

Microgravity suits like what the astronauts wear during spacewalks outside the International Space Station don't offer the mobility needed to walk around and work on the moon. For NASA's Artemis program, the astronauts will need planetary spacesuits capable of a wide range of leg and arm movement.

The current spacesuits used on the ISS, known as EMUs, were first developed for the space shuttle program and haven't had a significant update in decades. NASA's next-generation spacesuits called the xEMU are currently under development.

There are also flight suits, like what astronauts wear during launch and re-entry. SpaceX has already been using its sleek black-and-white flight suits for NASA astronauts who launch from Florida to the ISS. The SpaceX intravehicular (IVA) suit is a pressure suit, but it doesn't offer full life-support like EVA suits which are basically mini-spacecraft.

Even ahead of the selection, companies like SpaceX and Boeing had developed flight suits for their astronaut capsules. SpaceX is also designing a microgravity spacesuit for spacewalks outside of the Crew Dragon spacecraft.

Finding the perfect fit for every body 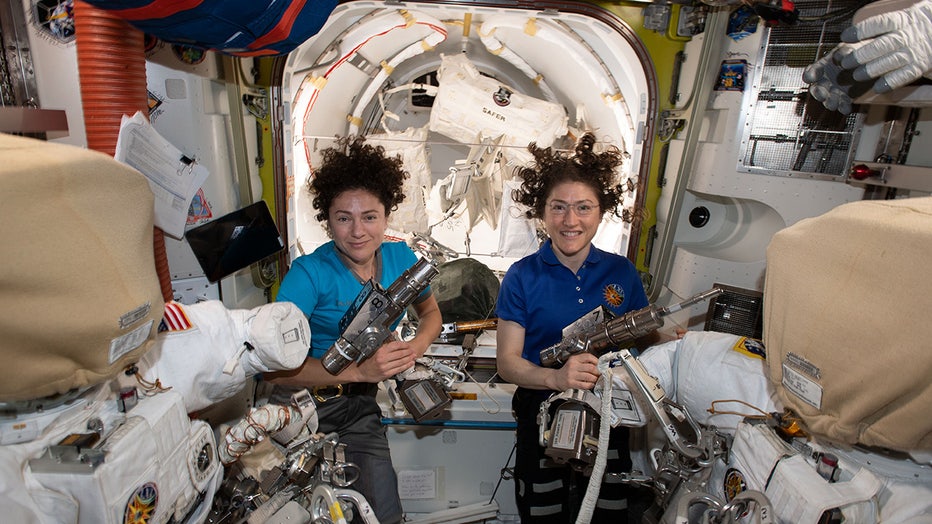 The current EMUs consist of a bottom half for the legs and an upper torso which start in size medium and go up, but the suits are not customized to an astronaut's body type. This became a problem in 2019 when there were not enough smaller EMU tops on the ISS to fit astronauts Anne McClain and Christina Koch for the first all-female spacewalk. NASA astronauts Jessica Meir and Koch would later complete the historic spacewalk in October 2019.

Burbank said Collins is testing for this scenario using a modular approach to tailor the suits to a person's needs.

"The test points for today were to prove that we could fit the taller crew members and the smaller crew members," Burbank said. "It was exactly the same suit. And we did a rapid resize. It took about thirty minutes between evolutions, and we went from somebody that was considerably shorter than I am, a shorter wingspan as well, and it worked really well."

NASA plans to land the first woman on the moon under the Artemis program. Burbank said the goal is to support the entire spectrum of crew members on a mission.

Using the foundations laid out by NASA's xEMU design, Burbank said Collins Aerospace wants to create a suit "so that the commander of Artemis-3, she may weigh 120 pounds on Earth, and so that she has got a suit as appropriately sized and tailored for her that doesn't feel like a spacecraft, but feels like a ruggedized set of extreme sports outerwear." 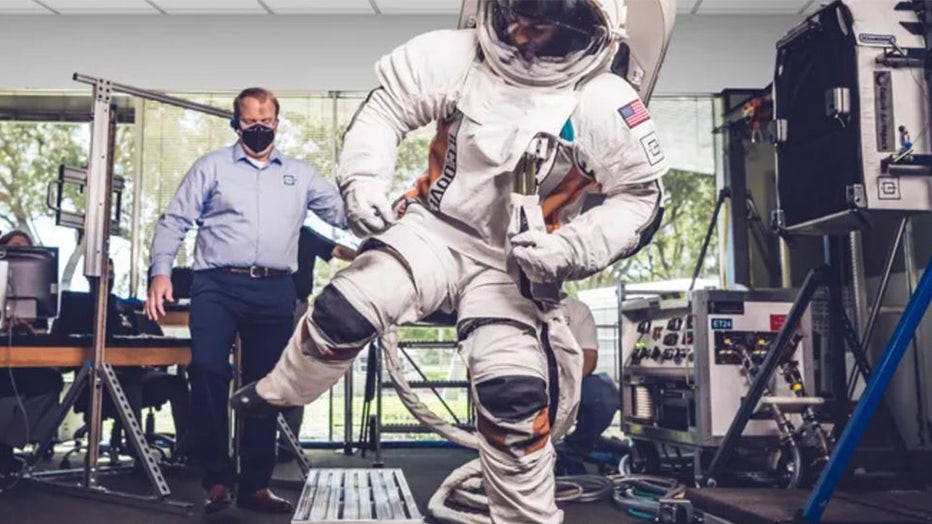 Suffredini said Axiom Space is still in the design and testing phase on its prototype suits. He said the plan is to evolve over the lifespan of the spacesuit.

"You want to build a suit that can evolve over time. So we'll build a suit. Everybody will be happy with it. We'll start using it. We will want to refine as we learn more," Suffredini said, adding, "I fully expect to see that over time it will involve a bit of a design and evolve it even more once you get to the lunar surface."

According to an Axiom Space post, the suits will be known as AxEMUs. The company has created a patch to reflect the history of extravehicular activities. 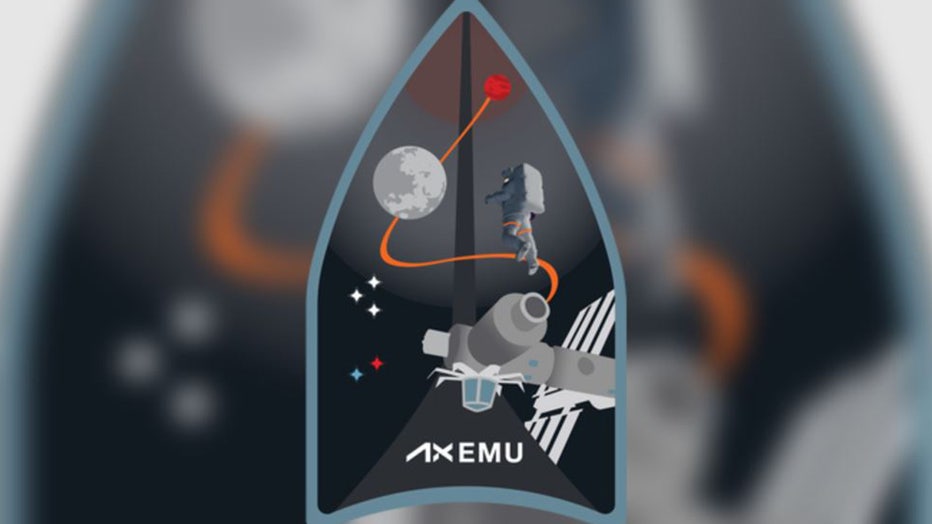 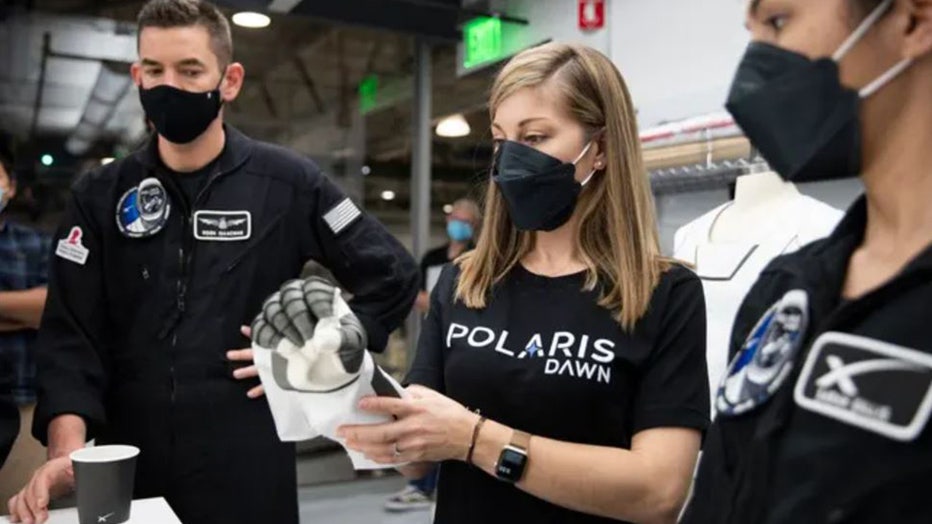 Beyond NASA's needs, private astronaut launches are increasing. SpaceX has launched two Crew Dragon missions with only private citizens in the past two years. One of those was with three Axiom Space customers.

The Polaris Program, a new private space program led by billionaire businessman Jared Isaacman, will fly several missions with SpaceX and include at least one spacewalk. The first Polaris Dawn mission is planned for late this year.

SpaceX's Crew Dragon spacecraft doesn't have an airlock, so this will require at least four new spacesuits to be ready as all four crew will need to wear pressurized spacesuits when the cabin is exposed to the vacuum of space.

Isaacman told FOX Weather in February SpaceX suit team and engineers were already making a lot of progress on the new EVA suit.

Suffredini said the public-private partnership with NASA will benefit both sides.

"We are building a space station. We have a need, and Axiom Space has a need for a spacesuit. We have a number of customers that already would like to do a spacewalk," Suffredini said. "We had planned to build a suit as part of our program. And so it's fantastic to have a partnership where we can benefit from the years of experience that NASA has and all the work they've done to advance the design to where it is today."