The NASA JPL team cheers as they receive video data from the rover of the Ingenuity Mars Helicopter flight.

CAPE CANAVERAL, Fla. - NASA made history with a successful first flight of its experimental helicopter on Mars, the first time an aircraft has flown on another planet.

The American space agency made its first controlled flight on the red planet early Monday, though the stream of data confirming its success was received a few hours later.

The triumph was hailed as a Wright Brothers moment. In a nod to past scientific exploration, the mini 4-pound helicopter named Ingenuity carried a bit of wing fabric from the 1903 Wright Flyer, which made similar history at Kitty Hawk, North Carolina.

"We can now say that human beings have flown a rotorcraft on another planet," project manager MiMi Aung announced to her team.

Flight controllers in California confirmed Ingenuity’s brief hop after receiving data from the Perseverance rover, which stood watch more than 200 feet away. Ingenuity hitched a ride to Mars on Perseverance, clinging to the rover’s belly upon their arrival in an ancient river delta in February.

The $85 million helicopter demo some 178 million miles away was considered high risk, yet high reward.

"Each world gets only one first flight," Aung noted earlier this month. Speaking on a NASA webcast early Monday, she called it the "ultimate dream." 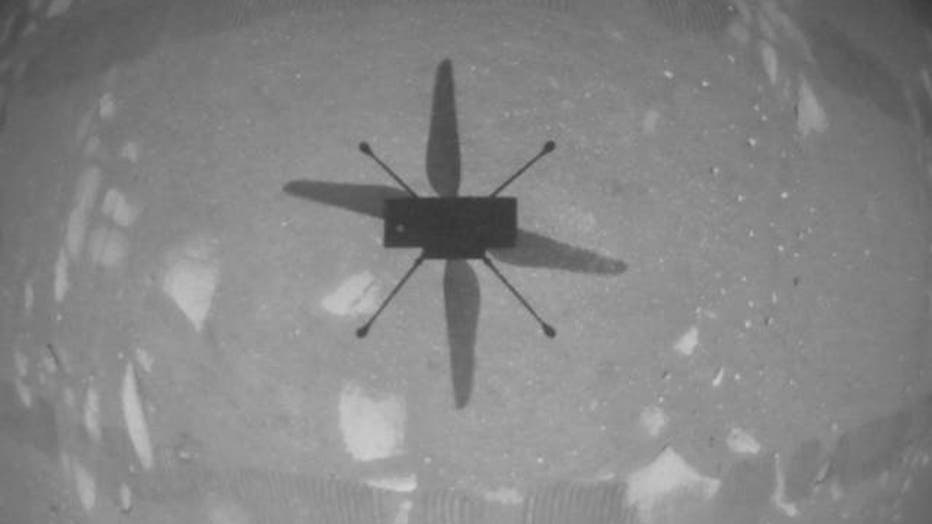 NASA’s Ingenuity Mars Helicopter captured this shot as it hovered over the Martian surface on April 19, 2021, during the first instance of powered, controlled flight on another planet. It used its navigation camera, which autonomously tracks the grou

NASA had scheduled the first flight attempt on April 11, but it was delayed after the machine signaled an issue in its data during a high-speed spin test.

A "watchdog" timer, which oversees the test and alerts NASA of any issues, also ended an April 9 test early as the flight computer tried transitioning from pre-flight to flight mode.

Aung said the agency had been testing two solutions to the "watchdog" timer issue over the last week. The first one involved adjusting the command sequence from Earth to slightly alter the timing of this transition. The second one was to modify and reinstall the existing flight control software, which has been stable and healthy for close to two years.

Aung said previously the first solution was the least disruptive to the helicopter. It required adding commands to the flight operations sequence and had already been tested on both Earth and Mars.

NASA had partnered with the Carillon Historical Park to include the tiny piece of fabric from the Wright brothers’ first aircraft, the 1903 Wright Flyer I.

The Wrights’ fabric provided NASA with the perfect way to include the pioneers on the first Martian flight. Engineers used an insulative tape to wrap the fabric, once called the "Pride of the West," around a cable located beneath Ingenuity’s solar panel.

Amanda Wright Lane and Stephen Wright, the great grand-niece and nephew of the Wright brothers, said their ancestors "would be pleased to know that a little piece of their 1903 Wright Flyer I is going to soar into history again on Mars."

Flying on Mars is not as easy as flying on Earth. Mars boasts significant gravity and the Martian atmosphere is only 1% as dense as Earth’s at the surface.

Earth gets twice as much solar energy as its outer neighbor during the day. And Martian nights can see temperatures as low as -130 degrees Fahrenheit, which can freeze unprotected electrical components.

This story was reported from Atlanta. Kelly Hayes contributed from Cincinnati.